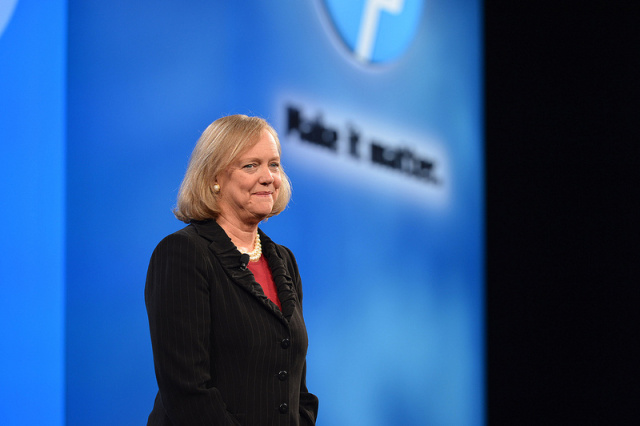 (P1) Computing giant Hewlett-Packard is close to breaking itself into two companies after CEO Meg Whitman ran out of options to turn around a business that is saddled with declining operations.

(P2) The decision to split itself in two, which could be announced as early as Monday, follows a months-long process to explore the sale of several business units, including its PC and enterprise services unit to no avail. The belief is that by splitting in two, both could pursue sales or acquisitions with a simpler balance sheet, which was an issue that sources said had scuttled a plan to buy EMC.

(P3) The move comes as Whitman begins her third year as HP’s CEO, and past the mid-way point of what she has described as a roughly five-year process to turn the company around with no revenue growth to show for.

(P4) Instead, HP will break into two — one comprised of its personal computers and printers divisions and another to house its corporate computing and IT services — sources briefed on the plan tell Re/code. HP will likely discuss the plan in detail at a meeting with financial analysts in San Jose, Calif. on Wednesday.

(P5) An HP spokeswoman declined to comment. The plan was first reported by The Wall Street Journal on Sunday.

(P6) Whitman will be head up of the enterprise IT company, and will be chairman of the PC and printing company. Dion Weisler, head HP’s printing and PC group, will be CEO of that company and Patricia Russo, an HP director, will be chairman, these sources said. The transaction will be structured as a distribution of shares to current HP shareholders.

(P7) The decision comes after a failed attempt at what it called “asset optimization,” an exercise led by Morgan Stanley to help it find buyers of units that it no longer saw as core to its strategy of expanding the selling of computing hardware, software and services to large companies.

(P8) HP approached both Lenovo and Dell about the possible sale of its $32 billion (2013 sales) PC operation. In both cases it was rebuffed.

(P9) In another case, HP approached two India-based companies, Wipro and Infosys about the possible sale of its $28 billion IT services unit, known as Enterprise Services. Again it was rebuffed.

(P10) In a third case, it approached IBM about the sales of its $1.2 billion Business Critical Server business, but was turned down.

(P11) It’s unclear how far HP got in talks with any of these outside companies, or whether or not they reached a formal phase.

(P12) HP also recently explored a strategic merger with data storage company EMC that would have created a $130 billion technology giant. In contemplating that proposed merger, HP was interested most in VMWare, the cloud software company which EMC controls.

(P13) The merger talks failed mainly because EMC wanted a higher valuation than HP was willing to pay. One other reason the talks may have failed was that HP and EMC viewed the declining PC and printer divisions as a drag on the combined operations, sources say. A split into two companies might set up a scenario down the road where HP and EMC re-open those merger talks combining the enterprise company with EMC.

(P14) The move would be a modified version of a strategic plan that HP’s prior CEO Léo Apotheker proposed in 2011, but which Whitman shelved after she took over as CEO in September of that year.

(P15) Apotheker, a former co-CEO of the business software company SAP, had sought to jettison HP’s PC business and transform the company into one more devoted to software. The lynchpin of this plan was the $10 billion acquisition of the British software firm Autonomy. HP has since conceded that it overpaid for Autonomy by about $5 billion. HP’s board fired Apotheker in the wake of that deal and tapped Whitman as CEO.

(P16) The split raises numerous questions. How much cash will HP put into the PC company? “Does this signal that HP is really going to go for it in PCs against Apple and Dell and Lenovo,” says analyst Patrick Moorhead, head on the research firm Moor Insights and Strategy. “Apple really owns the home premium experience in PCs, and everyone else is fighting over what’s left, and that’s all a very low-margin business.”

(P17) Another important question, Moorhead says: How will two companies deal with the loss in scale. One reason Whitman shelved Apotheker’s PC-spin off plan was, as she argued at the time, that it gave HP’s the size and scale to help it negotiate with component suppliers like Intel which supplies it with microprocessor chips, and Seagate, which supplies it with hard drives. “The two smaller companies will have less negotiating power than the combined HP does now.”

(P18) Once the global leader of the personal computer business, following its combination with Compaq Computer in 2002, HP has since fallen behind China’s Lenovo into the number two spot in the PC market.

Did you know that HP has made 110+ acquisitions since its inception in 1958? Many compare very competitive high-tech business as a war, and we are living through the time to witness IT dinosaurs faltering including HP and Microsoft. Watch closely how these big companies handle the difficult times, and the history might give you some wisdom of management for your own company someday.

Weekly_ArticleAugust 15, 2015
[EDUCATION ★★★] AS SOUTH KOREAN VILLAGES EMPTY, MORE PRIMARY SCHOOLS FACE CLOSINGS (P1) The post office PULLED UP STAKES and moved away years ago. The police station is long gone. And so is the bank. Over the years, the residents of …
END_OF_DOCUMENT_TOKEN_TO_BE_REPLACED 1

Weekly_ArticleJanuary 11, 2017
[World News ★] (P1) This news is about a man. He is from Vietnam. He has a traffic accident. He goes to the hospital. Doctors operate on him. (P2) He leaves the hospital. He is not OK. He is in pain. (P3) Doctors …
END_OF_DOCUMENT_TOKEN_TO_BE_REPLACED 1

BEING AN ENTREPRENEUR IS HARD

Business, Weekly_ArticleJanuary 3, 2016
[BUSINESS ★★] BEING AN ENTREPRENEUR IS HARD (P1) Our society CRAVES INSTANT GRATIFICATION — we want things now and we want them fast. (P2) Entrepreneurship is much cooler than it was years ago. (P3) The thought of being an entrepreneur is …
END_OF_DOCUMENT_TOKEN_TO_BE_REPLACED 1