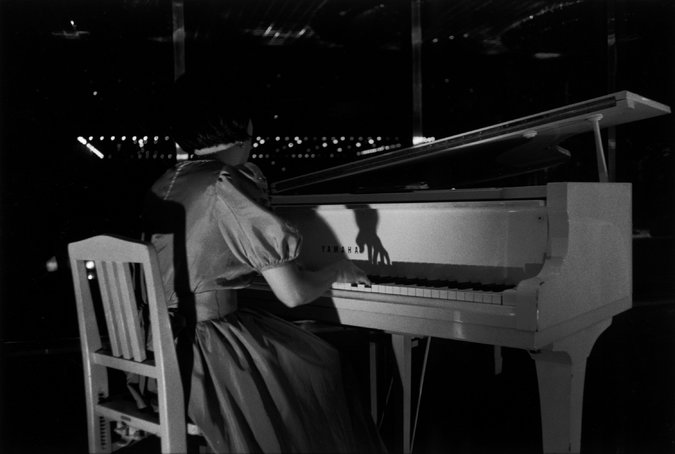 (P1) A COUPLE of years ago, I got a call from the husband of Peg Bachelder, my daughter Hunter’s piano teacher. “Peg’s in the hospital,” Martin said. She’d been treated in 2010 for a rare pelvic cancer requiring chemotherapy, radiation and radical surgery.

(P2) She returned to teaching and refilled her student roster in no time. She was in her early 60s, tall, with a lovely, gentle way that made her immensely popular. Two years later, however, she developed a leukemia-like malignancy caused by her treatment. She went back on chemotherapy but somehow kept teaching. Then for two straight weeks, Peg postponed Hunter’s lessons. That was when I got Martin’s call from the hospital.

(P3) He put his cell on speaker for Peg. She sounded weak and spoke in long pauses. She said the leukemia treatment was not working. It had impaired her immune system, however, making her sick with fevers and an infection. Imaging also showed that her original cancer had come back in her hip and liver. The recurrent disease caused immobilizing hip pain and made her incontinent. That was when she checked into the hospital. She didn’t know what to do.

(P4) What had the doctors said they could do? I asked.

(P5) “Not much,” she said. She sounded utterly hopeless. They were giving her blood transfusions, pain medications and steroids for the fevers caused by her tumor. They’d stopped giving her chemotherapy.

(P6) This is the moment we continue to debate in our country. What is it we think should happen now? Her condition was incurable by established means. So should she press the doctors for other treatments, experimental therapies, anything with even a remote chance of keeping her going, no matter what? Or should she “give up”?

(P7) Neither seemed right. But for more than a decade in medical practice, I had not really understood what other choices might exist. I wasn’t effective in these situations. And it bothered me — as a surgeon caring for patients with problems I often could not fix and then as a son with a father in his 70s experiencing mounting difficulties in his life. So for three years, I researched a book on what has gone wrong with the way we manage mortality and how we could do better.

(P8) I spoke with more than 200 people about their experiences with aging or serious illness, or dealing with a family member’s — many of them my own patients, some in my own family. I interviewed and shadowed front-line staff members in old age homes, palliative– care specialists, hospice workers, geriatricians, nursing home reformers, pioneers, and contrarians. And among the many things I learned, here are the two most fundamental.

(P9) First, in medicine and society, we have failed to recognize that people have priorities that they need us to serve besides just living longer. Second, the best way to learn those priorities is to ask about them. Hence the wide expert agreement that payment systems should enable health professionals to take sufficient time to have such discussions and tune care accordingly.

(P10) I also discovered that the discussions most successful clinicians had with patients involved just a few important questions that often unlocked transformative possibilities: (1) What is their understanding of their health or condition? (2) What are their goals if their health worsens? (3) What are their fears? and (4) What are the trade-offs they are willing to make and not willing to make? These discussions must be repeated over time, because people’s answers change. But people can and should insist that others know and respect their priorities.

(P11) Not everyone will feel ready to discuss such subjects, to be sure. But I decided to try the questions with Peg. I asked her what her understanding of her condition was. She said flat out that she knew she was going to die. There’s nothing more they can do, she said, an edge of anger in her voice.

(P12) I asked what her goals were. She didn’t have any that she could see were possible. Then I asked what her fears for the future were, and she named a litany: facing more pain, suffering the humiliation of losing more of her bodily control, being unable to leave the hospital. She choked up as she spoke. She’d been there for days just getting worse, and she feared she didn’t have many more. They’d talked to her about stopping life-prolonging therapy and going on hospice, but she didn’t see how that could help her.

(P13) Someone in her position who was offered “death with dignity” — assisted death — might have taken it as the only chance for control in the absence of other options. But hearing her fears, I suggested that Peg try hospice. It’d at least let her get home, I said, and might help her more than she knew. Hospice’s aim, at least in theory, I explained, is to give people their best possible day, however they might define it under the circumstances. It seemed as if it had been a while since she’d had a good day.

(P15) That seemed worth hoping for, I said. Just one good day.

(P16) With her husband’s encouragement, she went home on hospice less than 48 hours later. We broke the news to Hunter, then just 13 years old, that Peg could not teach her anymore, that she was dying. Hunter was struck low. She asked if she could see Peg one more time. We didn’t think so, we said.

(P17) A few days later, however, we got a surprising call from Peg. She wanted to resume teaching. She’d understand if Hunter didn’t want to come. She didn’t know how many more lessons she could manage, but she wanted to try.

(P18) That hospice could make teaching possible for her again was more than I’d imagined. But when her hospice nurse arrived, she asked Peg what she cared most about in her life, what having the best day possible meant to her. Then they worked together to make it happen.

(P19) Her first goal was just managing her daily difficulties. The hospice team put a hospital bed on the first floor so she wouldn’t have to navigate the stairs, organized a plan for bathing and dressing, adjusted her pain medications until they were right. Her anxieties plummeted as the challenges came under control. She raised her sights.

(P20) “She was focused on the main chance,” Martin later said. “She came to a clear view of how she wanted to live the rest of her days. She was going to be home, and she was going to teach.”

(P21) It took planning and great expertise to make each lesson possible. The nurse helped her learn how to calibrate her medications. “Before she would teach, she would take some additional morphine. The trick was to give her enough to be comfortable to teach and not so much that she would be groggy,” Martin recalled.

(P22) Nonetheless, he said, “She was more alive running up to a lesson and for the days after.” She’d had no children; her students filled that place for her. And she still had some things she wanted them to know before she went. “It was important to her to be able to say her goodbyes to her dear friends, to give her parting advice to her students.”

(P23) Medicine has forgotten how vital such matters are to people as they approach life’s end. People want to share memories, pass on wisdoms and keepsakes, connect with loved ones, and to make some last contributions to the world. These moments are among life’s most important, for both the dying and those left behind. And the way we in medicine deny people these moments, out of obtuseness and neglect, should be cause for our unending shame.

(P24) Peg, however, got to fulfill her final role. She lived six weeks after going on hospice. Hunter had lessons for four of those weeks, and two final concerts were played. One featured Peg’s current students, all younger children; the other, her former students from around the country. Gathered in her living room, they played Brahms, Chopin and Beethoven for their adored teacher. A week later, she fell into delirium and, a short time after that, died peacefully in her bed.

(P25) My final remembrance of Peg is from the end of her last recital with the children. She’d taken each student away from the crowd to give a personal gift and say a few words. When it was Hunter’s turn, Peg gave her a book of music. Then she put her arm around her.

(P26) “You’re special,” she whispered to her. It was something she never wanted her students to forget.

THE TYPOGRAPHY OF SPEED

Thoughts, Weekly_ArticleOctober 20, 2014
A comment on BMW’s design and its relationship to typography as part of their design curriculum. Original Article [Thoughts★★]The Typography of Speed (P1) Cars and glyphs: They’re not so far apart. In an industry like car manufacturing, where the tiniest …
END_OF_DOCUMENT_TOKEN_TO_BE_REPLACED

What does “what are you up to?” mean in English?

Q&A, UncategorizedJanuary 11, 2020
“What are you up to?” means the same as “What are you doing?” It is a very common way to greet someone and open a conversation. Generally, an extended answer is not expected. You can simply say “not much”, followed …
END_OF_DOCUMENT_TOKEN_TO_BE_REPLACED

Verizon to Buy Yahoo for $4.8B

Business, Weekly_ArticleAugust 3, 2016
[Business ★★★] (P1) Verizon will acquire Yahoo, once valued at more than $125 billion, for $4.8 billion, a source tells the Wall Street Journal. An official announcement of the deal, which will end an auction process that began five months ago, is …
END_OF_DOCUMENT_TOKEN_TO_BE_REPLACED 1

Weekly_ArticleNovember 3, 2015
Describe the video/image. Challenge yourself to tell a lively and interesting story. Suggested expressions to use: “An eye for an eye will only make the whole world blind.”  ― Mahatma Gandhi “Revenge proves its own executioner.” ― John Ford, The Broken …
END_OF_DOCUMENT_TOKEN_TO_BE_REPLACED