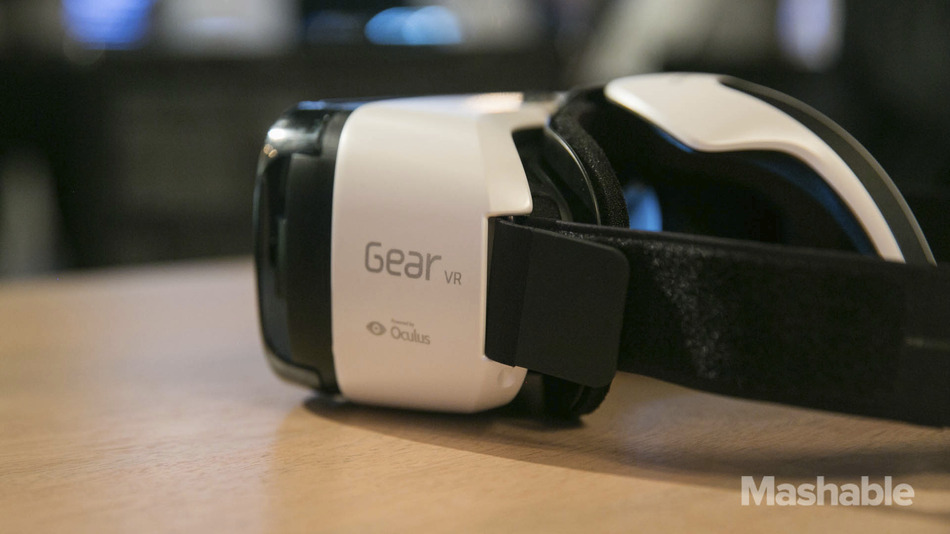 (P1) Oculus Rift creator Palmer Luckey doesn’t think the just-announced Gear VR mobile virtual reality headset he’s building for Samsung is going to compete with his Oculus Rift headset, which is still not available to the public. In fact, he predicts customers will want to buy both — though no price or release date has been set for either.

(P3) Luckey and Oculus VR Chief Executive Brendan Iribe spoke to Mashable Thursday morning, a day after the company announced a partnership with Samsung to create the Gear VR, a mobile headset powered by the Galaxy Note 4 phablet due out later this fall. The Gear VR is a more portable and affordable virtual reality option than the regular Oculus Rift headset.

(P4) “There are a number of advantages mobile gives you when you’re untethered,” Iribe said. “No cable attached to the headset and nothing at your side is really freeing. It’s much easier to carry around and show friends.”

(P5) While some fans of the Oculus Rift may worry that the Gear VR is a pivot from the original vision of a headset meant for high-powered PC experiences, Luckey said that isn’t the case. Luckey’s vision “has always been getting as many people into virtual reality as possible,” Iribe said. “Mobile VR is important in doing that.”

(P6) Creating a mobile experience was something Oculus had been working on for a year, even before it was snapped up by Facebook. The effort was spearheaded by Chief Technology Officer John Carmack. (Carmack and Oculus VR are currently named in a lawsuit from his former employer, ZeniMax Software, which claims Carmack brought ideas from id Software to Oculus when he left last August.) Iribe says Carmack has been instrumental in “getting under the hood” of the mobile virtual reality software and hardware.

(P7) Also instrumental was Oculus VR’s partnership with Samsung. The AMOLED screen found on many of the Samsung phones and phablets is critical to getting low-latency images with virtual reality, Iribe explained. That isn’t achievable on a LCD screen.

(P8) Too much latency, and you’ll see a motion blur when you move your head inside virtual reality, which can induce motion sickness in some users. It’s the reason the second-generation Oculus Rift development kit contained a Samsung Galaxy Note screen.

(P9) Samsung and Qualcomm made a large number of modifications to the Note 4 to make it virtual reality compatible, including tweaks to the phone’s graphical processing unit, sensors and operating system. There are also sensors in the Gear VR headset, to which the Note 4 connects. “The built-in phone sensors don’t work as well for VR,” Luckey said. “That’s why you can’t just put any phone in a 3D-printed thing or a piece of cardboard [like Google did] and expect the same experience. “Most of those are pretty terrible experiences just riding the VR hype wave,” he said.

(P10) Giving people a virtual reality experience that keeps them coming back — captivating from the first experience — is a must for Oculus VR, the pair said. Iribe believes it’s especially important to manage expectations about what kind of experience you’re going to have. That’s why the Gear VR is being branded as the Innovator Edition and is being targeted more toward enthusiasts and developers than regular users.

(P12) “You can kind of think of it as the Google Glass explorer edition, but it’s a little more open than that. It’s not a consumer product, but make it clear to people what they are buying into,” Luckey said. “But I will freely admit we don’t have any control on making sure people have a good experience early on, which is something we are trying to solve. So we are clear with the messaging.”

(P13) Why not wait and release Gear VR later, when it’s capable of offering a full consumer version? Oculus VR wants to turn skeptical mobile and console developers into committed ones by showing them the hardware works, Iribe said. “A lot of these big, triple-A companies have learned a hard lesson of waiting too long before,” Iribe said. “Many big companies wrote off mobile gaming for far too long. It’s easy to remind them, ‘You don’t want to miss the next big industry, do you?'”

(P14) “And if we didn’t start this now, there wouldn’t be a market for it later,” Luckey added.

Thoughts, Weekly_ArticleOctober 20, 2014
A comment  Original Article [Thoughts★★★] The Best Possible Day (P1) A COUPLE of years ago, I got a call from the husband of Peg Bachelder, my daughter Hunter’s piano teacher. “Peg’s in the hospital,” Martin said. She’d been treated in …
END_OF_DOCUMENT_TOKEN_TO_BE_REPLACED

THE DIFFERENCE BETWEEN ‘GOOD ON PAPER’ AND ‘GOOD FOR YOU’

Life, Weekly_ArticleOctober 28, 2014
Comment [Life★] The Difference Between “Good on Paper” and “Good For You” (P1) If you’re on Match.com or any other online dating site like my friend J, you’ve likely already learned this lesson: Men who look good on paper don’t …
END_OF_DOCUMENT_TOKEN_TO_BE_REPLACED

Opinions, Weekly_ArticleJuly 24, 2015
[OPINION ★★] PEOPLE, NOT TECHNOLOGY, ADVANCE CHANGE (P1) We live in a time of both BREATHTAKING technological surprise and UNNERVING global challenges. The result is that we are chattering away on our increasingly technologically sophisticated smart-phones, and social media platforms, about …
END_OF_DOCUMENT_TOKEN_TO_BE_REPLACED 1

NO ONE CAN BREATHE IN BEIJING

Weekly_ArticleDecember 13, 2015
[WORLD NEWS ★] NO ONE CAN BREATHE IN BEIJING (P1) SMOG that is expected to cover Beijing for at least three days led to the capital’s first ever “red ALERT” on Tuesday as many residents IGNORED warnings to limit their time outdoors. …
END_OF_DOCUMENT_TOKEN_TO_BE_REPLACED 1