APPLE PAY: WHO WON AND WHO LOST?

With so many services rapidly adapting to mobile usage, it’s no surprise that mobile payment systems are on the rise. 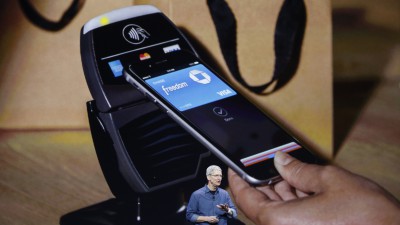 Not all Apple Pay winners are created equal

(P1) Mobile payments are happening to the retail industry like bankruptcy happens to Mike Campbell in Ernest Hemingway’s The Sun Also Rises: gradually, and then suddenly all at once. Google has offered mobile payments for three years, and Walmart and Best Buy have been talking about mobile pay since 2012. But Apple is one of the few companies that many observers say can quickly lead a critical mass of people to wave their phones in the air for everything from bed sheets to burgers.

(P2) Retailers, credit card companies and banks all have made big bets on Apple’s new mobile payment system, which makes it more likely to succeed. “We will put our shoulders into a big step change like this,” says Matt Dill, a senior vice president at Visa, an Apple Pay partner, in an interview with TIME. “Apple Pay is a tipping point for major institutions going all in.”

(P3) If Apple Pay becomes as ubiquitous as most observers expect, it won’t just change the way consumers pay for things, it’ll reshape the financial institutions that facilitate our purchases. That’s not good news for everyone — many companies felt pushed to join up with Apple so they weren’t left behind. For some, it was either the Apple Pay-way or the highway.

Here’s a list of the major players, roughly in order of who won the most to who won the least.

(P4) Apple. Every time a customer make a purchase with Apple Pay, Apple earns a 0.15% charge. That doesn’t seem like a lot, but researchers say it’ll add up in the long run. Equity analysts at Nomura estimated that charge will account for $1.6 billion in projected revenue by 2017. On the lower end of estimates, Piper Jaffray analyst Gene Munster says that Apple Pay will generate revenue of $118 million in 2015 and $310 million in 2016.

(P5) Perhaps more importantly, Apple Pay, if successful, will increase demand for Apple devices. And once customers are using Apple Pay and all their purchases are wrapped up to their phones, it’ll be that much harder to leave Apple for Android or another smartphone platform.

(P6) “Just getting part of the transaction itself will be big” for Apple, says Rajesh Kandaswamy, researcher at Gartner. But “the largest issue is it’s harder to switch away if you’re an iPhone user.”

(P7) Banks. Consumers won’t have to pay for Apple’s 0.15% fee on Apple Pay transactions; banks will. The six big banks who have signed up for Apple Pay aren’t enthusiastic about that. But in the long run, banks expect Apple Pay will push people away from using cash and toward transactions that run over their networks. Online shopping will be faster, too, as customers won’t have to input their billing information every time they make a purchase.

(P8) Finally, because Apple Pay uses a difficult-to-hack system that encrypts all financial transactions, banks will experience less cybercrime breaches for which they’re held financially liable. “Banks are going to make less money on the transaction than if it were made on a regular card swipe” because of Apple’s fee, says Michelle Evans, an analyst at Euromonitor, “but they can make more money in the end if they can drive volume over the card network and reduce fraud.”

(P9) Credit Card Companies. Visa, MasterCard and American Express have loudly trumpeted Apple Pay’s rollout. They stand to make money off Apple Pay for the same reason the banks will: the program pushes customers to their global credit business. Dill, the Visa SVP, calls Apple Pay an “on-ramp” to Visa’s network and a growth-fueler. “If we didn’t encourage innovation” like Apple Pay, “then we would be the worst enemy to our own growth,” Dill says.

(P10) But there’s another reason credit card companies are enthusiastic about Apple Pay: the alternative, CurrentC, could be pretty scary. CurrentC is a payment system mega retailers like Walmart and Best Buy are working on that could cut out credit card companies altogether. While Apple Pay leaves the traditional credit card system intact by simply moving it to your phone, analysts speculate that the CurrentC program will link payments through a network connected directly to your savings account. Voila: no middleman.

(P11) “If a technology comes along that’s focused on getting you to not use Visa, then that’s a competitor to us,” says Dill. The threat of CurrentC makes Apple Pay look more like a rickety lifeboat for the credit card companies than the super-fast motorboat Apple has promised.

(P12) Retailers and Merchants. Walgreens, Macy’s, McDonald’s and other merchants that began using Apple Pay on Monday get the same bonus that they have always gotten from debit cards and credit cards: new customers who can spend money faster. If customers spend money more easily, retailers make money more easily.

(P14) But Apple Pay also reinforces a system that retailers never really liked: they have to continue to pay a fee for every credit and debit card transaction. “Retailers don’t like the fees they pay,” says Kandaswamy. “Apple Pay is going to consolidate power among the same players even more.” CurrentC, on the other hand, could allow retailers to collect customer-specific data. That would let businesses like Walmart target customers with products in the same way that Google or Facebook target their ads.

(P15) Two days into Apple Pay, there aren’t yet any data on the program’s success. It’s too early to know how many people have used it or how much money Apple has made from it. But financial institutions believe the way we pay for things is changing quickly, even if we don’t quite notice it yet. “The U.S. is in midst of an innovation in payments,” Carolyn Balfany, senior vice president at MasterCard, tells TIME. “Payment security is going to change more in the next five years than it has in the past 50.” If Apple Pay does take off, then it is happening gradually before it’s here all of a sudden.

Business, Weekly_ArticleOctober 20, 2014
A comment [Business ★★★]HP Returns to Breakup Plan It Shelved Three Years Ago  (P1) Computing giant Hewlett-Packard is close to breaking itself into two companies after CEO Meg Whitman ran out of options to turn around a business that is …
END_OF_DOCUMENT_TOKEN_TO_BE_REPLACED

Opinions, Weekly_ArticleSeptember 13, 2015
[OPINION ★★★] END ONLINE COMMENTS (P1) It shouldn’t be a surprise that I’m not fond of comments sections. I think you’d be HARD-PRESSED to find many female writers who are. On most sites – from YouTube to local newspapers – comments …
END_OF_DOCUMENT_TOKEN_TO_BE_REPLACED

THE UNKNOWN PYRAMIDS OF SUDAN

Weekly_ArticleJanuary 23, 2016
[TRAVEL ★★★] THE UNKNOWN PYRAMIDS OF SUDAN (P1) We had been LURED to Sudan by a friend who had spent three years teaching English in a school in Khartoum. He told many FASCINATING ANECDOTES about exploring ancient Nubia, cooking over CAMPFIRES …
END_OF_DOCUMENT_TOKEN_TO_BE_REPLACED 1

Lifestyle, Weekly_ArticleDecember 20, 2016
[Lifestyle ★] (P1) A German couple likes Christmas. They have Christmas decorations. They buy more and more decorations every year. Now they have many decorations. (P2) They start decorating in October. They take 8 weeks to set everything up. They put 100 Christmas …
END_OF_DOCUMENT_TOKEN_TO_BE_REPLACED 3