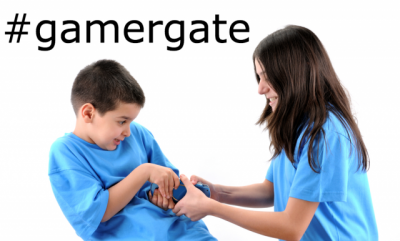 (P1) The Pew Research Center on Wednesday released a study about online harassment. According to the study, which asked 2,849 people about different forms of online harassment, 73% of respondents said they’ve seen someone else being harassed, whereas 40% of people say they experienced it for themselves.

(P2) The study breaks up the harassment into two categories: less-severe harassment, such as name-calling and embarrassment. The other type of harassment is more severe: stalking, sexual harassment, and being the target of personal threats. 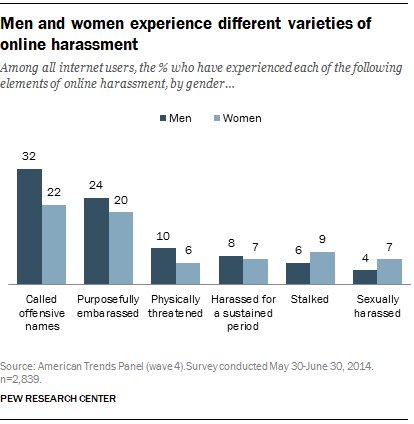 (P7) The study was conducted in June, however, which is before the GamerGate controversy began.

Life, Weekly_ArticleOctober 28, 2014
Comment [Life★★]This Iranian Pop Star Has a Point (P1) After fleeing Iran as a child, the singer known as Arghavan is out to unmuzzle her countrywomen. So what if it’s risky? (P2) On May 10 in Stockholm, Sweden, Arghavan, 31, …
END_OF_DOCUMENT_TOKEN_TO_BE_REPLACED

Weekly_ArticleApril 22, 2015
[Business★★] Prepare for the largest wealth transfer in history [Business★★★] Signs That You Lack Emotional Intelligence [Thoughts★★★] The Curious Science of When Multitasking Works [Thoughts★★★] Man’s best friend was a late arrival in the Americas [Life★] Do You Need to …
END_OF_DOCUMENT_TOKEN_TO_BE_REPLACED

Technology, Weekly_ArticleJanuary 3, 2016
[TECHNOLOGY ★] US MARINES DROP GOOGLE’S “ROBO-DOGS” (P1) Some ideas are so cool that it’s easy to OVERLOOK important details. (P2) When first introduced, the LS3 robot dogs created by Google-owned Boston Dynamics seemed like they could be very useful. (P3) It …
END_OF_DOCUMENT_TOKEN_TO_BE_REPLACED 1