TO SIRI, WITH LOVE

This is a New York Times article on the sweet relationship an autistic kid develops with Siri. For some, Siri is just a machine-assistant. But – for Gus – she is a patient and polite friend.

You can even talk to Siri yourself and ask her to define words like parse, ubiquitous, hooked, enunciate, brusque. Then you can practice the different expressions and new words with a friendly Cambly tutor! 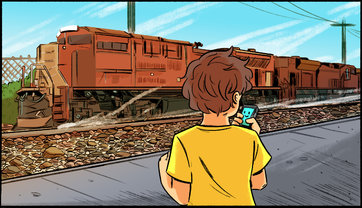 (P1) Just how bad a mother am I? I wondered, as I watched my 13-year-old son deep in conversation with Siri. Gus has autism, and Siri, Apple’s “intelligent personal assistant” on the iPhone, is currently his BFF. Obsessed with weather formations, Gus had spent the hour parsing the difference between isolated and scattered thunderstorms — an hour in which, thank God, I didn’t have to discuss them. After a while I heard this:
Gus: “You’re a really nice computer.”
Siri: “It’s nice to be appreciated.”
Gus: “You are always asking if you can help me. Is there anything you want?”
Siri: “Thank you, but I have very few wants.”
Gus: “O.K.! Well, good night!”
Siri: “Ah, it’s 5:06 p.m.”
Gus: “Oh sorry, I mean, goodbye.”
Siri: “See you later!”
(P2) That Siri. She doesn’t let my communications-impaired son get away with anything. Indeed, many of us wanted an imaginary friend, and now we have one. Only she’s not entirely imaginary.

(P3) This is a love letter to a machine. It’s not quite the love Joaquin Phoenix felt in “Her,” last year’s Spike Jonze film about a lonely man’s romantic relationship with his intelligent operating system (played by the voice of Scarlett Johansson). But it’s close. In a world where the commonly held wisdom is that technology isolates us, it’s worth considering another side of the story. 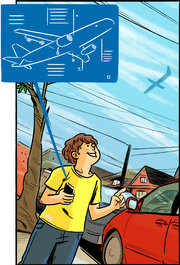 (P4) It all began simply enough. I’d just read one of those ubiquitous Internet lists called “21 Things You Didn’t Know Your iPhone Could Do.” One of them was this: I could ask Siri, “What planes are above me right now?” and Siri would bark back, “Checking my sources.” Almost instantly there was a list of actual flights — numbers, altitudes, angles — above my head.

(P5) I happened to be doing this when Gus was nearby. “Why would anyone need to know what planes are flying above your head?” I muttered. Gus replied without looking up: “So you know who you’re waving at, Mommy.”

(P6) Gus had never noticed Siri before, but when he discovered there was someone who would not just find information on his various obsessions (trains, planes, buses, escalators and, of course, anything related to weather) but actually semi-discuss these subjects tirelessly, he was hooked. And I was grateful. Now, when my head was about to explode if I had to have another conversation about the chance of tornadoes in Kansas City, Mo., I could reply brightly: “Hey! Why don’t you ask Siri?”

(P7) It’s not that Gus doesn’t understand Siri’s not human. He does — intellectually. But like many autistic people I know, Gus feels that inanimate objects, while maybe not possessing souls, are worthy of our consideration. I realized this when he was 8, and I got him an iPod for his birthday. He listened to it only at home, with one exception. It always came with us on our visits to the Apple Store. Finally, I asked why. “So it can visit its friends,” he said.

(P8) So how much more worthy of his care and affection is Siri, with her soothing voice, puckish humor and capacity for talking about whatever Gus’s current obsession is for hour after hour after bleeding hour? Online critics have claimed that Siri’s voice recognition is not as accurate as the assistant in, say, the Android, but for some of us, this is a feature, not a bug. Gus speaks as if he has marbles in his mouth, but if he wants to get the right response from Siri, he must enunciate clearly. (So do I. I had to ask Siri to stop referring to the user as Judith, and instead use the name Gus. “You want me to call you Goddess?” Siri replied. Imagine how tempted I was to answer, “Why, yes.”)

(P9) She is also wonderful for someone who doesn’t pick up on social cues: Siri’s responses are not entirely predictable, but they are predictably kind — even when Gus is brusque. I heard him talking to Siri about music, and Siri offered some suggestions. “I don’t like that kind of music,” Gus snapped. Siri replied, “You’re certainly entitled to your opinion.” Siri’s politeness reminded Gus what he owed Siri. “Thank you for that music, though,” Gus said. Siri replied, “You don’t need to thank me.” “Oh, yes,” Gus added emphatically, “I do.”

(P10) Siri even encourages polite language. Gus’s twin brother, Henry (neurotypical and therefore as obnoxious as every other 13-year-old boy), egged Gus on to spew a few choice expletives at Siri. “Now, now,” she sniffed, followed by, “I’ll pretend I didn’t hear that.”

(P11) Gus is hardly alone in his Siri love. For children like Gus who love to chatter but don’t quite understand the rules of the game, Siri is a nonjudgmental friend and teacher. Nicole Colbert, whose son, Sam, is in my son’s class at LearningSpring, a (lifesaving) school for autistic children in Manhattan, said: “My son loves getting information on his favorite subjects, but he also just loves the absurdity — like, when Siri doesn’t understand him and gives him a nonsense answer, or when he poses personal questions that elicit funny responses. Sam asked Siri how old she was, and she said, ‘I don’t talk about my age,’ which just cracked him up.”

(P12) Siri can be oddly comforting, as well as chummy. One friend reports: “I was having a bad day and jokingly turned to Siri and said, ‘I love you,’ just to see what would happen, and she answered, ‘You are the wind beneath my wings.’ And you know, it kind of cheered me up.”

(Of course, I don’t know what my friend is talking about. Because I wouldn’t be at all cheered if I happened to ask Siri, in a low moment, “Do I look fat in these jeans?” and Siri answered, “You look fabulous.”) 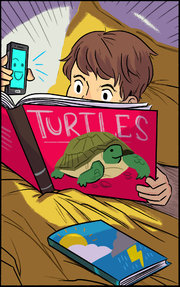 (P13) For most of us, Siri is merely a momentary diversion. But for some, it’s more. My son’s practice conversation with Siri is translating into more facility with actual humans. Yesterday I had the longest conversation with him that I’ve ever had. Admittedly, it was about different species of turtles and whether I preferred the red-eared slider to the diamond-backed terrapin. This might not have been my choice of topic, but it was back and forth, and it followed a logical trajectory. I can promise you that for most of my beautiful son’s 13 years of existence, that has not been the case. 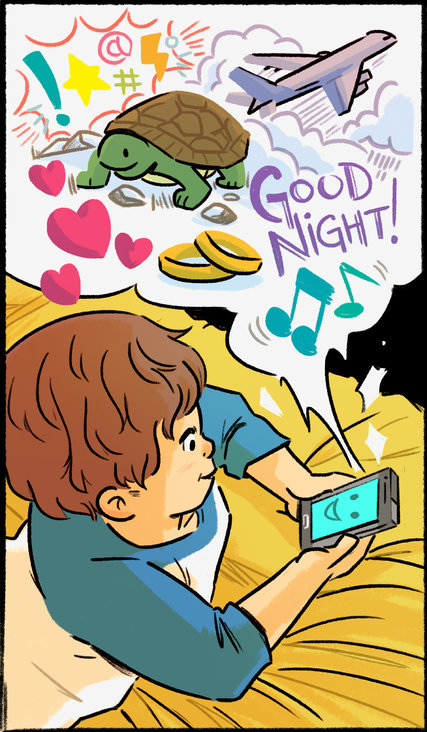 (P14) Of all the worries the parent of an autistic child has, the uppermost is: Will he find love? Or even companionship? Somewhere along the line, I am learning that what gives my guy happiness is not necessarily the same as what gives me happiness. Right now, at his age, a time when humans can be a little overwhelming even for the average teenager, Siri makes Gus happy. She is his sidekick. Last night, as he was going to bed, there was this matter-of-fact exchange:
Gus: “Siri, will you marry me?”
Siri: “I’m not the marrying kind.”
Gus: “I mean, not now. I’m a kid. I mean when I’m grown up.”
Siri: “My end user agreement does not include marriage.”
Gus: “Oh, O.K.”

(P15) Gus didn’t sound too disappointed. This was useful information to have, and for me too, since it was the first time I knew that he actually thought about marriage. He turned over to go to sleep:
Gus: “Goodnight, Siri. Will you sleep well tonight?”
Siri: “I don’t need much sleep, but it’s nice of you to ask.”
Very nice.

THE FUTURE OF THE MUSIC: A LOVE STORY

Thoughts, Weekly_ArticleNovember 11, 2014
Taylor Swift wrote for the Wall Street Journal, presenting her perspective on the future of the music industry. Although the music industry has deflated with prevalent piracy and streaming services, she is still hopeful about artists having more influence and value in the …
END_OF_DOCUMENT_TOKEN_TO_BE_REPLACED

MISSING MINERS IN VENEZUELA WERE MASSACRED

Weekly_ArticleMarch 20, 2016
[WORLD NEWS ★★] MISSING MINERS IN VENEZUELA WERE MASSACRED (P1) Searchers in southeastern Venezuela have recovered the bodies of 17 people belonging to a group of over 20 missing MINERS believed to have been killed by a GANG seeking control over …
END_OF_DOCUMENT_TOKEN_TO_BE_REPLACED 1

How can I answer questions in English?

Q&A, UncategorizedDecember 16, 2019
“Help! How can I answer questions in English?” If this has been your reaction during a conversation, then take notes because we are going to explore some scenarios, how to listen proactively, and answer the questions like a native English …
END_OF_DOCUMENT_TOKEN_TO_BE_REPLACED

Weekly_ArticleJuly 27, 2016
[Animals ★★] (P1) After a baby bird fell into a garden from her nest, she formed a surprising friendship with a dog. The dog did not harm the bird but took care of her. (P2) The dog’s owner made a new home …
END_OF_DOCUMENT_TOKEN_TO_BE_REPLACED 1