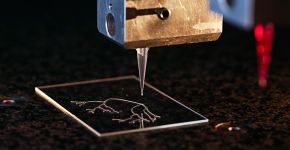 (P1) In February of 2012, a medical team at the UNIVERSITY OF MICHIGAN’s C. S. Mott Children’s Hospital, in Ann Arbor, carried out an unusual operation on a three-month-old boy. The baby had been born with a rare CONDITION called TRACHEOBRONCHOMALACIA: the tissue of one portion of his airway was so weak that it collapsed. This made breathing very difficult, and it regularly blocked VITAL blood vessels nearby. The infant was placed on a VENTILATOR, while the medical team set about figuring out what to do.

(P2) The area of weak tissue would somehow need to be repaired or replaced—a major and dangerous operation in so small a patient. The team consulted with the baby’s doctors at Akron Children’s Hospital, in Ohio, and they soon agreed that they had just the right tool for this delicate, lifesaving task: a 3-D printer.

(P3) AS ITS NAME SUGGESTS, a 3-D printer prints ink not on a flat surface, such as paper, but in THREE DIMENSIONS, in layers. The first 3-D printers were developed in the 1980’s, by an American engineer named Charles Hull. The “ink” was an liquid that turned solid when exposed to ULTRAVIOLET LIGHT, typically from a LASER BEAM.

(P5) In the United States, debates have ERUPTED over whether citizens should be allowed to 3-D-print handguns at home, which the technology makes possible. Today’s printers print in plastics, and also in silver, gold, and other metals, along with ceramics, wax, and even food.

(P6) The medical procedure at the University of Michigan worked on a similar principle. The researchers began by taking a SCAN of the baby’s chest, which they converted into a highly detailed, three-dimensional map of his airways. From this model, they designed and printed a SPLINT—a small tube, made of the same material that goes into SUTURES—that would fit SNUGLY over the weakened section of airway and hold it open.

(P7) The splint would last for three years or so, long enough for the boy’s cells to grow over it, and then would DISSOLVE. Three weeks after the splint was IMPLANTED, the baby was disconnected from the ventilator and sent home. In May of 2013, in The New England Journal of Medicine, the researchers reported that the boy was thriving and that “no UNFORESEEN PROBLEMS related to the splint have arisen.”

(P8) This sort of procedure is becoming more and more common among doctors and medical RESEARCHERS. Surgeons are implanting all types of BODY PARTS. The supporters of 3-D printing claim that the technology allowing us to print things that are more personal and intimate. This appears to be even more true in medicine: increasingly, what we are printing is ourselves.

“…the researchers reported that the boy was thriving and that no UNFORESEEN PROBLEMS related to the splint have arisen.” (P7)

What does “as its name suggests”, “body pts” and “unforeseen problems” mean? Practice using each expression in a sentence; extra points if you can use it in conversation.

Technology, Weekly_ArticleApril 22, 2015
[Technology★★★] MARK ZUCKERBERG’S INTERNET.ORG HAS A FEW MAJOR FLAWS (P1) Not everyone is a fan of Internet.org, FACEBOOK‘s non-profit aiming to bring internet access to “THE MOST DISADVANTAGED” parts of the world. (P2) Since its February ROLLOUT in India, several …
END_OF_DOCUMENT_TOKEN_TO_BE_REPLACED 1

Weekly_ArticleJuly 2, 2015
[WORLD NEWS ★] FLOODS HIT RUSSIA’S OLYMPIC CITY OF SOCHI (P1) FLASH FLOODS brought the Black Sea resort of Sochi to a STANDSTILL on Thursday and APPARENTLY killed at least one person as it HALTED trains and left cars half-SUBMERGED in …
END_OF_DOCUMENT_TOKEN_TO_BE_REPLACED 1

Philippines to split from the USA

Weekly_ArticleOctober 31, 2016
[World News ★★] (P1) The Philippines president Rodrigo Duterte said his country will move away from the USA and work with China. Mr. Duterte might also get closer to Russia. He said: “Maybe I will talk to Putin and tell him …
END_OF_DOCUMENT_TOKEN_TO_BE_REPLACED 1