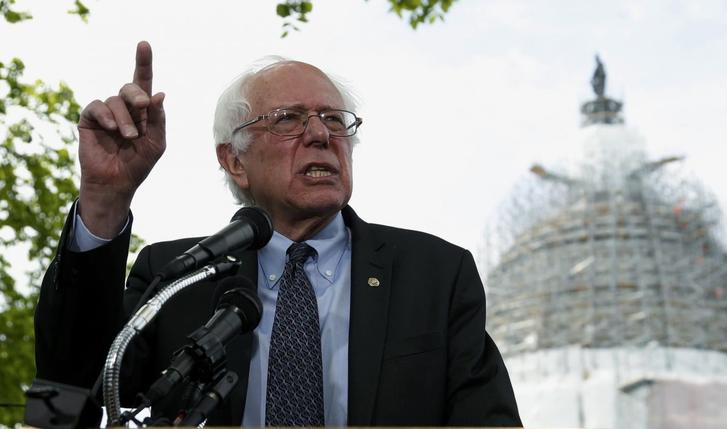 (P1) Independent U.S. Senator Bernie Sanders of Vermont on Thursday announced he would seek the 2016 Democratic nomination for president in a bid likely to pressure Hillary Clinton from the left and challenge her on financial issues.

(P2) Sanders, a self-described socialist and one of the most outspoken liberals in Congress, faces a difficult fight against Clinton, the presumptive party frontrunner.

(P3) “The people at the top are grabbing all the new wealth and income for themselves, and the rest of America is being squeezed and left behind,” Sanders said in an email to supporters declaring his candidacy.

(P4) “The middle class in America is at a tipping point. It will not last another generation if we don’t boldly change course now,” he wrote.

(P5) Sanders, 73, is an ardent supporter of left-leaning policies such as expanding Social Security and raising the federal minimum wage. Now in his second Senate term and previously a member of the U.S. House of Representatives, he caucuses with Democrats even though he was elected as an independent.

(P6) He has cultivated a following among some American liberals for campaigns on income inequality and social issues.

(P7) In 2010, Sanders stood on the Senate floor for more than eight hours lecturing about corporate greed and criticizing Wall Street as he sought to delay a tax bill that would extend cuts initially enacted by former President George W. Bush.

(P8) He will likely struggle to compete against the fundraising might and name recognition of Clinton, a former U.S. secretary of state and first lady. But after running for office and losing numerous times in the 1970s, Sanders has become known for doggedly fighting uphill battles.

(P9) Sanders could be embraced by activists as a substitute for U.S. Senator Elizabeth Warren of Massachusetts, a darling of the left who has said she is not running after liberals spent months urging her to get in the race.

(P10) Warren has made clear that she wants the party’s nominee to take progressive stances on battling Wall Street and bolstering the middle class.

(P11) Sanders may be able to use his entry into the primaries to nudge Clinton to take more liberal positions than she might have otherwise.

(P12) Clinton is under similar pressure from former Maryland Governor Martin O’Malley. He has not yet said whether he will run, but he has staked out liberal stances on issues such as free trade agreements being negotiated by the White House.

IS THE IDEA OF “PAYING YOUR DUES” OUTDATED?

Business, Weekly_ArticleMay 14, 2015
[BUSINESS★★★] IS THE IDEA OF “PAYING YOUR DUES” OUTDATED? (P1) According to a 2014 study by Bentley University, 70% of older Americans believe that Millennials are not as willing to PAY THEIR DUES—and 74% believe these young workers don’t have as strong a …
END_OF_DOCUMENT_TOKEN_TO_BE_REPLACED 1

MEXICO SUPREME COURT THROWS OUT BAN ON MARIJUANA USE

Weekly_ArticleNovember 15, 2015
[WORLD NEWS ★★] MEXICO SUPREME COURT THROWS OUT BAN ON MARIJUANA USE (P1) Mexico’s Supreme Court has ruled that sections of the country’s health law are INVALID, therefore legalizing the growing, possession, and use of marijuana for RECREATIONAL purposes. (P2) ACTIVISTS …
END_OF_DOCUMENT_TOKEN_TO_BE_REPLACED 1

ARE THESE SAND SCULPTURES TOO SEXY?

Weekly_ArticleDecember 13, 2015
[CULTURE AND ENTERTAINMENT ★★] ARE THESE SAND SCULPTURES TOO SEXY? (P1) Sand SCULPTURES of CURVACEOUS, full-bottomed women on Copacabana beach may be one of Rio de Janeiro’s WACKIER TOURIST ATTRACTIONS, but now they’re UNDER FIRE from a resident’s association claiming the …
END_OF_DOCUMENT_TOKEN_TO_BE_REPLACED 1

Technology, Weekly_ArticleSeptember 27, 2015
[TECHNOLOGY ★★] THE WORLD’S POOR HAVE NO INTERNET (P1) Efforts to increase Internet access worldwide are falling short of goals, according to a United Nations Broadband Commission report released earlier this week. (P2) More than half the world’s population is still offline, according …
END_OF_DOCUMENT_TOKEN_TO_BE_REPLACED