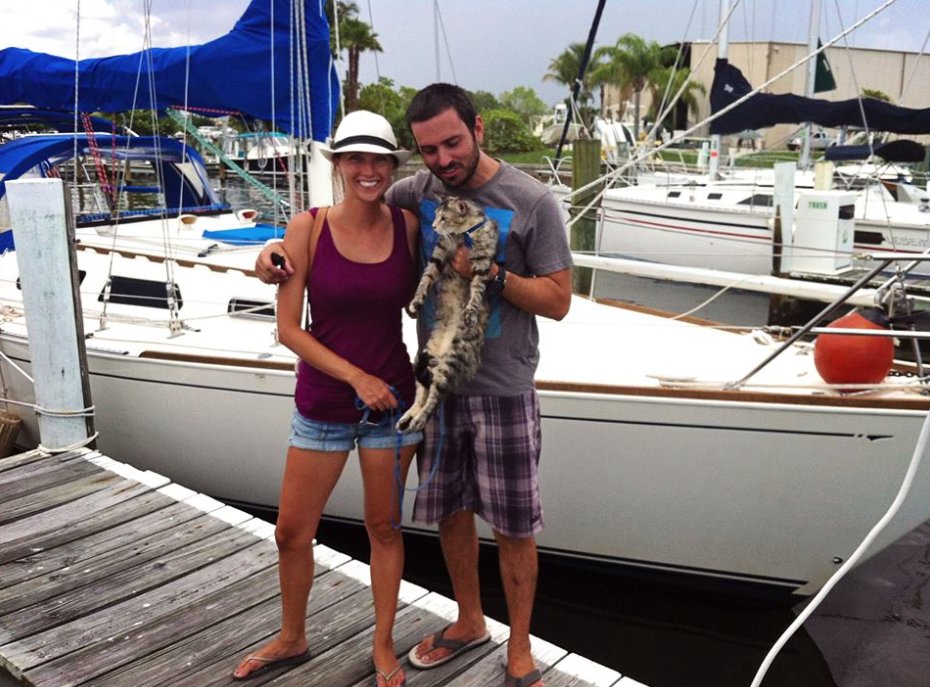 (P1) It takes GUTS to sell everything you own and begin sailing around the world.

(P2) But that’s exactly what Matt and Jessica Johnson did when they realized they were spending too much time in front of the TV.

(P3) Instead of taking up yoga or JOGGING, the change they OPTED for was RADICAL. They sold their house, learned to sail, and began an EPIC adventure at sea.

(P4) Their blog DOCUMENTS every step of their journey.

(P5) Before beginning their adventure, neither Matt nor Jessica had ever SET FOOT on a sailboat.

(P6) Matt was a successful sales manager at a car dealership and Jessica was a billing specialist for an auto INSURANCE company.

(P7) After spending three years learning how to sail, they sold their house and left everything they knew.

(P9) In 2012, the couple ADOPTED a cat named Georgie to join them on their travels. Matt, Jessica, and Georgie all seem to THRIVE on the MARINER lifestyle.

(P10) Georgie, “loves sitting on the deck and watching the fish over the side of the boat when we are at ANCHOR,” Jessica told the Daily Mail.

(P11) Georgie is attached to a leash for safety reasons unless the boat is anchored.

(P12) But this SEAFARING cat can swim! When the couple traveled to the Grand Cayman, Georgie jumped OVERBOARD, swam around the boat, and then climbed back on it.

(P13) As for spending all of their time together, Matt and Jessica “don’t mind at all. We have always liked to be around each other.”

(P14) Here’s the most amazing part — the traveling couple is still supporting itself from the savings they built when they sold their house, car and other belongings.

(P16) They document all of their expenses on their blog so that others who are thinking of exploring the world by sailboat will know how much it will cost.

(P17) This ADVENTUROUS couple hopes to continue on their journey for as long as they possibly can.

(P18) They’ve heard too many CAUTIONARY tales “from so many others that had been PUTTING THEIR DREAM ON HOLD until retirement.” The Johnson family is determined to explore the world while they are young.

Technology, Weekly_ArticleJuly 2, 2015
[TECHNOLOGY ★] GOOGLE ADDS AN “UNDO SEND” EMAIL FEATURE (P1) Google has ANNOUNCED a tool for Gmail users to RETRIEVE POTENTIALLY EMBARRASSING emails up to 30 seconds after they’ve been sent. (P2) The “Undo Send” tool will apply to all Gmail …
END_OF_DOCUMENT_TOKEN_TO_BE_REPLACED 1

What is the difference between “going to” and “will”?

Q&A, UncategorizedDecember 16, 2019
Oftentimes we will find ourselves in conversations where we may share our future plans or talk about the future, but which future tense do we use? To be fair, there is a slight difference but learning the difference and knowing …
END_OF_DOCUMENT_TOKEN_TO_BE_REPLACED

What is the difference between “meet,” “know,” and “see”?

Q&A, UncategorizedDecember 16, 2019
All 3 words are linked with people or places and are often confused or muddled up. “Meet” is used when we meet someone for the first time. So you in your first Cambly lesson you will meet with your tutor. “Know” is …
END_OF_DOCUMENT_TOKEN_TO_BE_REPLACED

Opinions, Weekly_ArticleJune 4, 2015
[OPINION★★★ ] WHY YOU’RE BETTER OFF GOING ALONE THAN NOT GOING AT ALL (P1) How many times have you wanted to see a BUZZED-ABOUT film or CHECK OUT a new restaurant or go to a concert, but you couldn’t find …
END_OF_DOCUMENT_TOKEN_TO_BE_REPLACED 1