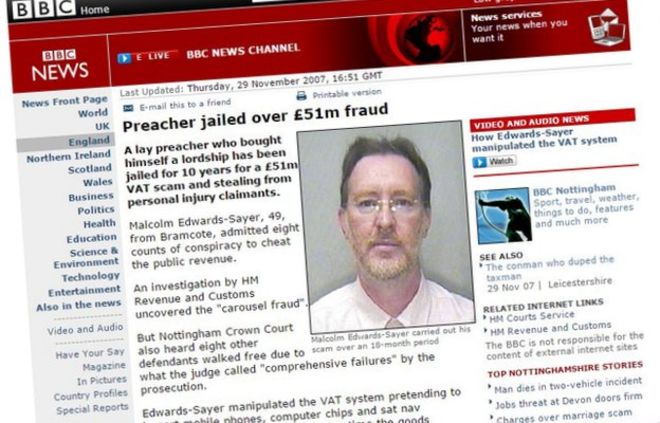 (P1) A man involved in a 50-million pound SCAM has lost a legal bid to have news stories about him removed from Google under the so-called “right to be forgotten”.

(P2) Malcolm Edwards originally applied for an INJUNCTION forcing five media organisations including the BBC to remove their articles about him.

(P3) He discontinued this claim, then applied for permission to serve PROCEEDINGS on Google instead.

(P4) The judge at Nottingham County Court DISMISSED the application.

(P5) In his judgment, His Honour Judge Nigel Godsmark said the applications were “totally without MERIT“.

(P6) He granted three of the defendants – the Nottingham Post, Derby Telegraph and Associated Newspapers – costs of £6,627.

(P8) Mr Edwards claimed the continued publication of the stories interfered with his right to privacy and his ability to lead a normal life.

(P10) He also relied on the judgment of a top EU court in a case last year involving Google and a Spanish man.

(P11) Since the Court of Justice of the European Union ruling, individuals have had the right to request that search engines remove certain web pages from their search results when people search for certain terms.

(P12) Following the ruling, Google removed a large number of links from its search results and continues to do so.

(P13) However, media organisations including the BBC started publishing links to news stories that have been removed from Google’s search results.

(P14) In a witness statement for the Malcolm Edwards case, the BBC’s director of editorial policy and standards, David Jordan, said there was and remains “a very significant public interest” in the publication of the article complained about.

(P15) He said the BBC News online service REPLICATES a library newspaper ARCHIVE and it is “important to ensure that it is retained INTACT to maintain public confidence in the service and avoid any suggestion that the BBC is ERASING THE PAST or ALTERING history or is otherwise failing to act independently and IMPARTIALLY“.

(P16) Mr Edwards, previously called Malcolm Edwards-Sayer, was jailed for six and a half years in November 2007 after admitting eight counts of CONSPIRACY to cheat the UK taxation system.

(P17) He was sentenced to a further three and a half years in prison for other offences, and the judge decided the two sentences should run CONSECUTIVELY.

(P18) This means Mr Edwards is still serving his sentence, although he is thought to have been released from prison on licence.

(P19) The media organisations therefore argued that his offences could not be treated as historical, and it remained in the public interest for the articles to be published, particularly given the seriousness of the offences.

(P20) They objected to the stories being removed from Google searches for the same reasons.

(P21) News stories about the original case still show up when “Malcolm Edwards-Sayer” is typed into Google.

(P22) Google, which was not a defendant in the case, told the BBC it does not comment on whether individuals have requested search results about them to be removed.

(P23) However, when EVALUATING a request, Google considers whether or not there is public interest in the information remaining findable through its search engine.

(P24) This means it is unlikely that Google would remove the search results about Malcolm Edwards-Sayer.

Weekly_ArticleJuly 31, 2015
[WORLD NEWS ★] ZIMBABWE SEEKS CECIL THE LION’S KILLER (P1) The US dentist who killed a lion in Zimbabwe should be EXTRADITED to FACE CHARGES, Zimbabwe’s Environment Minister Oppah Muchinguri has said. (P2) Walter Palmer’s extradition was being SOUGHT so that …
END_OF_DOCUMENT_TOKEN_TO_BE_REPLACED 1

Weekly_ArticleSeptember 27, 2016
[World News ★] (P1) Red phone boxes are typical in Britain. They are a big tourist attraction. However, people do not use them anymore. They have mobile phones. There are fewer and fewer phone boxes. (P2) One company wants to change this. The company …
END_OF_DOCUMENT_TOKEN_TO_BE_REPLACED 1

77% OF PARENTS WOULD CONSIDER STUDY ABROAD FOR THEIR CHILDREN

Weekly_ArticleJuly 17, 2015
[EDUCATION ★] 77% OF PARENTS WOULD CONSIDER STUDY ABROAD FOR THEIR CHILDREN (P1) More than three-quarters of parents who took part in a WORLDWIDE SURVEY carried out by UK-based multinational banking and financial services company HSBC would consider sending their children abroad for …
END_OF_DOCUMENT_TOKEN_TO_BE_REPLACED 1

Economy, Weekly_ArticleJune 16, 2016
[Economy ★★] (P1) Swiss voters rejected a plan to introduce a guaranteed monthly income for all citizens. Almost 77 percent of voters said no. The idea was for a minimum salary of around $2,500 for those who have been a …
END_OF_DOCUMENT_TOKEN_TO_BE_REPLACED 1