WE MUST NEVER FORGET HIROSHIMA

WE MUST NEVER FORGET HIROSHIMA 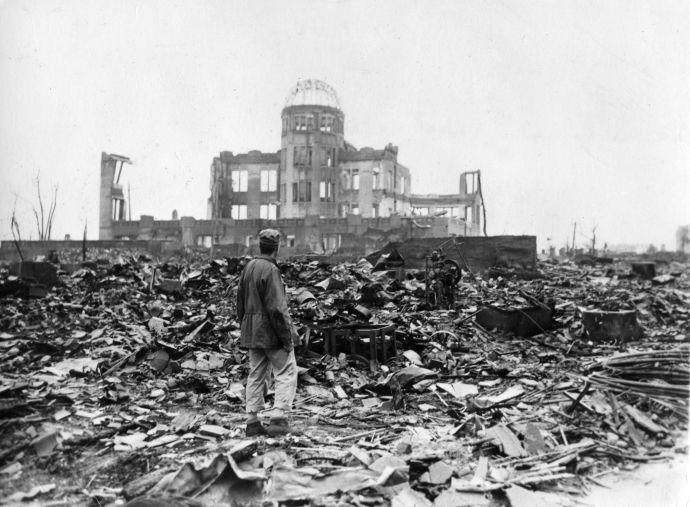 (P2) Seventy years later, one survivor’s message in particular is ETCHED into my thoughts. Indeed, it has become a personal CONVICTION of mine, as well: “Even though I would like to forget what happened to us, I must always remember the atomic bombing, to help ensure that the experience is never repeated.”

(P3) As we mark the 70th anniversary of the atomic bombings of Hiroshima and Nagasaki, it is VITAL that we learn from the past to help ensure a more peaceful future.

(P4) Japan has long been at the FOREFRONT of the global movement to eliminate nuclear weapons, a commitment that is as firm today as it has ever been. And while I know there is skepticism among many that the nuclear powers of the world will willingly disarm their nuclear ARSENALS, as Japan’s foreign minister, and as a native of Hiroshima, I truly believe that the goal of a world free of nuclear weapons is achievable and that we must pursue it.

(P5) Across the globe, there are now a total of about 16,000 warheads. While that may be a sharp reduction from the 70,000 at the peak of the Cold War, this is still far too high a number, and progress at eliminating them has also been much too slow.

(P6) It is true that the New START treaty, signed in 2011 between Russia and the United States, will further reduce these numbers. But the obligation to pursue nuclear disarmament does not rest solely on the two states with the largest arsenals; all other nuclear states should also take part in nuclear disarmament NEGOTIATIONS.

(P7) With that IN MIND, we urge those nations not yet engaged in nuclear disarmament efforts to reduce their arsenals with the eventual objective of their total elimination.

(P8) But if we want to eliminate nuclear weapons, an urgent priority must be to prevent greater RELIANCE on them. This means that cuts in the number of weapons should be accompanied by steps toward reducing their role and significance in security strategies and military DOCTRINE.

(P9) Unfortunately, some nations now seem to be placing greater emphasis on nuclear arsenals as part of their overall defense strategy — a clear STEP IN THE WRONG DIRECTION.

(P10) Most recently, I was extremely disappointed that the Review Conference of the Parties to the Treaty on the NON-PROLIFERATION of Nuclear Weapons (NPT) failed to reach a formal CONSENSUS. Despite this, there are many elements to the draft agreement that drew WIDESPREAD support and so must not be lost, including the need for full ACCOUNTABILITY and TRANSPARENCY for the world’s nuclear arsenals.

(P11) We cannot properly address the issue of nuclear disarmament without knowing the exact scope of the weapons IN QUESTION. Another benefit of greater transparency is that it will also help build public confidence that progress is being made on this issue. I therefore call for solid data from all nuclear weapon states.

(P12) Public support for change is vital, and with that in mind I encourage political leaders and young people from around the world to visit Hiroshima and Nagasaki to see firsthand the catastrophic humanitarian consequences of nuclear weapons. Such visits themselves, I believe, would act as a powerful force for nuclear disarmament.

(P13) Tied closely with the question of disarmament is the issue of nonproliferation, and here I would strongly urge North Korea to take CONCRETE steps to fulfill its commitment of abandoning all nuclear weapons and existing nuclear programs, something that has been repeatedly requested by the international community.

(P14) Japan has been, and will remain, a strong ADVOCATE for strengthening the SAFEGUARD system of the International Atomic Energy Agency, an INDISPENSABLE instrument for preventing any DIVERSION of nuclear materials to non-peaceful use. We also continue to promote STRINGENT export control in Asia and globally.

(P15) Of course, much of the world’s attention has been focused on the nuclear deal with Iran, an agreement that we welcome and hope will be steadily IMPLEMENTED.

(P16) Prime Minister Shinzo Abe and President Barack Obama said in April in their joint statement on nonproliferation: “In this 70th year since the atomic bombings of Hiroshima and Nagasaki, we are reminded of the catastrophic humanitarian consequences of nuclear weapons use. Hiroshima and Nagasaki will be forever engraved in the world’s memory.”

(P17) Their statement AFFIRMS that the LEGACY we must leave behind is a simple one: that Japan remains the first and the last place on Earth that has experienced the RAVAGES of an atomic bomb.

Entertainment, Weekly_ArticleOctober 5, 2016
[Entertainment ★★] (P1) India and Pakistan have bad relations. They have argued for many years over borders in Kashmir. The latest disagreement is about movies and actors. Pakistan’s biggest cinemas have banned Indian movies in Pakistan’s big cities. Cinema owners …
END_OF_DOCUMENT_TOKEN_TO_BE_REPLACED 1