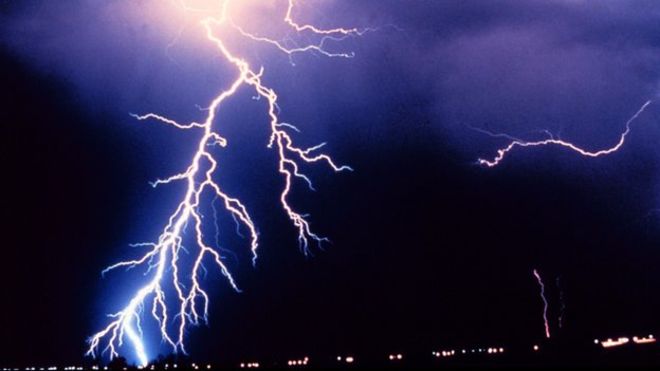 (P1) Google says data has been wiped from discs at one of its data centres in Belgium – after the local power grid was struck by LIGHTNING four times.

(P2) Some people have permanently lost access to the files on the affected disks as a result.

(P3) A number of disks damaged following the lightning strikes did, however, later became accessible.

(P5) Google has said that lightning did not actually strike the data centre itself, but the local POWER GRID, and the BBC understands that customers, through various backup technologies, were able to recover all lost data.

(P6) While four successive strikes might sound unlikely, lightning does not need to repeatedly strike the same place or the actual building to cause damage.

(P7) Justin Gale, project manager for the lightning protection service Orion, said lightning could strike power or telecommunications cables connected to a building at a distance and still cause DISRUPTIONS.

(P8) “The cabling alone can be struck anything up to a kilometre away, bring [the shock] back to the data centre and FUSE everything that’s in it,” he said.

(P9) The Google Compute Engine (GCE) service allows Google’s clients to store data and run virtual computers in the cloud. It’s not known which clients were affected, or what type of data was lost.

(P10) In an online statement, Google said that data on just 0.000001% of disk space was permanently affected.

(P11) “Although automatic AUXILIARY systems restored power quickly, and the storage systems are designed with battery backup, some recently written data was located on storage systems which were more susceptible to power failure from extended or repeated battery drain,” it said.

(P12) The company added it would continue to UPGRADE hardware and improve its response procedures to make future losses less likely.

(P13) A spokesman for data centre consultants Future-Tech, commented that while data centres were designed to WITHSTAND lightning strikes via a network of conductive LIGHTNING RODS, it was not impossible for strikes to get through.

(P14) “Everything in the data centre is connected one way or another,” said James Wilman, engineering sales director. “If you get four large strikes it wouldn’t surprise me that it has affected the facility.”

(P15) Although the chances of data being wiped by lightning strikes are incredibly low, users do have the option of being able to back things up locally as a SAFETY MEASURE.

“MY DEGREE IS NEXT TO WORTHLESS”

Weekly_ArticleAugust 23, 2015
[EDUCATION ★★] “MY DEGREE IS NEXT TO WORTHLESS” (P1) A majority of university graduates in the UK are getting jobs where they do not need a degree, according to a report. (P2) Here, three graduates who found themselves in that situation share …
END_OF_DOCUMENT_TOKEN_TO_BE_REPLACED 2

The World Has a New Lightning Capital

Science, Weekly_ArticleMay 19, 2016
[Science ★★★] (P1) Like watching lightning? Book your next vacation for Venezuela. NASA has determined that country’s Lake Maracaibo is the new lightning capital of the world. Using 16 years of data from the satellite-based Lightning Imaging Sensor (LIS), scientists determined Lake …
END_OF_DOCUMENT_TOKEN_TO_BE_REPLACED

How do I learn a foreign language if I’m too scared to talk to native speakers?

Language, Q&ADecember 3, 2019
Personally, I spent 7 years studying Spanish in high school and college, but I almost never spoke Spanish outside of class. I would stutter and clam up anytime I did happen to meet a native Spanish speaker. I would spend …
END_OF_DOCUMENT_TOKEN_TO_BE_REPLACED

Weekly_ArticleJune 19, 2015
[CULTURE AND ENTERTAINMENT ★★★] JUAN FELIPE HERRERA BECOMES FIRST MEXICAN-AMERICAN “POET LAUREATE” OF THE UNITED STATES (P1) As a child, Juan Felipe Herrera learned to love poetry by singing about the MEXICAN REVOLUTION with his mother, a MIGRANT farmworker in California. …
END_OF_DOCUMENT_TOKEN_TO_BE_REPLACED 1