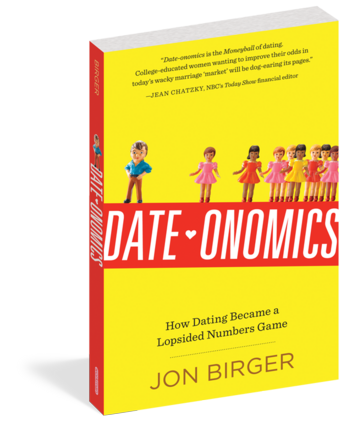 (P1) In his new book, Date-onomics: How Dating Became a LOPSIDED Numbers Game, author and former Fortune and Money columnist Jon Birger CRUNCHES SOME NUMBERS from the U.S. Census Bureau and other social surveys in order to SHED SOME LIGHT on dating challenges in America.

(P2) Aside from revealing a statistical “man SHORTAGE,” Birger explains how college-educated men and woman often limit their own dating OPTIONS, and (perhaps most surprisingly) says that the key to expanding your dating POOL could be as simple as a trip to your local SUBURBS.

(P4) Why are we focusing so much on college degrees?

(P5) “I definitely do not believe that college education makes someone a quality guy,” Birger says. In fact, “The RELUCTANCE to date across socioeconomic lines is a major reason why there is a ‘man DEFICIT‘ for college-educated women,” he explains. “There have been multiple studies showing that college-educated Americans are increasingly unlikely to marry someone lacking a college degree.” As a result of that, “My focus is on the college-educated dating market,” Birger says.

(P6) What, exactly, is the problem single women and men are having with dating right now?

(P7) The current hot topic seems to be our so-called hookup culture—a large amount of people preferring casual relationships to LASTING, committed ones. “I’m not trying to be the MORALITY police, and I’ll even go so far as to say that this isn’t entirely bad,” says Birger. But for women and men who do want to get married or have a committed relationship, it can be FRUSTRATING.

(P8) What do you suggest for those who want a committed relationship, but aren’t meeting partners with the same goals?

(P9) “Based on my research, I can say that women and men who are not meeting the right person should consider expanding their dating pool, either geographically or by education level/social class,” Birger says.

(P10) His suggestion? Spending more time in the suburbs: “Odd as it sounds, suburbs tend to have higher ratios of single men to single women than city centers, at least among college grads,” Birger says. So if you can’t seem to meet LIKE-MINDED individuals on dates in your city, a trip out to country for the day could change all that (or, at the very least, provide a little FRESH AIR).

Weekly_ArticleSeptember 5, 2015
[ENVIRONMENT ★★] THREE TRILLION TREES ON EARTH (P1) There are just over three trillion trees on Earth, according to a new study. (P2) The figure is eight times as big as the previous best ESTIMATE, which counted perhaps 400 billion at …
END_OF_DOCUMENT_TOKEN_TO_BE_REPLACED

Weekly_ArticleJanuary 18, 2016
Chapter 4-2: Gatsby’s Past Aim: In this 30-minute lesson, you will go over the part 4-2 of the book. Go over comprehension questions after each paragraph, and practice using new expressions. After saying hello, read the following part of the …
END_OF_DOCUMENT_TOKEN_TO_BE_REPLACED

Weekly_ArticleAugust 29, 2015
[CULTURE AND ENTERTAINMENT ★★★] ACTOR ED SKREIN IS THE NEW TRANSPORTER (P1) It can’t be easy taking over the key role in an internationally successful action FRANCHISE. Just ask George Lazenby (if you can find him). It helps if you have …
END_OF_DOCUMENT_TOKEN_TO_BE_REPLACED 1

HOW TO BECOME A FILM COMPOSER

Weekly_ArticleFebruary 7, 2016
[CULTURE AND ENTERTAINMENT ★★] HOW TO BECOME A FILM COMPOSER (P1) The music you hear as you are watching a favorite scene is a big part of the magic of movies. This is what Carlos José Alvarez does, and at 36, he’s …
END_OF_DOCUMENT_TOKEN_TO_BE_REPLACED 1