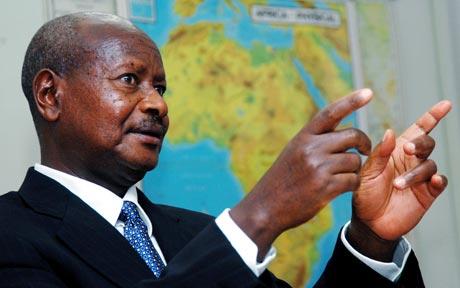 (P1) The government of Uganda used SOPHISTICATED SURVEILLANCE technology to target opposition members, journalists, and activists, according to an INVESTIGATION from the London-based WATCHDOG Privacy International. The report, based on secret government documents, shows how Ugandan President Yoweri Museveni personally SPEARHEADED a CAMPAIGN to spy on and VANQUISH OPPOSITION MOVEMENTS following the 2011 presidential election.

(P2) The government’s weapon OF CHOICE was a highly INVASIVE form of spyware called FinFisher, produced by Gamma Group International, a UK-based company with AFFILIATES in various other countries. FinFisher is capable of remotely monitoring computers, smartphones, and other equipment in real time, and has been sold ON THE OPEN MARKET to REPRESSIVE governments.

(P3) The Ugandan government purchased FinFisher in 2012, documents show, after Museveni launched Operation Fungua Macho (“open your eyes”). The INITIATIVE involved 70 INTELLIGENCE officials, and was launched in response to WIDESPREAD political UNREST that ERUPTED over ALLEGED corruption, police BRUTALITY, and high living costs following the 2011 election. More than 600 people were arrested or DETAINED, including members of PARLIAMENT.

(P4) FinFisher was the “BACKBONE” of the operation, Privacy International reports, which aimed to BLACKMAIL opposition members and “crush… CIVIL DISOBEDIENCE.” FinFisher “access points” were installed in Uganda’s parliament and other government institutions, and Museveni’s opponents were targeted in their homes, as well. Gamma trained four Ugandan officials on how to use FinFisher in late 2011, after a second wave of protests erupted.

(P5) “The documents say that the surveillance industry will sell to just about anyone,” Gus Hosein, executive director of Privacy International, tells the BBC. “And it is proof of the fact that we have been trying to raise all along — that these technologies are far too powerful to be in the hands of governments and that governments will go ahead and abuse them.”

(P6) There’s cause for concern GOING FORWARD, as well. According to Privacy International, Uganda is close to acquiring a centralized communications monitoring center ahead of next year’s presidential election.

(P7) In a letter to Privacy International, a government spokesperson denied that the surveillance program exists. “President Museveni does not use criminal blackmail as a political tool to win over or deal with opponents,” the spokesperson said, “it does not add any value as (the) government enjoys broad political LEGITIMACY and support.”

(P8) Government spokesman Colonel Shaban Bantariza tells the BBC that there is “no evidence” that any opponents have been monitored.

(P9) In a statement to the BBC, Gamma said its products are designed to combat “terrorist threats, drug cartels, other major organized crime, and PEDOPHILE rings.” “Gamma makes an absolute OBLIGATION of confidentiality to the governments which purchase its products and systems,” the company said. “Gamma does not assist or encourage any government agency in the misuse of Gamma’s products and systems.”

Life, Weekly_ArticleOctober 18, 2015
[LIFE ★] PEOPLE ARE DYING FOR SELFIES (P1) If 2014 was the year of the selfie, then 2015 took the art of self-photography to a new and dangerous level. (P2) People are, quite LITERALLY, dying to take a picture of themselves. …
END_OF_DOCUMENT_TOKEN_TO_BE_REPLACED 1

Business, Weekly_ArticleNovember 23, 2016
[Business ★★★] (P1) Tesla CEO Elon Musk says his company’s new solar roof will actually cost less for homeowners to install than a regular roof, Bloomberg reports. “So the basic proposition will be: Would you like a roof that looks better than …
END_OF_DOCUMENT_TOKEN_TO_BE_REPLACED 1

Weekly_ArticleOctober 31, 2016
[Sports ★★★] (P1) Curling is a popular ice sport in many northern countries. Although it is played all over the world and it is an Olympic sport, not many people really understand the rules. Actually, curling is a very simple and …
END_OF_DOCUMENT_TOKEN_TO_BE_REPLACED 1

People, Weekly_ArticleNovember 30, 2016
[People ★] (P1) This news is about a man. He is 54 years old. People say that he is a Spiderman. He climbs tall buildings. He climbs the Burj Khalifa and the Eiffel Tower. (P2) Now, he climbs a building in Barcelona. …
END_OF_DOCUMENT_TOKEN_TO_BE_REPLACED 1