WOMEN SHOULD BE SUBJECT TO THE MILITARY DRAFT

WOMEN SHOULD BE SUBJECT TO THE MILITARY DRAFT 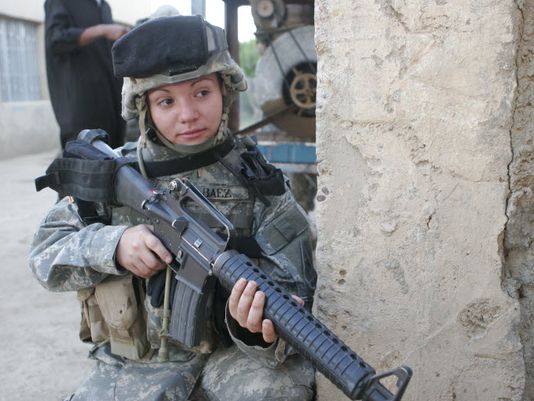 (P1) President Obama and I agree: Equality for women should mean equal SUBJECTION to DRAFT REGISTRATION.

(P3) I’m against a draft in general, despite ONGOING efforts by people like  Congressman Charles Rangel to bring it back. But if we’re going to have a draft, I don’t see why it shouldn’t apply to women, too. And I’m happy to see that President Obama agrees with me.

(P4) In the old days, a nation could lose a large CHUNK of its FIGHTING-AGE men and still BOUNCE BACK, so long as its FERTILE women remained.

(P5) But nowadays, women’s primary activity is no longer childbearing, and many women will never have kids at all. And even those who do have kids often delay childbearing until their late 20s or even 30s, long after any draft-induced military service would end.

(P6) There’s also the question of fairness. In the past, it maybe made sense to require men to PUT THEIR LIVES ON THE LINE for their nation. But we have equality, now. Women vote, are overrepresented among college graduates, live longer than men, and so on.

(P7) Meanwhile, to be CONSCRIPTED into the military is to be ripped from your home, friends and family, to see your life plans PUT ON HOLD, and to be subjected to a kind of harsh DISCIPLINE that civilians never encounter — while being placed at the risk of death. If men, who have historically been subjected to this, are to remain subject to it in the future, then why shouldn’t women?

(P8) In today’s modern society, I see no reason why men should be subjected to the draft, or to its PRECURSOR, registration, while women are not.

(P9) This puts me ON THE SAME PAGE as President Obama, who has backed draft registration for women. Here’s what Obama said in 2008: “I think that if women are registered for service, I think it will help to send a message to my two daughters that they’ve got OBLIGATIONS to this great country as well as boys do.”

(P10) I agree. Women should be just as subject to draft registration as men. That’s what equality means.

Weekly_ArticleOctober 18, 2015
[WORLD NEWS ★★] HONG KONG PHOTOGRAPHER TO FACE TRIAL IN THAILAND (P1) A Hong Kong photographer DETAINED in Thailand for carrying a BULLETPROOF jacket and HELMET will face trial after pleading NOT GUILTY on Monday to a weapons possession charge. (P2) The case …
END_OF_DOCUMENT_TOKEN_TO_BE_REPLACED 1

Culture, Weekly_ArticleDecember 8, 2016
[Culture ★★] (P1) Aviators flew vintage planes over Nairobi, Africa during the Vintage Air Rally, an event that recognizes biplanes from the 1920s and 1930s. People think that the oldest plane in the event is from 1928. (P2) In a race supporting charity, the aviators are …
END_OF_DOCUMENT_TOKEN_TO_BE_REPLACED

Weekly_ArticleNovember 23, 2015
Below is the prepared text of the Commencement address by Salman Khan ’98, MEng ‘98, founder of the Khan Academy, for MIT’s 146th Commencement held June 8, 2012.s. So coming here, I really feel like I have come to my …
END_OF_DOCUMENT_TOKEN_TO_BE_REPLACED