THE TRUTH ABOUT KIDS AND TECHNOLOGY

THE TRUTH ABOUT KIDS AND TECHNOLOGY 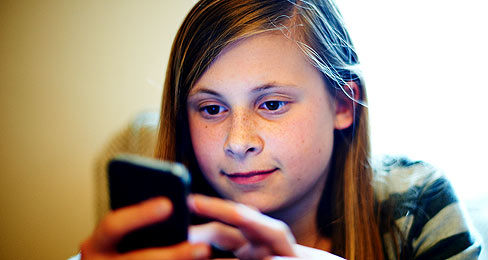 (P1) It should come as no surprise that kids are spending a lot of time in front of screens.

(P2) According to a new study, tweens from 8 to 12 years of age spend an average of four-and-a-half hours each day watching TV or using a digital device. For teens 13 to 18, the average is six-and-a-half hours. But those numbers hide a bigger, more complex picture.

(P3) Common Sense Media, a nonprofit group focused on helping children, parents and teachers better understand media and technology, conducted the study. It looked at a wide range of media-related activities, from old methods like reading and listening to the radio, to new favorites like using social media and video chatting. More than 2,600 kids from around the country were surveyed. Here are some truths—and some myths—that the study revealed:

(P4) Truth 1: Some teens spend too much time looking at screens.

(P5) One in five tweens uses more than six hours of screen media each day, and 18% of teens are looking at their screens for more than 10 hours a day. Often they’re doubling up on screens, watching television on one while chatting with friends on another.

(P7) While the average time young people spend reading, either in print or on a screen, is only 30 minutes per day, kids who took the survey say reading is one of their favorite activities.

(P9) Among tween boys, 71% enjoy playing video games, twice as many as tween girls. And while more than 25% of teen boys list playing video games as their favorite media activity, only 2% of teen girls do. Teen girls, meanwhile, spend about 40 minutes more each day on social media than boys do.

(P11) For tweens, TV is still the top media activity. They enjoy it the most and watch it every day. In fact, 47% of tweens have television sets in their bedrooms. For teens, while 57% have TV sets in their rooms, music is the REIGNING form of entertainment. However, only about a third listen to music on the radio. Most teens listen to it on their smartphones.

(P12) Truth 3: Gamers don’t get outside as much as kids who don’t play video games.

(P13) Kids report spending about an hour each day being active. For gamers, that average drops to 47 minutes, the lowest for any kind of media consumer. Social media users are the most active, spending one hour and 13 minutes per day doing some form of physical activity.

(P14) Myth 3: The Digital Revolution is making young people more creative than ever.

(P15) So far, kids are too busy consuming to be doing much producing. Tweens spend an average of five minutes and teens nine minutes per day making something with all their digital tools, whether it’s art, music, or writing.

(P16) In a statement, Common Sense Media chief executive officer James P. Steyer said that study “provides parents, educators and the media industry with an excellent OVERVIEW of what kids are doing today and how we can make the most of the media and technology in their lives.”

Life, Weekly_ArticleNovember 8, 2015
[LIFE ★] PETS IMPROVE CHILDREN’S HEALTH (P1) One in ten British parents say owning a pet has helped their child lose weight, while nearly half say their child is FITTER and healthier because they own a dog or a horse, according …
END_OF_DOCUMENT_TOKEN_TO_BE_REPLACED 1

Culture, Weekly_ArticleJune 9, 2016
[Culture ★] (P1) Indonesia is the 5th biggest producer of tobacco. Children younger than 15, must not work in Indonesia. It is illegal. (P2) However, around 1.5 children work in agriculture. Thousands work on tobacco plantations. (P3) Many have “green tobacco sickness”. …
END_OF_DOCUMENT_TOKEN_TO_BE_REPLACED

Business, Weekly_ArticleOctober 5, 2016
[Business ★] (P1) Elon Musk is the boss of SpaceX. SpaceX makes rockets. It wants to go to Mars. It wants to colonize Mars. It is working on a new rocket. (P2) Musk talks about the plan. SpaceX must make the …
END_OF_DOCUMENT_TOKEN_TO_BE_REPLACED 1

Weekly_ArticleAugust 23, 2016
[Sports and World News ★★★] (P1) A crowdfunding campaign has raised more than $40,000 (£30,000) to help Ethiopia’s Olympic marathon silver medalist, Feyisa Lilesa, seek asylum. He crossed his hands above his head as he finished the race. A gesture made by Ethiopia’s Oromo …
END_OF_DOCUMENT_TOKEN_TO_BE_REPLACED 1