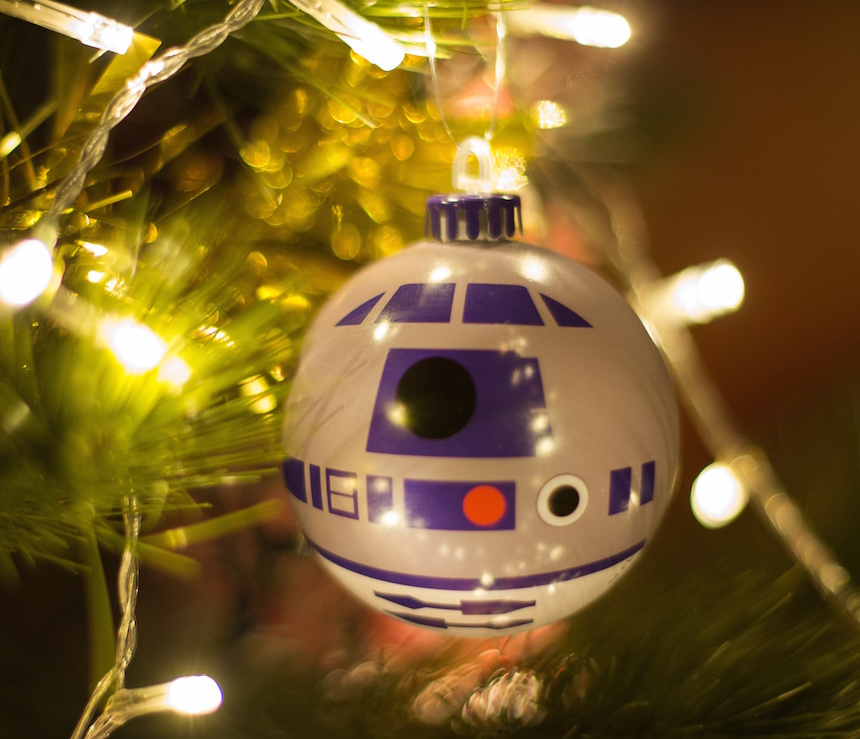 (P1) Star Wars fans are EAGERLY AWAITING the day of December 18th, when The Force Awakens will appear at movie theaters around the world, but what about on Christmas Day? How can the Force make its PRESENCE known while families are GATHERED around their Christmas tree? With new official Star Wars Christmas ORNAMENTS, that’s how. Four new sets have just been announced, each with six BAUBLES.

(P2) Three of the sets are based on the original Star Wars trilogy, and each ornament is designed as one of the many ICONIC characters. The art style used has a very MINIMALIST and CARTOONY look, but each character is still INSTANTLY RECOGNIZABLE.

(P3) First up is the A New Hope set, which has ornaments for R2-D2, C-3P0, Obi-Wan, Darth Vader, Luke Skywalker, and Princess Leia.

(P5) Next is the Return of the Jedi set, with Jabba the Hutt, Admiral Ackbar, Wicket, an Imperial Guard, Emperor Palpatine, and a Scout Trooper.

(P6) There’s also a bonus Imperial Death Star set with five Stormtrooper ornaments and one for the iconic Death Star itself.

(P7) The ornaments are all officially LICENSED from Disney, and each set is available now, priced at $31.99.

Weekly_ArticleNovember 29, 2015
[CULTURE AND ENTERTAINMENT ★★] BECOMING AN ARCHITECTURAL PHOTOGRAPHER (P1) We spoke with Rodrigo Dávila, an ARCHITECTURAL photographer based in Bogotá. When he was a teenager, Dávila INHERITED a camera from his grandfather and NEVER LOOKED BACK. After working as an architect for two years …
END_OF_DOCUMENT_TOKEN_TO_BE_REPLACED 1

★★★★, Weekly_ArticleJuly 21, 2016
[Travel ★★★★] 1) THE SKY MARSHALL NEEDS YOUR SEAT These guys still fly to protect you, and they’re sometimes seated without prior warning. If one of them shows up and needs your seat, you’ll either be bumped off the flight entirely …
END_OF_DOCUMENT_TOKEN_TO_BE_REPLACED 1

Microsoft Buying LinkedIn for $26B

Business, Weekly_ArticleJune 16, 2016
[Business ★★★] (P1) Microsoft has just announced one of the biggest deals in its history, per the Telegraph. The company says it will buy LinkedIn for $26.2 billion in cash, or $196 per share, a 50% improvement on its closing price …
END_OF_DOCUMENT_TOKEN_TO_BE_REPLACED 1