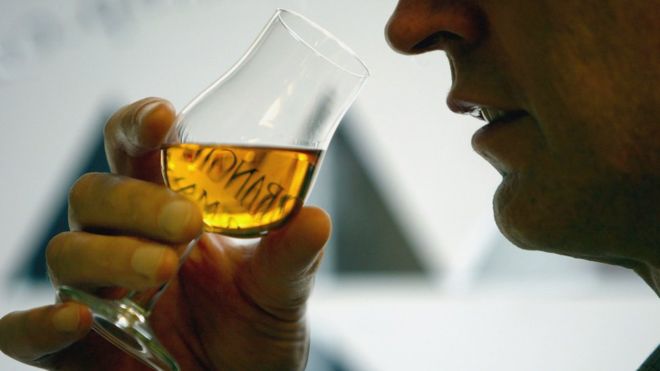 (P1) Considered by most AFICIONADOS to be the PINNACLE of the industry, SINGLE MALTS are WHISKIES made from a single DISTILLERY.

(P2) They typically command a PREMIUM PRICE over BLENDED WHISKIES.

(P5) “On more expensive whisky, you could be looking at 90% profit per bottle.”

(P6) Meanwhile the industry is continuing to boom – exports alone of single malt whiskies in the first half of 2015 totalled £406m, a rise of 5%, according to the Scotch Whisky Association.

(P7) But creating a new whisky business is not for the FAINT-HEARTED, or the cash-poor.

(P8) It requires millions of pounds in UPFRONT investment, but it can take three to ten years to have whisky ready for sale and to see any profit.

(P9) “There’s no point in even thinking about it unless you come up with at least £5m,” says Mr Swan. “And then you need money to keep you going until the whisky is ready.”

(P10) He estimates £250,000 per year is needed to keep a small distillery operating, and it is likely to be eight years before a whisky business BREAKS EVEN.

(P11) Despite this, the number of distilleries in Scotland, the world’s largest producer of single malt whisky, is growing. There are currently 117, up from 100 a couple of years ago, and 30 of these are small independents. 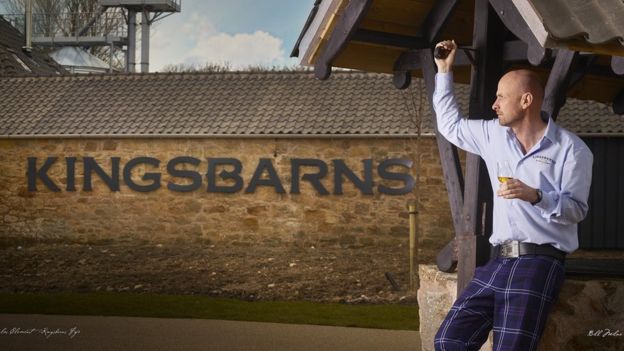 (P12) The time it takes to get your product to market can create major challenges, as 38-year-old Kingsbarns Distillery founder Douglas Clement found out.

(P13) He worked as a CADDY at St Andrews golf course for 20 years, and decided to start a whisky distillery after visiting golfers repeatedly expressed frustration at the lack of a nearby distillery. Mr Clement raised initial funds for Kingsbarns by approaching his golf clients, but was rejected by many VENTURE CAPITALISTS.

(P14) “Most investors want a profit in three to five years. The trouble with whisky is that they won’t see much money for about 10 years,” explains Mr Clement.

(P15) The TURNING POINT came in 2012 when he SECURED a £670,000 GRANT from the Scottish Government. That convinced one of the oldest distilling families in Scotland, the Wemysses, to invest £2.5 to £3m.

(P16) Mr Clement sold his interest to them, and he is now employed as the manager and is credited as the founding director, an arrangement he says he’s “extremely happy” with.

(P17) “This project for me personally was never about profit. It was about taking my idea for a whisky distillery and turning it into a reality,” he says.

(P18) It will be summer 2018 before the first release of Kingsbarns single malt whisky. In the meantime, they are finding other ways to make money, such as the income from their visitor centre, shop, and cafe.

WILL THE JAPANESE BOY BAND BREAK UP?

Weekly_ArticleJanuary 17, 2016
[CULTURE AND ENTERTAINMENT ★] WILL THE JAPANESE BOY BAND BREAK UP? (P1) Rumours are RIFE in Japan that one of the country’s most well-known and long-lived pop groups, SMAP, might be ON THE VERGE OF a BREAK-UP. (P2) Their TALENT AGENCY …
END_OF_DOCUMENT_TOKEN_TO_BE_REPLACED 1

Life, Weekly_ArticleJuly 18, 2015
[LIFE ★★] RICH AND AMERICAN? AUSTRALIA WANTS YOU (P1) FLUSH WITH the success of a millionaire visa program to ATTRACT wealthy Chinese, Australia is now promising citizenship to rich Americans who are WILLING to bring their cash and ENTREPRENEURIAL talent DOWN …
END_OF_DOCUMENT_TOKEN_TO_BE_REPLACED 1

What is your favorite place to visit on weekends?