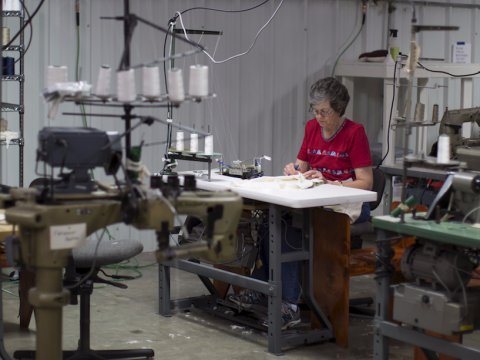 (P2) The Federal Reserve Bank of St. Louis recently published a study that showed that half of the LONG-TERM UNEMPLOYED in the United States are now women over 50. So what’s going on?

(P3) ECONOMICS reporter Paul Solman sat down with Teresa Ghilarducci, a labor economist, to talk about how AGE DISCRIMINATION and ASSUMPTIONS about the worth of women’s labor affect the job and RETIREMENT PROSPECTS of “older” women workers.

(P4) Paul Solman: What explains discrimination against older women in the workplace?

(P5) Teresa Ghilarducci: We all know about age discrimination, but thought it affected men and women equally. The fact that women are the ones that don’t get the jobs when they’re over 50 and looking for work does though, on second thought, make sense.

(P7) Ghilarducci: A lot of what women do in their lives is PUNCTUATED by time outside of the labor market — taking care of family and children — and women’s labor has always been DEVALUED. So if you have an older woman coming to you and applying for a job, you’re going to think about what kind of experiences she had, what kind of SKILLS she might have. You’re going to assume that she had some time out of the labor market and that she was doing something that was BASICALLY WORTHLESS, because she wasn’t being paid for it.

(P8) The fact that caring labor is devalued in our society is something that hits a woman really, really hard when she’s trying to get hired.

(P9) Solman: What’s going through the mind of the employer?

(P10) Ghilarducci: The employer is thinking, “Alright. I have a job applicant who doesn’t have the experience that I value.” That employer is also probably a man.

(P11) We all live, including this employer, in a PATRIARCHAL society, and the very definition of patriarchy is that women’s lives and skills are devalued.

(P12) We all know that women’s perceived economic value is less than men’s. Women are paid less in almost every job. But what’s surprising is that the chances of women getting a job after age 50 are a lot lower than men’s chances of getting a job.

(P13) Solman: But so many more women are in executive positions and have become employers, right?

(P14) Ghilarducci: So many more women are employers and are in executive positions, only because 2 or 3% is a lot more than zero. It is more than we used to have.

(P15) The studies that show that women are discriminated against in hiring mostly reflect how male employers act. I’m not so sure that female employers view women differently, though.

(P17) Ghilarducci: Well, if you look at our even basic measurement of economic value, our GROSS DOMESTIC PRODUCT, women’s labor, or caring labor, is not included at all if it’s not bought or sold. Even when caring labor is sold and bought, it’s usually bought by a nursing home or a child care center. And all of those places pay very, very little.

(P18) So the perceived value of “women’s work” is still very low.

(P19) Solman: The standard way to value a life STATISTICALLY is lifetime earnings.

(P20) Ghilarducci: Right. Look at women’s labor and how it’s valued in a WRONGFUL DEATH SUIT. If a male executive dies in an accident and that family sues, the chances are that the insurance company is going to pay out a lot more money than if a woman dies.

(P21) Most of the ways that we value lives are based on EARNING POWER.

(P24) Ghilarducci: Neither do I, nor do I think of a 50-year-old man as being old. But it turns out the labor market views people in their mid-40s as old. The Federal Reserve study has shown that WAGES stop increasing at about the age of 45. And so, from 45 to 55, wages decrease by 9%. From 55 to 65, another 9%. The age of peak earnings is a lot younger than we ever thought. If you don’t get a RAISE at your current job at around age 45, you probably will never get a raise.

(P26) That’s one of the reasons why RECESSIONS are so hard on older people. You lose your job THROUGH NO FAULT OF YOUR OWN, based purely on general economic conditions, but when you go back into the labor market, you’re facing a 25% wage decrease.

(P27) The United States leads developed nations in the production of low wage jobs. About 25% of our jobs pay $20,000 dollars a year or less. We are really, really good at creating jobs that barely make the POVERTY LEVEL for a family.

JAPAN HAS ITS FIRST SUMO CHAMPION IN A DECADE

Weekly_ArticleJanuary 31, 2016
[SPORTS ★★] JAPAN HAS ITS FIRST SUMO CHAMPION IN A DECADE (P1) Japan’s long wait for a SUMO CHAMPION has ended after Kotoshogiku became the first Japan-born wrestler in a decade to win a TOURNAMENT. (P2) The 31-year-old claimed the Emperor’s Cup …
END_OF_DOCUMENT_TOKEN_TO_BE_REPLACED 1

Entertainment, Weekly_ArticleMay 7, 2016
[Entertainment ★★★] (P1) Elephants will perform for the last time at the Ringling Bros. and Barnum & Bailey Circus on Sunday, as the show closes its own chapter on a controversial practice that has entertained audiences since circuses began in America two …
END_OF_DOCUMENT_TOKEN_TO_BE_REPLACED