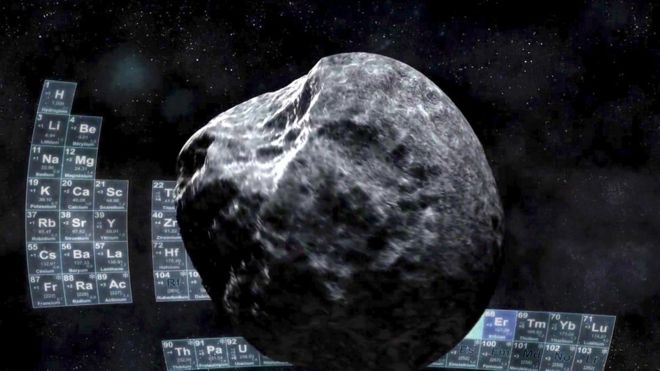 (P1) The government of the nation of Luxembourg has announced a plan to MINE ASTEROIDS in space.

(P2) It is going to support R&D in space mining technologies and may invest directly in some companies.

(P4) He told reporters that space mining was no longer science fiction in the pages of a JULES VERNE novel. The basic technologies – of landing and returning materials from asteroids – have been proven to work.

(P5) He urged European entrepreneurs to follow the example of American companies that had already begun to consider how they could EXPLOIT the expensive metals, rare elements, and other VALUABLE resources in space.

(P6) “Things are moving quickly in the United States, and IT IS HIGH TIME THAT there was an INITIATIVE in Europe. I am glad the first initiative is coming from Luxembourg,” he said. “It will give no excuse for European investors to go to California.”

(P7) Two notable American companies, Deep Space Industries and Planetary Resources, have begun assembling teams to design spacecraft systems that can explore asteroids and IDENTIFY minerals and metals that can be mined.

(P8) 13,500 asteroids have been discovered. Some may contain rare metals on their surfaces that are important to high technology but difficult to find on Earth, such as platinum, iridium, and palladium.

(P9) Although it is a small nation, Luxembourg has an important position in space activity.

(P10) It is the HEADQUARTERS of SES, the world’s largest commercial satellite telecommunications company. Intelsat, the second biggest company in that industry, also has offices in Luxembourg.

(P12) During the past decade, space missions run by international agencies have landed on asteroids and returned samples from them.

(P13) The next step would be to extract and return enough valuable minerals and metals to JUSTIFY the high cost of mining in space.

Weekly_ArticleFebruary 7, 2016
[ENVIRONMENT ★★] DEAL REACHED TO PRESERVE CANADA’S GREAT BEAR RAINFOREST (P1) The Canadian PROVINCE of British Columbia has announced a HISTORIC agreement that will protect the Great Bear RAINFOREST along its COASTLINE. The deal considers the interests of FIRST NATIONS, the …
END_OF_DOCUMENT_TOKEN_TO_BE_REPLACED 1

Weekly_ArticleNovember 7, 2015
[WORLD NEWS ★] POPE FRANCIS TO VISIT MEXICO IN FEBRUARY (P1) Pope Francis has announced that he will make his first official visit to Mexico early next year. (P2) The Vatican says the Pope’s eight-day trip will begin on 12 February. …
END_OF_DOCUMENT_TOKEN_TO_BE_REPLACED 1

Business, OrganizationsNovember 23, 2022
Unlike other anthropologists of the time, American anthropologist Edward T. Hall who was born in 1914, did not regard culture as a single and separate way of life but believed that the perspectives of individuals also affected interaction. This perspective …
END_OF_DOCUMENT_TOKEN_TO_BE_REPLACED

Can you ever start a sentence with “but”?

Q&A, UncategorizedJanuary 11, 2020
The short answer is no, you should not start a sentence with “but”. “But” is a coordinating conjunction that joins words, phrases, and clauses together: The phone rang but no one picked up.  It is grammatically incorrect to start a …
END_OF_DOCUMENT_TOKEN_TO_BE_REPLACED