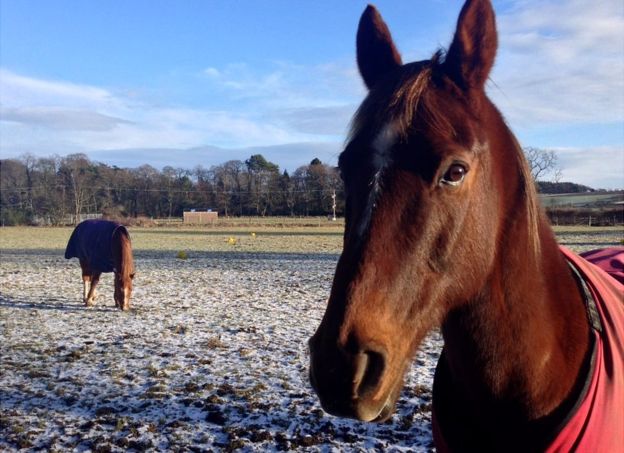 (P1) Horses are able to DISTINGUISH between happy and angry human facial EXPRESSIONS, according to research.

(P2) In an experiment using photographs of male human faces, scientists from the University of Sussex showed that domestic horses “responded negatively” to angry expressions.

(P3) The scientists say DOMESTICATION may have enabled horses to adapt to and interpret human behaviour.

(P4) The team carried out their tests at riding STABLES – presenting large photographs to a total of 28 horses.

(P5) “One person presents the photo while another holds the horse,” explained researcher Amy Smith.

(P6) “The main result,” she explained, “was that they looked [at angry faces] with their left eye.”

(P7) Mammal brains are wired such that INPUT from the left eye is processed by the right side of the brain.

(P8) “The right side of the brain is specialised for processing negative STIMULI,” explained Miss Smith. “It’s really about the PARTITION of energy – not using the whole brain.”

(P9) The researchers also fitted the horses with heart monitors, which revealed that angry faces caused their heart rates to rise significantly.

(P10) Similar results have been reported recently in domestic dogs, raising questions about how living with humans might have influenced animals’ abilities.

(P11) While horses might have an INNATE ability to recognise emotions in each other, their domestication by humans could have caused them to adapt that ability to humans.

(P12) “It also shows this extra ability of horses,” said Miss Smith. “[It shows that] our behaviour around them has an impact.”

(P13) Prof Debra Archer, an EQUINE VETERINARIAN at the University of Liverpool, said that anyone who was around regularly with horses would recognise that their behaviour had a “marked impact” on the animals.

(P14) “But it’s fascinating to see this tested scientifically; it’s an interesting insight into the relationship between horse and human.”

(P15) Gillian Higgins, another equine expert who runs the organisation Horses Inside Out, agreed.

(P16) “When I’m RELAXED, the horses will be relaxed. And if someone comes in who is stressed and nervous, they will PICK UP ON that,” she told BBC News.

Weekly_ArticleJanuary 21, 2016
Chapter 7-8: The Dead Dream Aim: In this 30-minute lesson, you will go over the part 7-8 of the book. Go over comprehension questions after each paragraph, and practice using new expressions. After saying hello, read the following part of …
END_OF_DOCUMENT_TOKEN_TO_BE_REPLACED

★★★★, Health, Weekly_ArticleDecember 15, 2016
[Health ★★★★] 1. Eat a Variety of Foods You need more than 40 different nutrients for good health and no single food can supply them all. Today’s food supply makes it easy to eat a wide variety of foods whether …
END_OF_DOCUMENT_TOKEN_TO_BE_REPLACED

Weekly_ArticleMay 14, 2015
[WORLD NEWS★★] SENATOR SANDERS ENTERS 2016 RACE IN CHALLENGE TO CLINTON (P1) Independent U.S. Senator Bernie Sanders of Vermont on Thursday announced he would seek the 2016 Democratic nomination for president in a bid likely to pressure Hillary Clinton from the …
END_OF_DOCUMENT_TOKEN_TO_BE_REPLACED 1