SHOPPING CENTERS IN VENEZUELA CUT HOURS IN HALF

SHOPPING CENTERS IN VENEZUELA CUT HOURS IN HALF 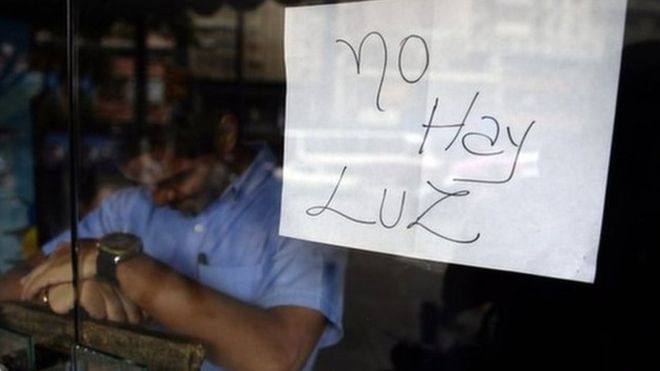 (P1) Shopping centers in the Venezuelan capital, Caracas, say they will be halving their open times to four hours a day.

(P2) The move will allow them to COMPLY WITH government energy RATIONING.

(P3) Ministers say that a DROUGHT has brought 18 of the country’s HYDRO-ELECTRIC DAMS to very low water levels. The SHORTAGE of electricity has caused many BLACKOUTS. (“No hay luz” in the photograph above means “There is no light” in Spanish.)

(P4) A spokesman for the country’s RETAIL association said the drop in working hours would have an impact on jobs.

(P5) The state energy corporation (Corpoelec) had wanted cuts twice a day, between 1pm and 3pm and then again between 7pm and 9pm.

(P6) The retail association, The Chamber of Venezuelan Commercial Centres (Cavececo), said it had made an ALTERNATIVE proposal: that shops should open late at 12:00 and close at 19:00 saving five hours of energy use daily.

(P7) But they had not received a response to this suggestion, the organisation said.

(P8) “To turn the lights off at one in the afternoon and not to be able to work would have a huge impact on our business,” said Mleidys Galves who works in a pizzeria in the Lider Shopping Centre in Caracas.

(P9) “That is our peak selling time when people come out to eat lunch.”

(P10) Cavececo said opening and closing twice in a day would be disastrous for banking operations, health centers, servicing companies, supermarkets, and restaurants.

(P11) The government has also asked private residences to start saving energy and has been rationing domestic water supplies since January.

Weekly_ArticleFebruary 14, 2016
[WORLD NEWS ★★] WILL THE NICARAGUA CANAL BE BUILT? (P1) Manuel Coronel Kautz isn’t a man who GIVES UP easily. This is a good thing. Because as head of Nicaragua’s CANAL Authority, he’s seen the $50 billion project suffer SETBACK after setback. …
END_OF_DOCUMENT_TOKEN_TO_BE_REPLACED 1

What is the correct response to the American phrase “Whats up?”

Q&A, UncategorizedDecember 3, 2019
The most typical answer to “What’s up” is “Not much, how about you?” and that’s it. If the other person actually does want to have a conversation at that moment, then they’ll continue on with a question or something they want to …
END_OF_DOCUMENT_TOKEN_TO_BE_REPLACED

How to take perfect pictures of your pet

★★★★, Technology, Weekly_ArticleJune 12, 2016
[Technology ★★★★] (P1) Holding the camera at eye level to take a picture is such a natural posture that you start to take it for granted. But if you take a shot of your pet from a normal standing position, …
END_OF_DOCUMENT_TOKEN_TO_BE_REPLACED 1