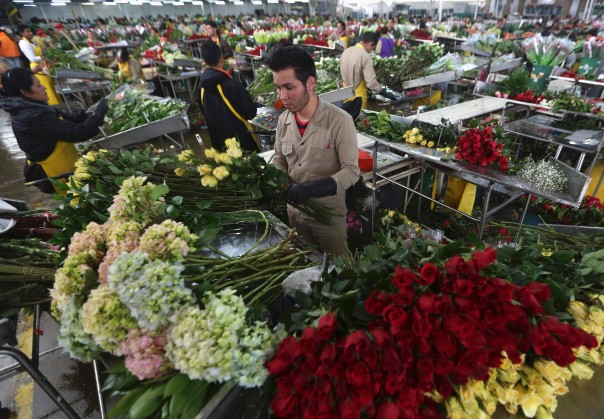 (P1) Colombian flowers flooded the world markets for VALENTINE’S DAY, the government here announced, saying that 500 million BLOOMS had been EXPORTED for the CELEBRATION.

(P3) According to figures compiled by the Trade, Industry and Tourism Ministry, of the 500 million flowers sent abroad for Valentine’s Day, 76 percent were headed to the United States.

(P4) The report adds that 80 percent of the flowers that Americans give come from Colombia.

(P5) Among the 90 nations buying Colombian flowers, other major markets for Valentine’s Day blooms include Russia, Japan, the United Kingdom and Holland, the ministry said.

(P6) Flowers are one of Colombia’s main export products, with $1.308 billion in sales last year.

(P9) Japan buys the most carnations, and chrysanthemums are big sellers in the United States, Britain and Chile.

(P10) The Agriculture Ministry says that Colombia has about 17,900 ACRES devoted to flower growing, and 130,000 people work in the flower industry, many of them females.

Weekly_ArticleFebruary 21, 2016
[WORLD NEWS ★★] CANADIAN ISLAND OFFERS REFUGE TO HATERS OF DONALD TRUMP (P1) If the idea of Donald Trump becoming the next U.S. president is your biggest fear, then fear no more, as a Canadian island is offering you SHELTER. (P2) …
END_OF_DOCUMENT_TOKEN_TO_BE_REPLACED 1

Technology, Weekly_ArticleJuly 6, 2016
[Technology ★★★] (P1) Snapchat is widely popular with the younger generation for sharing visual content. While the app allows users to share videos and pictures with friends, one feature that makes it different from other apps is that the messages disappear from …
END_OF_DOCUMENT_TOKEN_TO_BE_REPLACED

Science, Weekly_ArticleJuly 21, 2016
[Science ★★] (P1) Pluto is a dwarf planet at the end of the solar system, and an astronomer discovered it in 1930. (P2) However, Pluto remained a mystery for decades because it is 7.2 billion kilometers from the earth. That was, until last week when …
END_OF_DOCUMENT_TOKEN_TO_BE_REPLACED 1

Life, Weekly_ArticleMay 19, 2016
[Life ★★★] (P1) Road rage is aggressive behavior by drivers on the road.  It has become so common that some psychologists say it is a mental disorder. Many things can cause road rage. Some driving experts think road rage occurs because people watch chase scenes on TV. Others watch Formula One races and …
END_OF_DOCUMENT_TOKEN_TO_BE_REPLACED