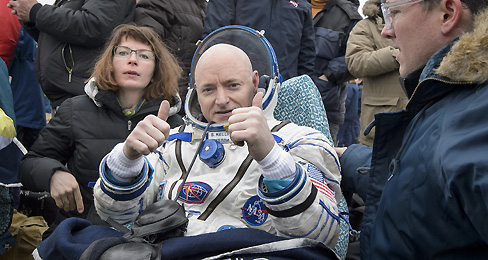 (P1) After 340 days in space, astronaut Scott Kelly’s historic MISSION has come to an end.

(P2) Kelly returned following a nearly yearlong stay aboard the International Space Station. It was the longest amount of time an American astronaut has spent in space at one time.

(P3) Kelly traveled back to Earth aboard a small Soyuz space capsule along with Mikhail Kornienko, his fellow Year in Space crew member. After landing in a REMOTE area of Kazakhstan, near Russia, Kelly smiled, pumped his fists, and gave a THUMBS-UP. “This feels great,” he said.

(P4) Kelly is scheduled to return today to his hometown of Houston, Texas. He will be REUNITED with this family, including his daughters, Charlotte and Samantha, as well as his twin brother, Mark Kelly.

(P5) During the course of the yearlong mission, Kelly and Kornienko traveled 144 millon miles through space, circled the Earth 5,440 times, and experienced more than 10,000 sunrises and sunsets.

(P6) Kelly was part of a crew that conducted more than 400 science experiments. He also participated in three spacewalks outside the ISS to repair the station, and was part of a team that experimented with growing lettuce in space.

(P7) Kelly was also the subject of many biomedical experiments to determine how human beings are able to withstand long periods of time in space. His brother, Mark, was tested on Earth using the same measures to help scientists compare the effects of space on the body and mind.

(P8) NASA will continue to study Kelly in the coming weeks and months to see how his body adjusts upon his return to Earth. This research is CRITICAL to help NASA as it prepares to send people to Mars in the future. A journey to Mars will require humans to stay in space for at least two years.

(P9) With his one-year mission, Kelly has “helped us take one giant leap toward putting humans on Mars,” NASA Administrator Charles Bolden said in a statement.

(P10) Kelly has spent more time in space, altogether, than any other American: 520 days over the course of four missions.

(P11) “Those of us who dream of sending astronauts to DEEP SPACE thank Kelly,” said Jim Green, director of planetary space for NASA, “and are thrilled to welcome him home.”

Weekly_ArticleMarch 6, 2016
[ENVIRONMENT ★★] PERU EXPERIENCES WORST WEATHER IN DECADES (P1) The heaviest rains and hottest TEMPERATURES in two decades have BATTERED Peru over the past week as weather linked to EL NINO caused FLOODING and LANDSLIDES that blocked the country’s central highway …
END_OF_DOCUMENT_TOKEN_TO_BE_REPLACED 1

Science, Weekly_ArticleJuly 6, 2016
[Science ★] (P1) Scientists study cow pee. The cow pee is from India. The scientists study it for 7 years. They have 500 samples of cow pee. Each sample is from a different cow. (P2) Every sample has gold in it. There are …
END_OF_DOCUMENT_TOKEN_TO_BE_REPLACED 1

Opinions, Weekly_ArticleAugust 29, 2015
[OPINION ★★] LISTEN, KIDS, NOT EVERYONE IS A WINNER (P1) My son never played T-BALL. And I absolutely refused to sign him up for the 6-and-under soccer and football leagues. All those kids running around like MANIACS DECKED OUT in the …
END_OF_DOCUMENT_TOKEN_TO_BE_REPLACED 1