IS THE OFFICE HIERARCHY DEAD?

IS THE OFFICE HIERARCHY DEAD? 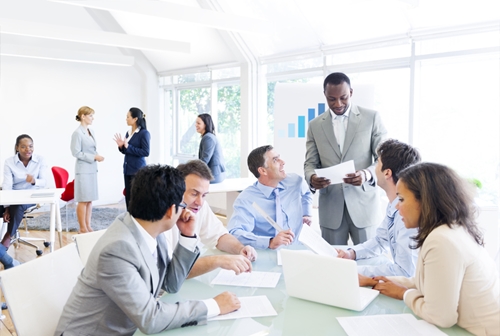 (P1) The TRADITIONAL office structure is CRUMBLING. Organizations are moving away from the TOP-DOWN HIERARCHIES. In the past, jobs were organized by function—sales people worked with sales people; marketing people with marketing—and success meant moving UP THE CORPORATE LADDER. The goal was always to have a more IMPRESSIVE JOB TITLE, a higher level of responsibility, and more power to tell people what to do.

(P2) But in a modern workplace, people have less-defined jobs and move from project to project. “We’re now operating businesses as networks of teams,” said Josh Bersin of the business consulting company Deloitte, which did a survey on this topic. Companies that haven’t already shift to the team-based structure are thinking seriously about it. 92 percent of the companies in the survey mention organizational redesign as a top PRIORITY.

(P3) Studies have found that an EMPHASIS on hierarchy and who has the higher job title leads to conflict in teams. “The traditional hierarchical structure doesn’t necessarily work in every company,” said Jeff Luttrell, director of talent acquisition at Alorica. “Companies that depend too much on hierarchy can’t innovate and adapt.”

(P4) So companies are creating more FLEXIBLE structures. What these look like depends on the organization.

(P5) While hierarchy may be HEADED TOWARD a less dominant role in business organization, the move to team-based work has often been difficult. The same Deloitte survey found that 74 percent of employees rated their work environment as too structurally complex. “Companies are struggling with it,” said Bersin. A common complaint among workers is having to report to many managers and team members instead of just one SUPERVISOR.

Weekly_ArticleDecember 8, 2016
[History ★★★] (P1) Orville and Wilbur Wright, commonly known as the Wright brothers, are the inventors of the airplane. On December 17, 1903, the two American brothers flew the first airplane. Their story is very interesting. (P2) The Wright brothers …
END_OF_DOCUMENT_TOKEN_TO_BE_REPLACED 1

Samsung Just Dropped $8B to Take You for a Drive