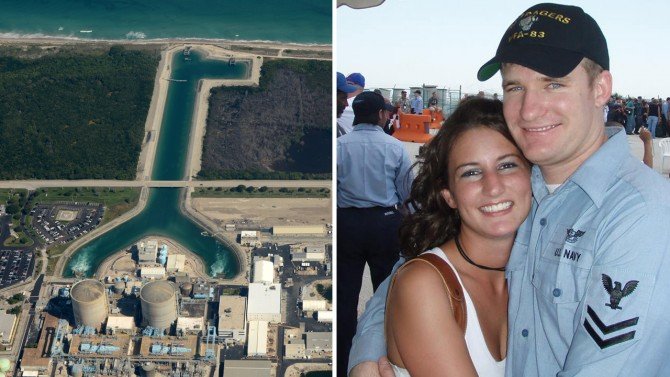 (P1) A South Florida SCUBA DIVER was taken on a TERRIFYING ride through a nuclear power plant’s INTAKE PIPE that he feared would end in his watery death.

(P2) What started as a trip with family and friends became what felt like a ride to hell for Christopher Le Cun last summer when the 30-year-old swam up to what he says was an improperly marked intake pipe to a nuclear plant in Port St. Lucie.

(P3) For some five minutes back in July, Le Cun was pulled along at seven feet per second through a PITCH BLACK pipe with no idea what lay at the other end.

(P4) They were five minutes Le Cun said will forever be IMPRINTED on his mind.

(P5) “We were looking for lobster when we came across a big structure,” Le Cun, a Navy VETERAN who’s been diving since age 12, said.

(P6) Le Cun and a friend put on their dive gear and left behind Le Cun’s wife, two children, and a friend’s child.

(P7) As they investigated what he said looked like “three underwater buildings,” Le Cun said the current began to speed up. He didn’t think anything of it, at first.

(P8) “Then suddenly I’ve lost control and I’m being sucked into the intake pipe,” he said.

(P10) Le Cun said he even considered DETACHING from his scuba equipment and ending his own life before he reached the end of the pipe.

(P11) “But then I though, I got a family. You’re gonna have to kill me.  I’m thinking about my wife, who was pregnant with our third child at the time,” he recalled.

(P12) Then Le Cun discovered he was in a RESERVOIR for sea water used to cool NUCLEAR REACTORS. A plant employee spotted him and couldn’t believe his eyes.

(P13) Le Cun borrowed a phone and called his wife. “I’m alive,” he told her, as she wept with her children and friends.

(P14) Le Cun’s friend Robert Blake had seen his friend get sucked into the intake pipe and was sure that he was dead.

(P15) Now Blake and Le Cun are arguing that there was no warning of the dangers at the intake pipe and that Florida Power and Light failed to properly mark the site.

(P16) Le Cun, who says he’s still TRAUMATIZED by the incident and isn’t comfortable scuba diving any more, is now suing the company.

(P18) “Nothing is more important safety at our St. Lucie Nuclear Power Plants, which is a reason that we have a protective cover over the intake piping. The diver intentionally swam into one of the intake pipes.”

(P19) Meanwhile, Le Cun says he has an entirely new OUTLOOK on life as he spends all the precious time he can with his wife and children.

Weekly_ArticleMarch 6, 2016
[SPORTS ★★★] GOLD MEDAL SKIER BILL JOHNSON DIES AT AGE 55 (P1) Bill Johnson, who has died aged 55, became the first male American SKIER to win Olympic gold in an ALPINE event; but his career, his family, and his life …
END_OF_DOCUMENT_TOKEN_TO_BE_REPLACED 1

Weekly_ArticleJune 29, 2016
[Animals ★] (P1) Richmond is in Virginia, USA. It is the state’s capital. (P2) The zoo in Richmond has two new animals. They are baby snow leopards. They are one month old. They do not have names. Their mother takes very good care of them. …
END_OF_DOCUMENT_TOKEN_TO_BE_REPLACED 1

19 of 31 Olympic Village Buildings Not Ready

Weekly_ArticleAugust 3, 2016
[Sports ★★★] (P1) Olympic authorities in Rio are scrambling to complete safety tests in the Olympic Village that should have been carried out a long time ago. It has been reported that 19 of the 31 apartment buildings have yet …
END_OF_DOCUMENT_TOKEN_TO_BE_REPLACED 1