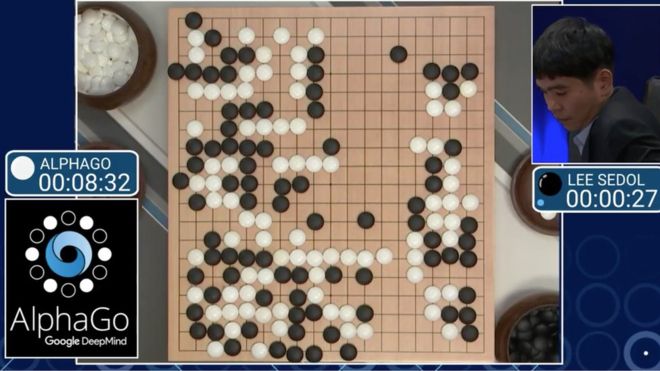 (P1) A computer program has beaten a master GO player 3-0 in a best-of-five competition, in what is seen as a LANDMARK moment for ARTIFICIAL INTELLIGENCE.

(P3) Mr Lee had been confident he would win before the competition started.

(P4) The Chinese BOARD GAME is considered to be a much more complex challenge for a computer than CHESS.

(P5) “AlphaGo played consistently from beginning to the end while Lee, as he is only human, showed some mental VULNERABILITY,” one of Lee’s former coaches, Kwon Kap-Yong, said.

(P7) Go, which was invented in China thousands of years ago, is a game of two players who take turns putting black or white stones on the points of a 19-by-19 grid. Players win by surrounding their opponent’s pieces with their own.

(P8) In the first game of the series, AlphaGo won by a very NARROW MARGIN – Mr Lee had led for most of the match.

(P9) After losing the second match to AlphaGo, Lee Se-dol said he was “speechless” adding that the AlphaGo machine played a “nearly perfect game”.

(P10) The two experts who provided COMMENTARY for the YouTube stream of for the third game said that it had been a COMPLICATED match to follow.

(P11) They said that Lee Se-dol had brought his “top game” but that AlphaGo had won “in great style”.

(P12) The AlphaGo machine was developed by British computer company DeepMind which was bought by Google in 2014.

(P13) It has built up its EXPERTISE by studying older games and learning PATTERNS of play.

(P14) “It has played millions and millions of times and each time got INCREMENTALLY better – the machine learns from its mistakes,” DeepMind chief executive Demis Hassabis said.

(P15) What does this win mean for artificial intelligence?

(P17) When IBM’s Deep Blue supercomputer beat world chess champion Garry Kasparov in 1997, the world was ASTONISHED. But Deep Blue was not the human-like intelligence that the founders of AI had hoped for. It won by searching through millions of moves in seconds.

(P18) Go became the HOLY GRAIL of AI gaming. Searching all possibilities won’t work because no search could be fast enough. There are more possible positions in Go than there are ATOMS in the universe, and a player usually has a choice of 200 moves.

(P19) To beat one of the world’s top players, AlphaGo uses a MIXTURE of CLEVER methods to make the search PARAMETERS much smaller.

(P20) Does all this mean that AI will soon take your job? Possibly you should be more worried about that.

PromptsMarch 11, 2016
Everyone loves giving and receiving gifts. It’s one of those things that is common across all cultures. So here is my gift to you, I hope you enjoy these conversation questions about gifts! Have you ever received a strange gift? …
END_OF_DOCUMENT_TOKEN_TO_BE_REPLACED

★★★, Weekly_ArticleJanuary 5, 2017
[Sports ★★★] (P1) Rwandan soccer officials have added a new rule to the game: no witchcraft. The move comes after a bizarre turn of events at a match between teams Mukura Victory and Rayon Sports on Dec. 16. After hitting …
END_OF_DOCUMENT_TOKEN_TO_BE_REPLACED 1

Do You Trust Your Friends?

Weekly_ArticleDecember 8, 2015
[VIDEO★★] Do You Trust Your Friends? Watch the following video before the lesson, and read the script out loud with the Cambly tutor during the lesson. 0:01    Hey! It’s Yessica. Would you sell out your friends to make a quick …
END_OF_DOCUMENT_TOKEN_TO_BE_REPLACED

Q&A, UncategorizedJanuary 9, 2020
Actually, both are correct! However, be careful with which one you use, as they mean different things! The prepositions “in” and “at” indicate whether you are referring to a location in time or in space. “In the beginning” is used …
END_OF_DOCUMENT_TOKEN_TO_BE_REPLACED 1