DEATH OF AN OIL MAN: THE FINAL DAYS OF AUBREY MCCLENDON

DEATH OF AN OIL MAN: THE FINAL DAYS OF AUBREY MCCLENDON 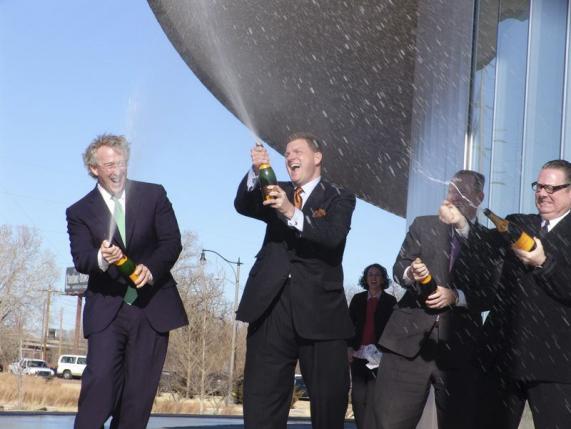 (P1) Aubrey McClendon (above, left) awoke that Tuesday, as he had 10,000 times before, ready to work on a business deal.

(P2) McClendon, co-founder of Chesapeake Energy Corporation, e-mailed a COLLEAGUE about a riverfront development in his HOMETOWN of Oklahoma City, the place where he had been active in business for so long.

(P3) The 56-year-old sounded UPBEAT, optimistic — he sounded like himself.

(P5) By now, the world knows the story. On the morning of March 2, hours after being accused of WHITE-COLLAR CRIMES related to oil- and gas-DRILLING rights, McClendon climbed into his SUV. He sped north along a lonely two-lane STRETCH of Midwest Boulevard, toward the edge of the city, where he drove his SUV into a wall at high speed.

(P6) The news REVERBERATED through Oklahoma City, where everyone in the business world knew McClendon.

(P7) A week on, with many still struggling to make sense of it all, the CIRCUMSTANCES surrounding McClendon’s death are only now coming into focus.

(P8) Emails that McClendon sent to business associates hours before held no clues, no hints of trouble.

(P9) “It is hard for us to understand that he is really gone,” Tom Blalock, an executive at American Energy Partners told the four thousand people gathered at a MEMORIAL SERVICE.

(P10) Yet, right to the end, McClendon seemed to be making plans.

(P11) His rise and fall were LEGENDARY. He built Chesapeake into a $37.5 billion company, thanks to his involvement in the FRACKING industry. But the gas boom he helped create caused prices to PLUMMET, cutting the company’s value by more than half, and leading to McClendon’s removal from the company.

(P12) He then formed American Energy Partners and raised more than $10 billion to buy drilling rights from the Appalachian Mountains to Australia and Argentina. But that business, too, would soon COLLAPSE because of falling energy prices.

(P13) Like everyone involved in the SHALE OIL industry, McClendon — COCKY, BOLD, INDEFATIGABLE — had been DEALING WITH the collapse in energy prices for months. But his world started looking worse in the week before the crash.

(P15) Within hours of the indictment, McClendon stated, “I will fight to prove my innocence and to clear my name.”

(P16) Around 8:00 a.m. the next morning, Wednesday, March 3, a business associate received a short e-mail from McClendon.

(P17) Not long after McClendon sent that message, he climbed into his SUV and drove off.

(P18) As he drove north along a two-lane country highway, he picked up speed, traveling well above the SPEED LIMIT of 50 miles per hour. His car COLLIDED with a CONCRETE wall at 9:12 A.M.

(P19) The police have yet to officially say whether the crash was an accident or a SUICIDE, but their early comments suggested that the businessman may have INTENTIONALLY crashed his car.

(P20) “He pretty much drove straight into the wall,” police officer Paco Balderrama said shortly after the crash.

Weekly_ArticleMarch 13, 2016
[ENVIRONMENT ★★] SLOVENIA WAITING FOR “BABY DRAGONS” (P1) Slovenia is COUNTING DOWN the days until the birth of a new GENERATION of “baby dragons.” (P2) Scientists in the Central European country have proudly announced that a female OLM — an AQUATIC …
END_OF_DOCUMENT_TOKEN_TO_BE_REPLACED 1

Weekly_ArticleAugust 10, 2016
[Sports ★★] (P1) A bank stopped looking at the world’s economy. It predicted how many medals countries would win at the Rio Olympics. There are no real surprises. Most people know the USA and China will win the most. The …
END_OF_DOCUMENT_TOKEN_TO_BE_REPLACED 1

TRAVEL WITH YOUR DOG

Life, Weekly_ArticleJanuary 10, 2016
[LIFE ★★] TRAVEL WITH YOUR DOG (P1) More people than ever are taking ROAD TRIPS and are bringing their dogs with them. While we are on the road, we want to keep our dogs safe, because they are members of the …
END_OF_DOCUMENT_TOKEN_TO_BE_REPLACED 1

PromptsFebruary 15, 2016
In today’s lesson, you will go over these questions. Use them as a guideline to your conversation, but you’re welcome to deviate if any other interesting topics come up.  What are you planning to do tomorrow? What about next week? …
END_OF_DOCUMENT_TOKEN_TO_BE_REPLACED