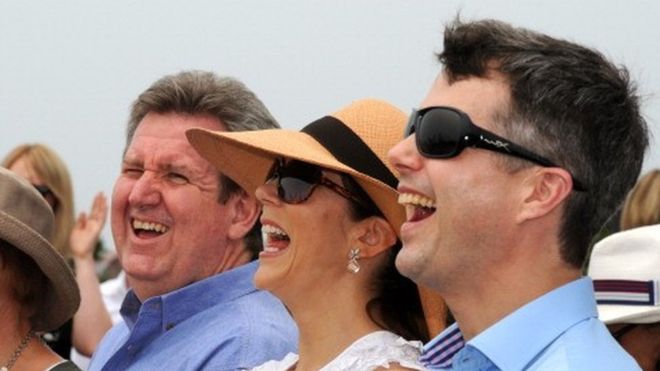 (P1) Denmark is the world’s happiest country, according to a report that urges nations to address INEQUALITY and protect the ENVIRONMENT.

(P2) The report, prepared by the SUSTAINABLE Development Solutions Network (SDSN) and the Earth Institute at Columbia University, showed Syria, Afghanistan, and eight sub-Saharan African countries as the 10 least happy places on earth to live.

(P6) “There is a very strong message for my country, the United States, which is very rich and has gotten a lot richer over the last 50 years, but has gotten no happier,” said Professor Jeffrey Sachs, head of the SDSN and special advisor to U.N. Secretary General Ban Ki-moon.

(P7) When the differences between countries where people are happy and those where they are not can be measured and analyzed, “we can understand the reasons and do something about them,” said Sachs.

(P8) “The message for the United States is clear. For a society that just chases money, we are chasing the wrong things. Our SOCIAL FABRIC is DETERIORATING, social trust is deteriorating, faith in government is deteriorating,” he said.

(P9) The report, now in its fourth edition, ranks 157 countries by happiness levels using factors such as per capita GROSS DOMESTIC PRODUCT (GDP) and healthy years of LIFE EXPECTANCY.

(P10) It also rates freedom from CORRUPTION in government and business.

(P11) “When countries pursue economic development to the NEGLECT of social and environmental objectives, the results can be ADVERSE for human WELL-BEING, even dangerous for survival,” it said.

(P12) “Many countries in recent years have achieved economic growth at the cost of sharply rising inequality, social exclusion, and grave damage to the natural environment.”

(P13) The first report was issued in 2012 to support a U.N. meeting on happiness and well-being. Five countries – Bhutan, Ecuador, Scotland, United Arab Emirates, and Venezuela – now have appointed Ministers of Happiness charged with PROMOTING happiness as a goal of public policy.

(P14) The 2016 survey showed that three countries in particular, Ireland, Iceland and Japan, were able to maintain their happiness levels despite difficulties, because of social support and SOLIDARITY.

(P15) Sachs pointed to Costa Rica, which came in 14th and ahead of many wealthier countries, as an example of a healthy, happy society although it is not an economic POWERHOUSE.

Weekly_ArticleJanuary 18, 2016
Chapter 3-7: Dishonesty in Women Aim: In this 30-minute lesson, you will go over the part 3-7 of the book. Go over comprehension questions after each paragraph, and practice using new expressions. After saying hello, read the following part of …
END_OF_DOCUMENT_TOKEN_TO_BE_REPLACED

MMA Fighter Dies After Getting Knocked Out

Weekly_ArticleApril 13, 2016
[Sports ★★★] (P1) A 28-year-old MMA fighter from Portugal died Monday night, 48 hours after he was knocked out during the third round of a fight in Dublin, the New York Daily News reports. According to the Washington Post, graphic video from the fight on …
END_OF_DOCUMENT_TOKEN_TO_BE_REPLACED 1

Weekly_ArticleJanuary 24, 2016
[SPORTS ★★] NATIONAL LEAGUE BASEBALL MAY ADOPT DESIGNATED HITTER (P1) If you love to watch Major League Baseball (MLB) pitchers bat, enjoy it while you can, because 2016 may be the final season it happens. (P2) At an MLB owners’ meeting …
END_OF_DOCUMENT_TOKEN_TO_BE_REPLACED 1