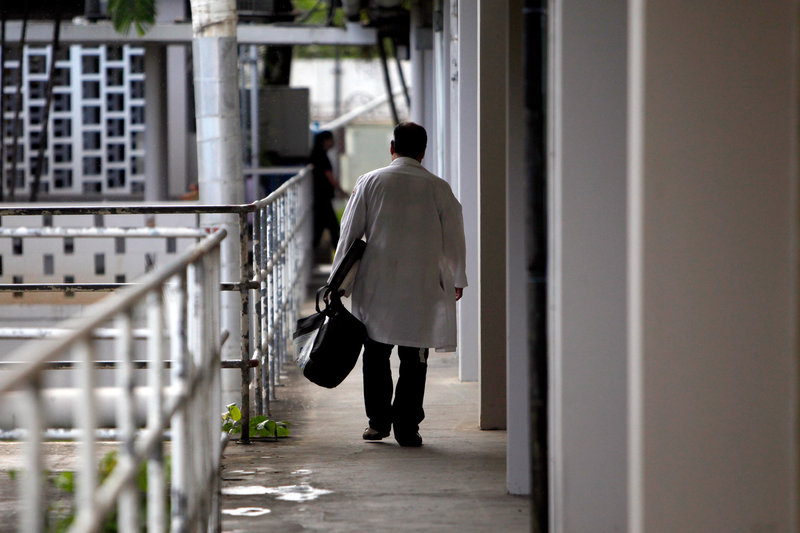 (P1) Puerto Rico is losing people. Due to a decade-long RECESSION, more than 50,000 residents leave the island each year—most for jobs and new lives in the MAINLAND U.S. This issue is affecting healthcare, where it’s ESTIMATED that at least one doctor leaves Puerto Rico every day.

(P2) The mass EXODUS of doctors is creating a CRISIS in patient care.

(P3) Dr. Antonio Peraza is among those doctors who recently left for the mainland. He specializes in INTERNAL MEDICINE and for nearly 14 years, had a private practice in Bayamon, Puerto Rico.

(P4) His decision to close his practice and take a job offer in Miami, Florida, was very difficult for him.

(P5) “I wish you could have seen my patients. My patients, the day I told them I was going to close my office, they cried,” Dr. Antonio Peraza says. “I felt like I was BETRAYING them.”

(P6) For decades, Puerto Rico has had a government-run healthcare system that provides COVERAGE for nearly everyone on the island. It offers generous BENEFITS, but has never been ADEQUATELY funded.

(P8) Faced with a declining income, Peraza decided to move to Florida and sell his office building and practice in Bayamon. But so far he says, he hasn’t found a doctor interested in buying him out.

(P9) “Because most of them are also leaving. You leave the island because there’s no other way, there’s no choice,” he says.

(P10) The U.S. Congress is working on a plan to help Puerto Rico, which is a COLONY of the United States, fix its economic problems.

(P11) Meantime, the exodus of doctors, nurses, and other healthcare professionals is making it hard for hospitals and clinics on the island to fill VACANT positions. Puerto Rico already had a SHORTAGE of specialists.

(P11) Domingo Cruz Vivaldi is vice-president of San Jorge Children’s Hospital in San Juan and he says, with so many doctors leaving, the situation is getting worse.

(P12) “To see a specialist, the waiting period can be four to five months. To replace the lost physicians, it takes a decade,” Cruz Vivaldi says.

(P13) The outlook is no better for young doctors just starting their careers. At the University of Puerto Rico, one of four medical schools on the island, Manuel Rodriguez is doing a residency in ORTHOPEDIC surgery. He says of his friends, only about one in five plan on staying in Puerto Rico to practice.

(P15) After his residency, Rodriguez says he’ll look for a job on the mainland.

(P17) “There’s a huge economic INCENTIVE to leave Puerto Rico, which is a sad, sad truth. But the thing is, we are a different group of people,” Lopez says. “The island has our home, our family, our language. So, I think there is a strong ATTACHMENT.”

(P18) Lopez says she hopes to come back to Puerto Rico after completing a fellowship on the mainland, but knows life might change her plans. Her brother left for a job in the states five years ago, she says. Today, he’s married, has two kids, and lives in Detroit.

Weekly_ArticleMarch 20, 2016
[ENVIRONMENT ★] LEOPARD HUNTING BANNED IN SOUTH AFRICA (P1) The South African government has imposed a ban on leopard hunts for the 2016 season. (P2) The decision was driven by science, not emotion. South African Environment Minister Edna Molewa is a …
END_OF_DOCUMENT_TOKEN_TO_BE_REPLACED 1

Business, Weekly_ArticleFebruary 21, 2016
[BUSINESS ★] COLOMBIA SENDS FLOWERS TO THE WORLD (P1) Colombian flowers flooded the world markets for VALENTINE’S DAY, the government here announced, saying that 500 million BLOOMS had been EXPORTED for the CELEBRATION. (P2) “With flowers grown by Colombian hands, the …
END_OF_DOCUMENT_TOKEN_TO_BE_REPLACED 1

Weekly_ArticleJanuary 18, 2016
Chapter 5-2: Gatsby Meets Daisy Aim: In this 30-minute lesson, you will go over the part 5-2 of the book. Go over comprehension questions after each paragraph, and practice using new expressions. After saying hello, read the following part of …
END_OF_DOCUMENT_TOKEN_TO_BE_REPLACED

Weekly_ArticleAugust 31, 2016
[World News ★★] (P1) North and South Korea are enemies. The situation between the two countries got worse after land mines wounded two South Korean soldiers along the border. (P2) South Korea said that North Korea put the land mines there, but …
END_OF_DOCUMENT_TOKEN_TO_BE_REPLACED 1