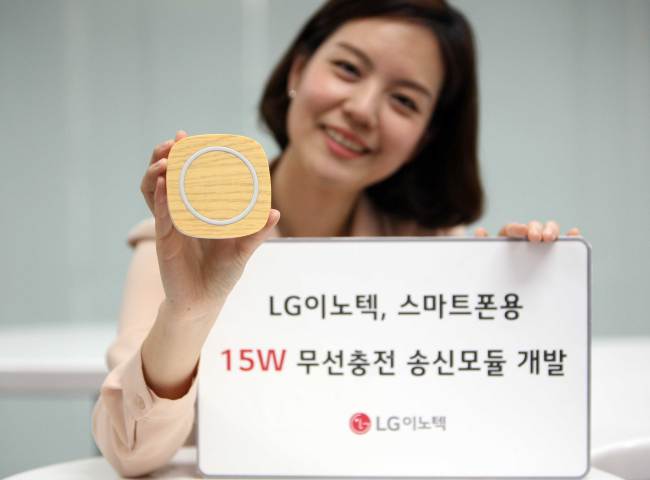 (P1) LG Innotek said Thursday it has developed a 15-watt wireless power charger that can supply electricity to devices as fast as a wired charger.

(P2) The new power transmission module can fill 50 percent of an empty battery within 30 minutes, which is three times faster than existing 5-watt wireless chargers, the company said. The new charger will be mass-produced starting this year.

(P3) LG Innotek said it expects the demand for wireless chargers to expand from homes and offices to automobiles and public places.

(P5) The company said it has upgraded not only charging speed but also compatibility and expandability of the device. The new wireless charger is compatible with diverse international standards including Wireless Power Consortium (WPC) 15W, Power Matters Alliance 5W and 9W power transmission modules, as it has been designed to meet the criteria set by the WPC and the AirFuel Alliance.

(P6) LG Innotek said the 15-watt wireless charger can be installed in automobiles because it has been developed under a strategic partnership with a major semiconductor manufacturer.

What do the following expressions mean?

Sports and Fitness, Weekly_ArticleApril 3, 2016
[Sport & Fitness ★] Cliff divers at Victoria Falls (P1) Two cliff divers jump into the Zambezi River. They jump from 30 meters. The river is a boundary between Zambia and Zimbabwe. It is near Victoria Falls. (P2) The men are professionals. They normally …
END_OF_DOCUMENT_TOKEN_TO_BE_REPLACED 1

Business, OrganizationsOctober 26, 2022
It is widely known that there is an internal stimulus, an urge that pushes people to do something. In its most understandable and simple form, this stimulus or urge is called “motivation”. If no such power had come from within …
END_OF_DOCUMENT_TOKEN_TO_BE_REPLACED

Weekly_ArticleOctober 11, 2016
[Sports ★★] (P1) This news is from Spain. An event is held there every two years. It is a sporting event. It is the Human Towers Competition. (P2) This year’s event is the 26th. The sport is a Spanish tradition. It is more than …
END_OF_DOCUMENT_TOKEN_TO_BE_REPLACED 1