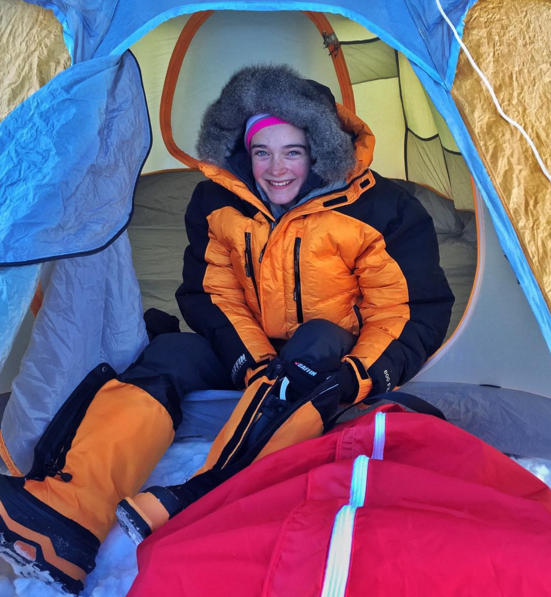 (P1) Jade Hameister might soon become the youngest person to travel to the ends of the Earth. The 14-year-old from Melbourne, Australia, is about to embark on a three-week trek to the North Pole that will see her skiing 140 miles across sea ice while pulling a sled that weighs as much as she does. Think that’s impressive? It’s only her first stop on a quest to complete the “polar hat trick”—crossings of the North Pole, South Pole, and Greenland, totaling 1,243 miles, reports Mashable. Jade plans to attempt the Greenland crossing in April 2017 and the South Pole later that year, and she’ll be accompanied by her dad, a polar guide, and a cinematographer who will document the adventure for National Geographic. The goal is to “inspire and empower young women around the world to be more active and chase their dreams,” says Jade, per the BBC.

(P2) She got the idea after meeting a woman at Everest Base Camp—Jade’s father has climbed Everest—who had crossed the South Pole alone. Training included a five-day camp in New Zealand, where she learned survival skills and how to ski. She’s also been doing CrossFit, dragging a sled around on the beach, and training in a special altitude facility. There are plenty of risks— hypothermia, polar bears, and falling through sea ice are just a few—but Jade says she’s ready. “She has always been very independent, driven, active, and passionate about health and fitness,” her dad tells the Herald Sun. “I have no doubt she can do this.” The group flies to Norway this week before starting the trek on Monday. (North Pole expeditions may soon be impossible.)

Discount for bringing own cup to Starbucks

Business, Weekly_ArticleApril 9, 2016
[Business News ★★] (P1) Starbucks U.K. will give customers a discount if they bring their own cup. It wants to cut down on trash and recycle more. Starbucks U.K. said: Reusable cups are a key part of our overall waste …
END_OF_DOCUMENT_TOKEN_TO_BE_REPLACED 1

TO SIRI, WITH LOVE

Thoughts, Weekly_ArticleNovember 11, 2014
This is a New York Times article on the sweet relationship an autistic kid develops with Siri. For some, Siri is just a machine-assistant. But – for Gus – she is a patient and polite friend. You can even talk to Siri …
END_OF_DOCUMENT_TOKEN_TO_BE_REPLACED

Weekly_ArticleMay 14, 2015
[WORLD NEWS★★] SENATOR SANDERS ENTERS 2016 RACE IN CHALLENGE TO CLINTON (P1) Independent U.S. Senator Bernie Sanders of Vermont on Thursday announced he would seek the 2016 Democratic nomination for president in a bid likely to pressure Hillary Clinton from the …
END_OF_DOCUMENT_TOKEN_TO_BE_REPLACED 1

Weekly_ArticleMarch 27, 2016
[TRAVEL ★] RIDE THE HELLO KITTY TRAIN (P1) A high-speed train painted in the colors of Hello Kitty made its first ROUND TRIP between the cities of Taipei and Taitung in Taiwan. (P2) About 200 fans of the Hello Kitty character …
END_OF_DOCUMENT_TOKEN_TO_BE_REPLACED 1