Sea Levels Set to Rise Much Faster Than Expected 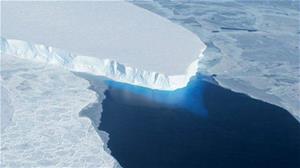 (P1) Warmer air, less-frigid water, and gravity may combine to make parts of Antarctica’s western ice sheet melt far faster than scientists had thought, raising sea levels much more than expected by the end of the century, according to a new study. New physics-based computer simulations forecast dramatic increases in melting in the vulnerable western edge of the continent, the AP reports. In a worst-case scenario, that could raise sea levels in 2100 by 18 to 34 inches more than an international panel of climate scientists predicted just three years ago. Even if the countries of the world control heat-trapping gasses at the moderate levels they pledged in Paris last year, it would still mean seas 3 to 12 inches higher than have been forecast, according to a study published Wednesday in the journal Nature.

(P2) By the year 2500, in the worst-case scenario, the simulations predict seas 42 feet higher—purely from Antarctic melt. “You’re remapping the way the planet looks from space with those numbers,” says study lead author Robert DeConto, a climate scientist at the University of Massachusetts. He warns that because of geological conditions, the East Coast could face sea level rises even higher than the global average. “North America has a lot to fear from ice loss from West Antarctica, which is where it all begins,” says DeConto, whose research looked at little-studied factors such as the effects of pooling water and the collapse of giant ice cliffs. (Another recent study found that the seas are rising at the fastest rate in at least 2,700 years.)

SOME ON WALL STREET SAY $1.2 TRILLION IN STUDENT DEBT COULD TRIGGER THE NEXT MARKET CRASH

Business, Weekly_ArticleMay 14, 2015
[BUSINESS★★] SOME ON WALL STREET SAY $1.2 TRILLION IN STUDENT DEBT COULD TRIGGER THE NEXT MARKET CRASH (P1) Famous HEDGE FUND manager Bill Ackman believes that there is a crisis in the student loan business and that this crisis could TANK THE …
END_OF_DOCUMENT_TOKEN_TO_BE_REPLACED 1

Business, Weekly_ArticleJune 29, 2016
[Business ★★] (P1) A slide has opened in downtown Los Angeles, but not in a children’s park. The new Skyslide is on the outside of an office tower, 300 meters above the street. It is made of glass just 3 cm …
END_OF_DOCUMENT_TOKEN_TO_BE_REPLACED 1