Coke Shakes Things Up in Face of Declining Sales 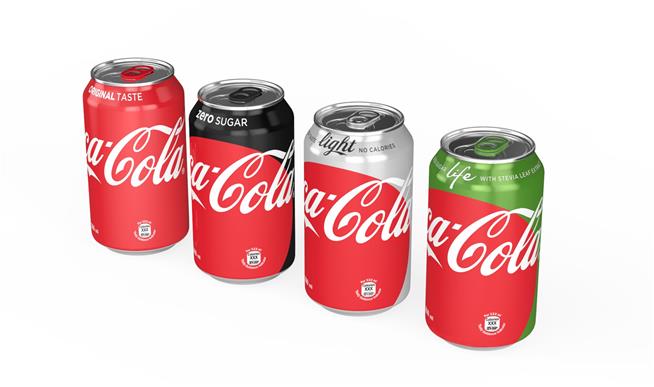 (P1) Diet Coke fans may soon be seeing red. That’s because, as BuzzFeed reports, Coca-Cola is redesigning its bottles and cans to make “Coca-Cola Red,” the color most associated with Original Coke, more prominent for Diet Coke, Coke Zero, and whatever Coke Life is. For example, the new Diet Coke can will feature a large red circle with only an accent of its traditional silver. According to the AP, the “One Brand” strategy has been tested in Chile, Russia, and Spain and will officially debut this May in Mexico with additional country rollouts through 2017. However, Coca-Cola is still gauging customer response to the redesign in the US.

(P2) In years past, Coca-Cola has separated its flavors as much as possible in order to not “dilute the brand,” Business Insider reports. But with soda sales dropping—especially in the case of Diet Coke—that’s no longer the case. “We’re extending the strong brand equity of Coca-Cola across the trademark to … better promote our great-tasting diet and light portfolio,” BuzzFeed quotes Coke’s CEO as saying. Coca-Cola executives also claimed the redesign would give customers “more choice” while “making it even easier for consumers to choose their Coca-Cola.” It’s unclear how either of those statements is true, but as long as they aren’t pulling a New Coke with the formula again, everything will probably be fine.

Jobs, Weekly_ArticleApril 16, 2016
[Jobs ★★] (P1) A record number of people applied to be a NASA astronaut. Over 18,300 people applied for 14 jobs. This is a record. NASA will now spend 18 months choosing the best people. It will announce the successful …
END_OF_DOCUMENT_TOKEN_TO_BE_REPLACED 1

Weekly_ArticleDecember 19, 2015
[EDUCATION ★] SHOULD HIGH SCHOOL CLASSES START LATER IN THE MORNING? (P1) More school districts around the U.S. are HEEDING the advice of scientists who say that expecting teens to show up to class before 8 a.m. isn’t good for their …
END_OF_DOCUMENT_TOKEN_TO_BE_REPLACED 1

Business, Weekly_ArticleMay 13, 2016
[Business ★★] (P1) The Russian gun maker Kalashnikov will move into fashion. Kalashnikov is one of Russia’s most famous companies. It makes the AK-47 rifle. The company said it has to make different things because Western countries stopped buying Russian …
END_OF_DOCUMENT_TOKEN_TO_BE_REPLACED