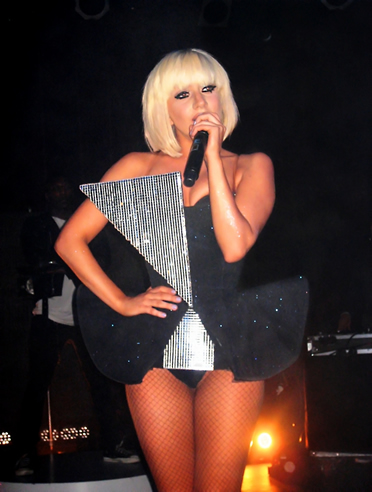 (P1) Lady Gaga dominates the social media world. The queen of pop has more followers on Facebook, Twitter, and YouTube than any other person in the world.

(P2) Even though she lost her number one spot on Facebook to Rihanna she is still the overall social media star. Lady Gaga has 41 million Facebook fans, almost 12 million Twitter followers and 1.6 billion YouTube views.

(P4) Lady Gaga’s social media success started a few years ago on MySpace, a social media platform that, at that time, was as popular as Facebook. In 2009, her team started concentrating on Facebook.

(P5) Today Lady Gaga’s social media success is based on a great team that supervises her fan pages and the star herself who tries to have as much contact with her fans as possible. She connects to her followers daily on Twitter, which she manages herself.

(P6) No other pop star in history has made so much success so quickly. One reason is that Lady Gaga, often compared to Madonna, is not scared to try something new.  Apart from creating games for mobile phones the staff  of the pop queen launched GagaVille , a virtual world with games, music, and many surprises.

Weekly_ArticleMay 7, 2016
[Sports ★★] (P1) Football fans in England are celebrating a fairytale win. Leicester City won England’s Premier League for the first time in their 132-year history. They beat many big teams to the title. It may be the greatest win …
END_OF_DOCUMENT_TOKEN_TO_BE_REPLACED

SEVEN REASONS NOT TO TAKE A JOB

Business, Weekly_ArticleJanuary 10, 2016
[BUSINESS ★] SEVEN REASONS NOT TO TAKE A JOB (P1) From time to time, all of us go looking for a new job. But there are certain WARNING SIGNS that should make you THINK TWICE before accepting a new position. Here are a …
END_OF_DOCUMENT_TOKEN_TO_BE_REPLACED 1

Weekly_ArticleJuly 31, 2015
[WORLD NEWS ★] ZIMBABWE SEEKS CECIL THE LION’S KILLER (P1) The US dentist who killed a lion in Zimbabwe should be EXTRADITED to FACE CHARGES, Zimbabwe’s Environment Minister Oppah Muchinguri has said. (P2) Walter Palmer’s extradition was being SOUGHT so that …
END_OF_DOCUMENT_TOKEN_TO_BE_REPLACED 1

Technology, Weekly_ArticleMay 13, 2016
[Technology ★★] (P1) Samsung, the world’s leading producer of smartphones, has started a music streaming service called Milk Music. At present, the service is only available for Samsung Galaxy smartphones in the USA. The service offers over 200 radio stations and a total of 13 …
END_OF_DOCUMENT_TOKEN_TO_BE_REPLACED 1