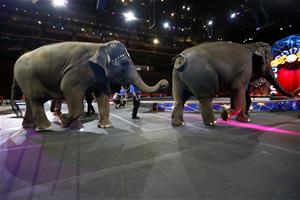 (P1) Elephants will perform for the last time at the Ringling Bros. and Barnum & Bailey Circus on Sunday, as the show closes its own chapter on a controversial practice that has entertained audiences since circuses began in America two centuries ago. Six Asian elephants will deliver their final performances in Providence, Rhode Island, and five will perform in Wilkes-Barre, Pennsylvania, during several shows on Sunday. The last Providence show will stream live on Facebook and at Ringling.com at 7:45 pm, reports the AP. Alana Feld, executive vice president of Feld Entertainment, which owns the circus, said the animals will live at its 200-acre Center for Elephant Conservation in Florida.

(P2) Elephants have been used in the circus in America for more than 200 years. In the early 1800s, Hackaliah Bailey added the elephant “Old Bet” to his circus. P.T. Barnum added the African elephant he named “Jumbo” to “The Greatest Show on Earth” in 1882. The Humane Society says more than a dozen circuses in the United States continue to use elephants. But none tour as widely or are as well-known as Ringling Bros. It’s also getting more difficult for circuses to tour with elephants. Dozens of cities have banned the use of bullhooks—used to train elephants—and some states are considering such legislation.

Scandinavian Countries Do the Most for Women

Life, Weekly_ArticleMay 7, 2016
[Life ★★★] (P1) According to recent studies, Scandinavian countries are doing more for women than any other country on Earth. In general, being a woman in northern Europe is better than elsewhere around the world.  In global rankings, Iceland leads the world in terms of gender equality. Sweden, Norway, …
END_OF_DOCUMENT_TOKEN_TO_BE_REPLACED

PromptsMarch 11, 2016
Everyone loves giving and receiving gifts. It’s one of those things that is common across all cultures. So here is my gift to you, I hope you enjoy these conversation questions about gifts! Have you ever received a strange gift? …
END_OF_DOCUMENT_TOKEN_TO_BE_REPLACED

Weekly_ArticleSeptember 21, 2016
[World News ★★★] (P1) The capital of Turkmenistan, a country largely closed to outsiders, has opened a $2.3 billion new international airport terminal in the shape of a flying falcon. The terminal, whose roof in profile resembles a bird with spread …
END_OF_DOCUMENT_TOKEN_TO_BE_REPLACED 1

Weekly_ArticleMay 13, 2016
[World News ★★★] (P1) When it comes to building skyscrapers, China has become the world’s leading country. The Communist nation’s leaders are urging city planners to expand to the sky.  By the end of next year, every third building over 150 meters will be standing in China. The Shanghai Tower, which …
END_OF_DOCUMENT_TOKEN_TO_BE_REPLACED 1