Scandinavian Countries Do the Most for Women 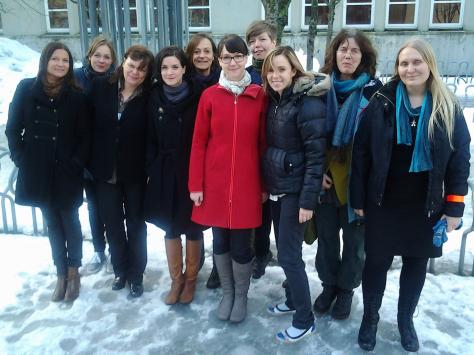 (P1) According to recent studies, Scandinavian countries are doing more for women than any other country on Earth. In general, being a woman in northern Europe is better than elsewhere around the world.  In global rankings, Iceland leads the world in terms of gender equality. Sweden, Norway, and Denmark come in next.

(P2) The United States has improved its ranking, moving up from 31st place to the 19th spot, largely because President Obama has offered women more jobs in government offices. At the bottom of the list are Yemen and Pakistan, where it is least desirable to be a woman.

(P3) In Scandinavia, equality starts at an early age. Boys and girls have the same educational opportunities. There are even more women enrolled in universities than men.

(P4) In the workforce, men and women are equally respected and they get the same pay. Especially in Sweden, the government makes it easier for women to return to work after having a baby. A complex welfare system allows them to balance work and family life. All these measures have led to rising birth rates in Scandinavian countries.

(P5) Scandinavian countries have a long history in gender equality. They were the first to give women the right to vote. This has led to more women taking an active role in politics. Today Sweden, for example, has the highest ratio of females in parliament – 44%.

Technology, Weekly_ArticleMay 7, 2016
[Technology ★★] (P1) Elon Musk has opened a kind of gym for robots, called OpenAI Gym. Mr. Musk is the boss of the companies Tesla Motors and SpaceX. He also founded the online payments website PayPal. OpenAI Gym is a …
END_OF_DOCUMENT_TOKEN_TO_BE_REPLACED

SAY HELLO TO THE “SEA BUNNY”

Weekly_ArticleJuly 31, 2015
[ENVIRONMENT ★★] SAY HELLO TO THE “SEA BUNNY” (P1) Say hello to this week’s Internet OVERLORD, the FLUFFY-looking “sea BUNNY.” (P2) The animal isn’t actually a tiny ocean-DWELLING rabbit. The creature ELICITING “awwws” around the world is a type of SEA …
END_OF_DOCUMENT_TOKEN_TO_BE_REPLACED 1

Weekly_ArticleSeptember 6, 2015
[WORLD NEWS ★] BRAVE CITIZENS HONORED (P1) Three Americans and one Briton who prevented an attack on a crowded train in France have been awarded that country’s highest honor for their BRAVERY. (P2) French president Francois Hollande presented each man with …
END_OF_DOCUMENT_TOKEN_TO_BE_REPLACED