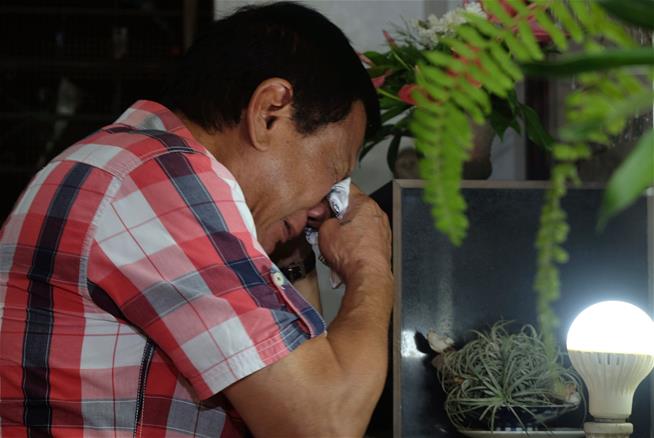 (P1) Rodrigo Duterte, the bombastic mayor of a major southern city, was heralded Tuesday as president-elect of the Philippines after an incendiary and populist campaign that projected him alternatively as an emancipator and a looming dictator, the AP reports. The 71-year-old, whose nicknames include “The Punisher” and “Asia’s Trump,” said he accepted the win with “great humility” after polls showed him with an overwhelming lead over his rivals, reports the BBC, which notes that while Duterte has promised a harsh crackdown on crime and a sweeping overhaul of the political system, it’s not clear what he plans to do to deliver on his promises—which include killing “100,000 criminals” and pardoning himself.

(P2) “Forget the laws on human rights. If I make it to the presidential palace, I will do just what I did as mayor,” Duterte said during his final campaign rally on Saturday. “You drug pushers, hold-up men, and do-nothings; you better go out. Because I’d kill you,” he said. “I’ll dump all of you into Manila Bay, and fatten all the fish there.” On foreign policy, he vowed that if South China Sea talks failed, he would sail to an artificial island newly created by China and plant the Philippine flag there. China, he said, could shoot him and turn him into a national hero. In the election for vice president, who’s separately elected in the Philippines, the son of late dictator Ferdinand Marcos is trailing by a hair to a political neophyte, Rep. Leni Robredo, who is backed by outgoing President Benigno Aquino III.

Technology, Weekly_ArticleMay 13, 2016
[Technology ★★] (P1) Samsung, the world’s leading producer of smartphones, has started a music streaming service called Milk Music. At present, the service is only available for Samsung Galaxy smartphones in the USA. The service offers over 200 radio stations and a total of 13 …
END_OF_DOCUMENT_TOKEN_TO_BE_REPLACED 1

Business, Weekly_ArticleNovember 4, 2014
Comment [Business ★] Almost 30% of employees fake an illness and skip work (P1) When your employees call in sick, there’s a good chance they aren’t really under the weather at all, new research finds. (P2) Nearly 30% of workers …
END_OF_DOCUMENT_TOKEN_TO_BE_REPLACED

Weekly_ArticleJuly 24, 2015
[CULTURE AND ENTERTAINMENT ★] YOUTUBE TO LAUNCH SITE DEDICATED TO GAMING (P1) YouTube is SEEKING to WIN OVER gamers. (P2) The online video giant announced plans AHEAD OF next week’s Electronic Entertainment Expo to launch a separate app and site specifically …
END_OF_DOCUMENT_TOKEN_TO_BE_REPLACED 1