Deep in a Cave, Neanderthals Did Something Remarkable 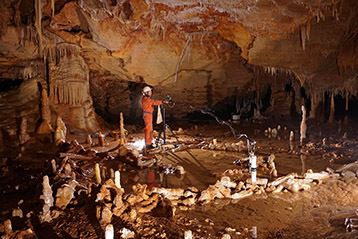 (P1) For tens of thousands of years, the secrets of France’s Bruniquel Cave went unknown, its mouth closed off by a rock slide. That began to change in the late ’80s, the Atlantic reported, when a boy named Bruno Kowalsczewski started clearing away what obstructed the opening; three years later, in 1990, the then-15-year-old’s 100-foot path allowed local cavers entry. One caver made it more than 1,000 feet in and found something wild: two stone rings up to 16 inches high intentionally made from pieces of chopped-up stalagmites (pillar-shaped mineral deposits that stick up from the ground), probably by Neanderthals some 176,500 years ago, scientists now say. A press release notes “until now the oldest formally proven cave use dated back only 38,000 years.”

(P2) While previous research had suggested the structures predated the arrival of modern humans in Europe around 45,000 years ago, the AP reports the notion that Neanderthals could have made them didn’t fit long-held assumptions that these early humans were incapable of the kind of complex behavior necessary to work underground. “Their presence at [1,102 feet] from the entrance of the cave indicates that humans from this period had already mastered the underground environment, which can be considered a major step in human modernity,” the researchers concluded in a study published online Wednesday in the journal Nature. The authors said the purpose of the oval structures—measuring 172 square feet and 25 square feet—is still a matter of speculation, though they may have served some symbolic or ritual purpose.

ExxonMobil CEO: World Needs Our Oil, ‘Like It or Not’

★★★★, Business, Weekly_ArticleMay 28, 2016
[Business ★★★★] (P1) Keep the oil taps flowing for the good of the people, the CEO and chair of ExxonMobil appealed to shareholders at what the Guardian says was a “long and fractious” annual meeting in Dallas on Wednesday. Rex Tillerson told attendees …
END_OF_DOCUMENT_TOKEN_TO_BE_REPLACED

Weekly_ArticleOctober 19, 2016
[World News ★★] (P1) The Thai King ruled over Thailand for 70 years, making him the longest ruling monarch. He died last week. (P2) People moved his body through Bangkok to the palace. Thousands of people watched the procession and many cried and prayed. For …
END_OF_DOCUMENT_TOKEN_TO_BE_REPLACED 1

Weekly_ArticleMarch 30, 2016
The IELTS Speaking (Part 1) covers a few general questions about familiar topics, lasting 4-5 minutes. The grading rubric is attached at the bottom. YOU Describe yourself. FAMILY Describe your family? Do you have a large or small family? How much time do …
END_OF_DOCUMENT_TOKEN_TO_BE_REPLACED