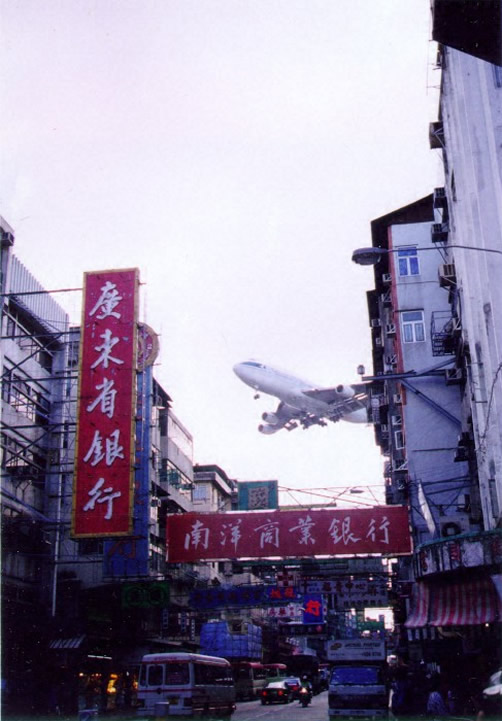 (P1) Kai Tak Airport, in the middle of Hong Kong, was once considered to be the world’s most dangerous place to land. The international airport served as a major Asian transportation hub between 1925 and 1998 when it was closed down. A new airport, Chek Lap Kok, was built on an island in Hong Kong harbor.

(P2) Landing at Kai Tak International Airport was not only a frightening and thrilling event for passengers but also a demanding and difficult task for pilots. It required a lot of training and maneuvering around many skyscrapers and the 700-meter high mountains that surround Hong Kong.

(P3) Pilots had to land manually, so visibility was more important than anywhere else. An orange and white checkerboard in the mountains told pilots where to turn in order to make the final landing approach.

(P4) When it closed down Kai Tak only had one runway, which extended into the sea. It was difficult to land during extreme weather conditions, especially when typhoon winds hit Britain’s former colony. Pilots sometimes aborted the first landing approach, swung the plane up and came around for another attempt.

(P5) In the course of time, Kai Tak outgrew its capacity. In 1996 over 30 million passengers landed every year, even though the airport was only designed to handle 24 million. The airport in the middle of Hong Kong made it difficult for city planners to build new skyscrapers because they would interfere with landing approaches.

(P6) For passengers who had window seats, landing at Kai Tak was an extraordinary experience. Planes flew so slow that you could actually see into people’s living rooms. Today, Kai Tak Airport is a cruise terminal, which can accommodate large passenger vessels and could make Hong Kong into a hub for Asian cruises.

Deep in a Cave, Neanderthals Did Something Remarkable

★★★★, Science, Weekly_ArticleMay 28, 2016
[Science ★★★★] (P1) For tens of thousands of years, the secrets of France’s Bruniquel Cave went unknown, its mouth closed off by a rock slide. That began to change in the late ’80s, the Atlantic reported, when a boy named Bruno …
END_OF_DOCUMENT_TOKEN_TO_BE_REPLACED

Business, Weekly_ArticleMay 28, 2016
[Business ★★★] (P1) India is forecasted to overtake Japan to become the world’s third-largest smartphone market next year to rank behind China and the United States, a report said Thursday. (P2) According to the latest research by industry tracker Strategy Analytics, …
END_OF_DOCUMENT_TOKEN_TO_BE_REPLACED

“How do I use the word “probably”?

Q&A, UncategorizedFebruary 11, 2020
“Probably” is a word you’ll hear often in English. Americans in particular use this word in daily conversations. The meaning is “almost certain; most likely based on the current knowledge.” It’s similar to “maybe,” but with a little more assurance …
END_OF_DOCUMENT_TOKEN_TO_BE_REPLACED 6

Weekly_ArticleAugust 31, 2016
[Animals ★] (P1) This news is about Bewick’s swans. These swans migrate every year. They fly from the Russian Arctic to Britain. This is 7,242 kilometers across 11 countries. (P2) There are fewer swans now than in the past. People shoot the …
END_OF_DOCUMENT_TOKEN_TO_BE_REPLACED 1