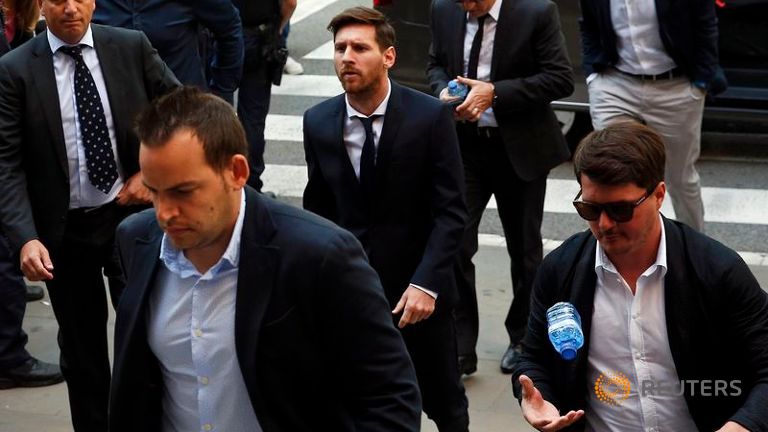 (P1) Soccer’s five-times World Player of the Year Lionel Messi arrived at a court in Barcelona on Thursday to testify against charges of tax evasion.

(P2) A few bypassers applauded the arrival of the Argentina and FC Barcelona player while several people shouted at him, but in contrast to when he appeared at a local court in 2013 to give evidence, there were no Barcelona supporters present.

(P3) Messi and his father, Jorge Horacio Messi, entered the court immediately without speaking to reporters.

(P4) The trial began on Tuesday although Messi missed the first and second day, which he was not obliged to attend, citing a back injury sustained in Argentina’s international friendly with Honduras last Friday.

(P5) Lionel and Jorge Horacio Messi are accused by the Spanish tax office of defrauding the government of 4.2 million euros ($4.7 million) between 2007 and 2009.

(P6) They could face jail terms of up to 22 months if found guilty, although it is customary in Spain that offenders of non-violent crime with a sentence of under two years do not serve time in jail.

(P7) The case centers on the player’s image rights and a web of shell companies allegedly used to evade taxes on income from those rights.

(P8) Tuesday’s hearing showed that Spain’s tax office made 20 inspections of Messi during its three-year investigation.

(P9) According to the prosecutors’ office, revenue was hidden using shell companies in Uruguay, Belize, Switzerland, and the United Kingdom.

(P10) Messi and his father paid five million euros to the tax authorities as a “corrective” measure after being formally investigated in June 2013.

(p12) Mascherano accepted a one-year prison sentence for tax evasion as part of a plea bargain in January, although is not expected to serve time in jail.

(P13) Messi moved to Barcelona from his birthplace of Rosario, Argentina in 2000, becoming a Spanish citizen in 2005.

(P14) He is 10th on Forbes Magazine’s list of the world’s highest-earning athletes over the past decade, with an estimated income of $350 million.

(P15) Messi has scored 453 goals in 531 appearances for Barca in all competitions.

(P17) Messi is also captain of Argentina and will rejoin the team immediately after his court appearance to prepare for the Copa America in the USA, playing their first game against holders Chile on Jun. 7.

Weekly_ArticleJune 3, 2016
[World News ★★★] (P1) The figure bobbing in the water looked “like a doll, arms outstretched.” But what German humanitarian organization Sea-Watch pulled from the Mediterranean Sea on Friday was not a doll. “I took hold of the forearm of the …
END_OF_DOCUMENT_TOKEN_TO_BE_REPLACED 1

Health, Weekly_ArticleSeptember 27, 2016
[Health ★★] (P1) People who use the Internet too much may have mental health problems, especially if they cannot get online regularly. A survey into the Internet habits of 254 students found 107 students were addicted or had problems like …
END_OF_DOCUMENT_TOKEN_TO_BE_REPLACED 1

WHICH PARTS OF THE WORLD WILL HAVE THE WORST DISASTERS?

Weekly_ArticleMarch 27, 2016
[ENVIRONMENT ★★★] WHICH PARTS OF THE WORLD WILL HAVE THE WORST DISASTERS? (P1) Asia has the largest number of people exposed to NATURAL DISASTERS, but African countries are the most VULNERABLE to them, largely because of political INSTABILITY, CORRUPTION, POVERTY, and …
END_OF_DOCUMENT_TOKEN_TO_BE_REPLACED 1