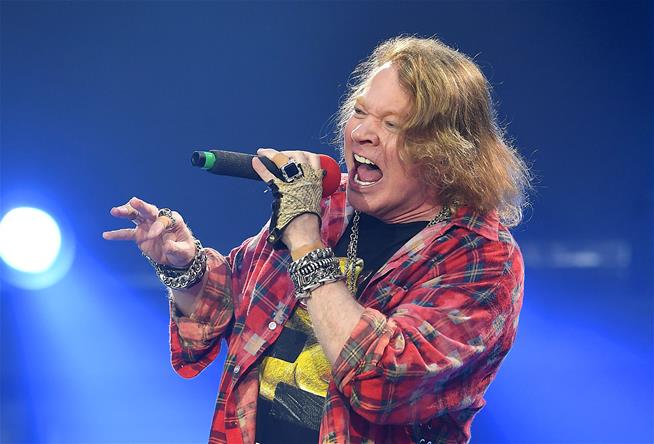 (P1) Axl Rose has been getting back in the spotlight of late—including a show last month with AC/DC and a reunion before that with Slash of Guns N’ Roses, which might explain why he’s getting a little defensive about his image. Torrent Freak reports that Rose’s representatives are trying to erase a “fat photo” of him from 2010 by sending takedown notices to Google. The image, shot during a concert in Winnipeg, has since spawned countless memes, notes CNET, including “Oh, sweet pie ‘o mine.” The takedown notice claims copyright infringement thusly: “Please be advised that no permission has been granted to publish the copyright image so we cannot direct you to an authorized example of it.”

(P2) The attempt “is a bit of a long shot,” notes Spin, given that other celebs such as Beyonce and Michael Jordan have failed in similar quests. Torrent Freak actually tracked down the Winnipeg Free Press photographer who took the image, Boris Minkevich, who was surprised to learn of Rose’s efforts to scrub the internet of the image. The issue is tricky because some shows require photographers to sign release contracts that can restrict the subsequent use of any images, and it’s not clear whether Minkevich had to so half-a-decade ago.

Weekly_ArticleMarch 13, 2016
[SPORTS ★★] IS JORDAN SPIETH DONE WITH SOCIAL MEDIA? (P1) World number one golfer Jordan Spieth blamed a Twitter TIRADE at his CRITICS on FRUSTRATION and BOREDOM. (P2) The 22-year-old American, defending CHAMPION at this week’s event just as he will be at …
END_OF_DOCUMENT_TOKEN_TO_BE_REPLACED 1

Weekly_ArticleFebruary 14, 2016
[WORLD NEWS ★★] WILL THE NICARAGUA CANAL BE BUILT? (P1) Manuel Coronel Kautz isn’t a man who GIVES UP easily. This is a good thing. Because as head of Nicaragua’s CANAL Authority, he’s seen the $50 billion project suffer SETBACK after setback. …
END_OF_DOCUMENT_TOKEN_TO_BE_REPLACED 1

WHAT BEER-MAKING CAN TEACH YOU ABOUT THE BUSINESS WORLD

Business, Weekly_ArticleJuly 25, 2015
[BUSINESS ★★★] WHAT BEER-MAKING CAN TEACH YOU ABOUT THE BUSINESS WORLD (P1) Next time you are in your local grocery story, step in to look a little more closely at the beer cooler. Amid the brightly colored, creative packaging lies the …
END_OF_DOCUMENT_TOKEN_TO_BE_REPLACED 1