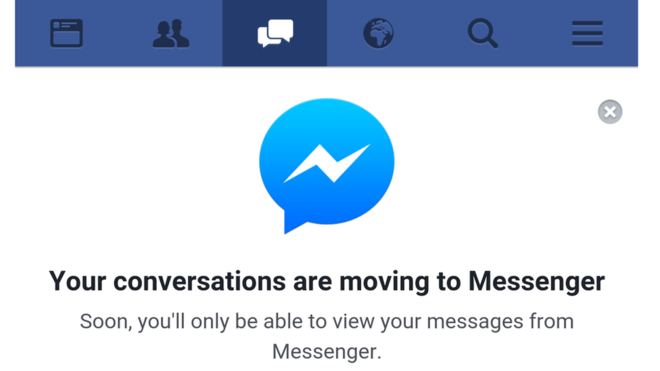 (P1) Facebook users on Android devices are being notified that they will no longer be able to access messages without the Messenger app.

(P2) The function for members to read messages by accessing the social network on a mobile phone web browser is being disabled.

(P3) A message currently appears informing users of the coming change. On some handsets, the Play Store then launches.

(P5) “Using the Messenger app is faster and enables richer interactions. We’re continuing to bring the best experiences we can to the 900 million people on Messenger,” it said in a statement.

(P6) Messages are already inaccessible via the official Facebook app.

(P7) However, Devin Coldewey at technology news website Tech Crunch described it as “a hostile move”. He wrote, “Surely the mobile site is much used by people who have good reason not to download the app.”

(P8) Some users have complained that they do not wish to use the app, citing battery life and privacy concerns.

(P10) Analyst Martin Garner from CCS Insight told the BBC messaging is a key area for the company.

(P11) “This move underlines what an important platform messaging is becoming for Facebook,” he said.

(P12) “Messaging is undoubtedly the next growth driver for revenue but it also will be key to developing highly sophisticated artificial intelligence solutions.

(P13) “People will get used to a dedicated messaging app despite their initial objections. Facebook just needs to make sure that the app is well-written and does not start becoming a big drain on battery life.”

More Than 40% of Top Managers Want to Leave Russia – Poll

Business, OrganizationsNovember 23, 2022
Remote working. Social distancing.  Zoom meetings. E-commerce. Online conferences. Digital processes. Many of us did not expect that we would encounter these concepts every day – not until March 2020. Since the COVID-19 pandemic, from our work environment to company …
END_OF_DOCUMENT_TOKEN_TO_BE_REPLACED