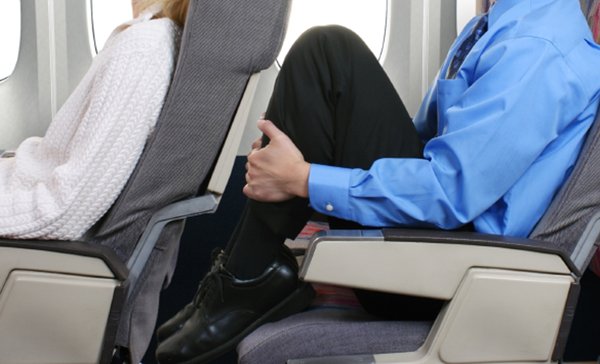 (P1) An Air Canada passenger says a cramped 10-hour flight from Chile to Toronto in January has taken a serious toll on his otherwise impeccable health, and he wants the airline to “take a good hard look at what they’re doing,” he tells the CBC. Colin Savage, a 64-year-old avid cyclist and marathon runner, journeyed to Argentina on a hiking trip. After turbulence forced the passengers to stay seated for most of the flight, Savage, who is 6-foot-2, reports being cramped against the seat in front of him. Almost two days after his return home, Savage says he felt severe pain in his lower back. Doctors told him that he had deep vein thrombosis, and that blood clots had traveled up his legs and into his lungs, nearly killing him. The World Health Organization says anyone who travels in a cramped space for more than four hours is at risk; the CDC cites the same number of hours.

(P2) Air Canada said in a statement that the WHO “has advised there is no risk with air travel for healthy passengers” and that travel by train, bus, or car carries “similar risk.” A 2010 Telegraph article on the death of a healthy 36-year-old woman who spent most of a transatlantic flight asleep and died after blood clots reached her heart and lungs explain the mechanics: The veins in the pelvis are somewhat squashed when seated, making for sluggish blood flow in the calves. The reduced flow helps raise the risk of clots, an issue exacerbated by reduced oxygen pressure. As far as cramped spaces go, USA Today reported that seat pitch, the distance from a point on one seat to the same point on the one behind it, and a good approximation of legroom, has shrunk 2 to 5 inches, based on carrier, in 20 years. While airlines are making more extra-legroom seats available, the Wall Street Journal reports they make up more than a quarter of United’s coach seats, travelers have to pay extra.

Technology, Weekly_ArticleJune 9, 2016
[Technology ★★★] (P1) Facebook users on Android devices are being notified that they will no longer be able to access messages without the Messenger app. (P2) The function for members to read messages by accessing the social network on a mobile …
END_OF_DOCUMENT_TOKEN_TO_BE_REPLACED

★★★★, Weekly_ArticleJune 3, 2016
[Sports ★★★★] (P1) Soccer’s five-times World Player of the Year Lionel Messi arrived at a court in Barcelona on Thursday to testify against charges of tax evasion. (P2) A few bypassers applauded the arrival of the Argentina and FC Barcelona player …
END_OF_DOCUMENT_TOKEN_TO_BE_REPLACED 1