Microsoft Buying LinkedIn for $26B 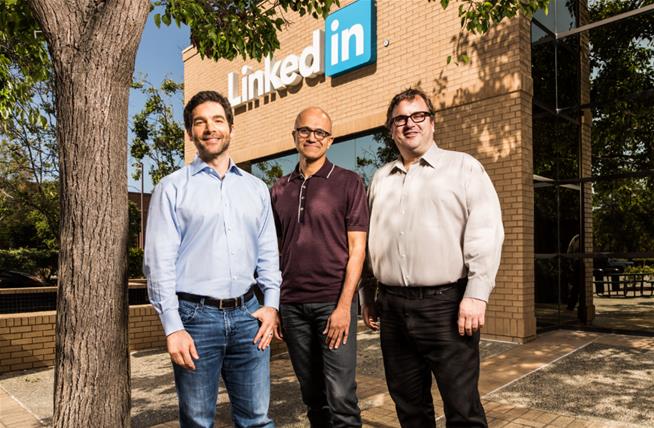 (P1) Microsoft has just announced one of the biggest deals in its history, per the Telegraph. The company says it will buy LinkedIn for $26.2 billion in cash, or $196 per share, a 50% improvement on its closing price Friday, reports the Wall Street Journal. Microsoft says LinkedIn will “retain its distinct brand, culture, and independence,” while CEO Jeff Weiner will keep his post, reporting to Microsoft CEO Satya Nadella. The deal, approved by both boards and subject to approval by LinkedIn’s shareholders, is expected to close by the end of the year.

(P2) “I’ve been thinking about this for a long time,” Nadella says in a video. “The LinkedIn team has grown a fantastic business centered on connecting the world’s professionals,” he adds in a release. “Together we can accelerate the growth of LinkedIn, as well as Microsoft Office 365 and Dynamics as we seek to empower every person and organization on the planet.” Weiner adds there’s “a lot of excitement” surrounding the deal, which will let both companies “dream big.” LinkedIn’s shares jumped 48% to $194.28 as the deal was announced, while Microsoft’s shares fell 3.3%, per Reuters.

Weekly_ArticleDecember 20, 2016
[Animals ★] (P1) Reindeer live in Finland. They walk freely. This is a problem. They can walk into roads. Around 4,000 animals die every year from cars. (P2) People try to solve this problem. They make a new app. When you see a …
END_OF_DOCUMENT_TOKEN_TO_BE_REPLACED 1

Weekly_ArticleJuly 18, 2015
[ENVIRONMENT ★★★] HUGE NUMBER OF RARE TURTLE SPECIES FOUND IN SHIPPING CRATE (P1) Last month, turtle EXPERTS thought there were fewer than 3,000 Philippine forest turtles left in the world. They were SHOCKED when they found 3,800 more — STACKED on …
END_OF_DOCUMENT_TOKEN_TO_BE_REPLACED 1