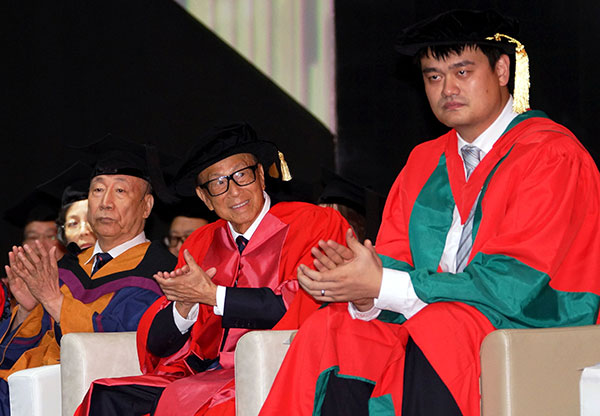 (P2) Sound bites from commencement speeches are usually a hot topic online during graduation season for Chinese universities every summer.

(P3) Li’s speech, in the title of “The Future is Right Ahead”, is the latest click magnet.

(P4) The 88-year-old told 2,161 graduates that to stand out in an era when technology empowers machines with the ability to make observations and think logically, humans need to keep on learning with a humble attitude, to be open to new ideas and to be compassionate.

(P5) “We have to be on high alert to the tendency of closing up” one’s eyes and ears to new, unfamiliar ideas, said the honorary president of Shantou University Council.

(P6) “False judgments made through inertia in thinking will hold us back,” he said. “Technology is the foundation for high economic growth, and talent and innovation are the engines. But a tolerant society is the important fuel.”

(P7) “It is an age of sharp transformations, but at the same time an age of force of character,” Li said. “Never forget that it is a blessing to be capable of helping someone.”

(P8) The Li Ka Shing Foundation has been sponsoring Shantou University since the school’s founding in 1981. Financial support from the foundation will add up to HK$8 billion ($1.03 billion) by 2018.

(P9) Li has been attending commencement at Shantou University and delivering a speech for 15 consecutive years, since 2002.

(P10) The foundation also invited Yao Ming, former NBA star, and creator of the Yao Foundation, to give a speech at commencement this year.

(P12) “Life has no rehearsals. No one can ensure you a happy ending, even if you go all-out. But we can choose the attitude to face failures,” Yao said.

(P13) Yao said that he missed 3,046 field goals and had 1,304 turnovers throughout his NBA career. “All the mistakes and successes made up my complete NBA career,” he said.

(P14) Zhong Hui, one of the graduates, described the commencement ceremonies this year as “stunning”. She called that Li’s and Yao’s speeches were “inspirational”.

Chapter 6-5: You Can’t Repeat the Past

Weekly_ArticleJanuary 19, 2016
Chapter 6-5: You Can’t Repeat the Past Aim: In this 30-minute lesson, you will go over the part 6-5 of the book. Go over comprehension questions after each paragraph, and practice using new expressions. After saying hello, read the following part …
END_OF_DOCUMENT_TOKEN_TO_BE_REPLACED

★★★, Weekly_ArticleJanuary 11, 2017
[Sports ★★★] (P1) A French cyclist has set a new record for riding 14 miles in one hour. If that doesn’t sound so remarkable, the world record is 33.8 miles, consider the category in which Robert Marchand was competing: over …
END_OF_DOCUMENT_TOKEN_TO_BE_REPLACED 1

What are some ways I can talk to native speakers of English online?

Q&A, UncategorizedDecember 3, 2019
When you’re trying to identify online communities where you can work with fellow English-language learners, you should check their community rules. Strong, genuinely helpful groups will clearly state that they do not allow disrespectful language, discrimination, religious discussions, advertisements, etc. …
END_OF_DOCUMENT_TOKEN_TO_BE_REPLACED