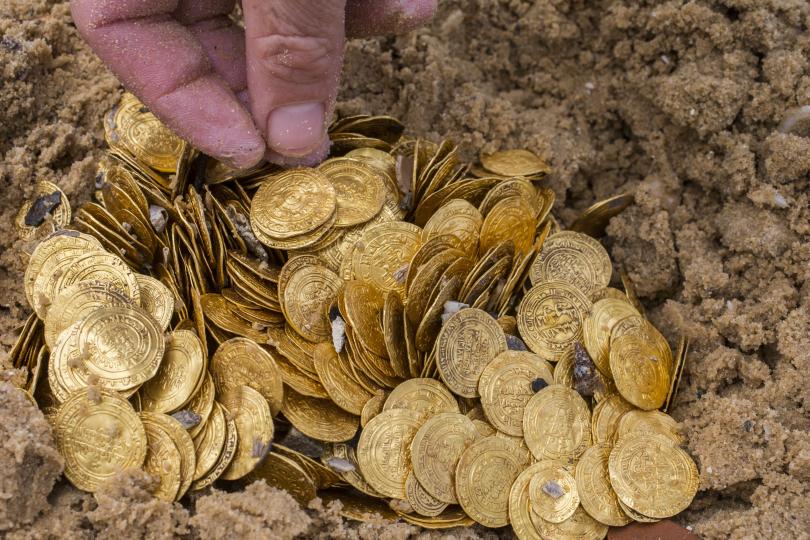 (P1) An amateur archaeologist struck gold when he came across a hoard of old coins in northern Germany. Florian Bautsch uncovered 10 gold coins last October using a metal detector and on examination of the scene, professionals found 117 more.

(P2) The coins are of French, Belgian, Italian and Austro-Hungarian origin and date from 1831 to 1910. They’re believed to have been buried during the Nazi era or shortly after the Second World War.

(P3) Two aluminum seals featuring swastika crosses, eagles, and the words “Reichsbank Berlin 244” were also in discovered in the same field. Researchers think the coins were part of the German central bank’s gold reserves and were probably stolen.

(P4) The hoard has been valued at around 45,000 euro, but unfortunately for Florian Bautsch, it’s not finders keepers. He reportedly receives a relatively modest finder’s fee of 2.5 thousand euro, and the coins will go on display at the local museum next week.

Thoughts, Weekly_ArticleJuly 21, 2016
[Thoughts ★★] (P1) A new report describes life in 2116. There are many tall buildings and underwater cities. Experts said the way we live, work, and play will be very different. They said that 25 years ago, people could not imagine …
END_OF_DOCUMENT_TOKEN_TO_BE_REPLACED 1

Weekly_ArticleJune 29, 2016
[World News ★] (P1) June 21st is International Yoga Day. 30,000 people in India did yoga on that day. One of them was the Indian Prime Minister, Narendra Modi. (P2) He told the world to embrace yoga because it helps people connect with …
END_OF_DOCUMENT_TOKEN_TO_BE_REPLACED 1

Weekly_ArticleMay 7, 2016
[Travel News ★★★] (P1) Singapore is the world’s most expensive city – for the second time in a row. The British magazine The Economist compared over 130 of the world’s major cities. Paris, Oslo, and Zurich follow the Southeast Asian metropolis as the most expensive cities in the world. (P2) …
END_OF_DOCUMENT_TOKEN_TO_BE_REPLACED

Weekly_ArticleNovember 23, 2015
Below is the prepared text of the Commencement address by Salman Khan ’98, MEng ‘98, founder of the Khan Academy, for MIT’s 146th Commencement held June 8, 2012.s. On a similar vain, inertia, pride or fear should never be the …
END_OF_DOCUMENT_TOKEN_TO_BE_REPLACED