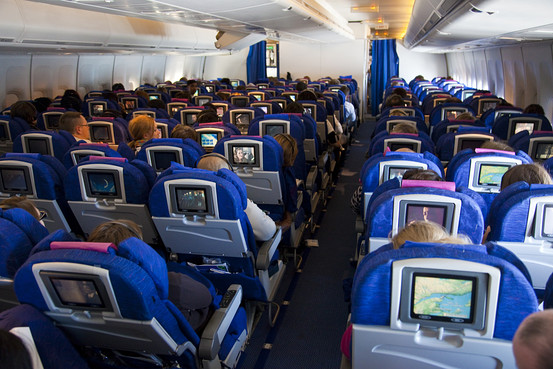 1) THE SKY MARSHALL NEEDS YOUR SEAT

These guys still fly to protect you, and they’re sometimes seated without prior warning.

If one of them shows up and needs your seat, you’ll either be bumped off the flight entirely or reassigned.

And you won’t even get an explanation (obviously, the authorities don’t want you to blab that there’s a sky marshal on board).

2) YOU MESSED WITH THE CREW

When Bobby Abtahi, a Dallas lawyer, was rushing through one of those large revolving doors at New York’s LaGuardia Airport, he supposedly “cut off” a Virgin America flight attendant who was attempting to enter at the same time.

He was booted off his flight after the flight attendant complained to the captain flying his plane.

At least Virgin later apologized for the “misunderstanding” and refunded his fare.

(P3) YOU OR YOUR CHILD WON’T LISTEN

Actually, if you do anything to annoy the cabin crew or fail to obey their instructions and ignore lit placard signs, you risk being booted.

4) THE AIRLINE OVERSELLS OR DOUBLE-BOOKS A SEAT

Even in this era of sophisticated computer systems or perhaps because of them, airlines oversell flights and even, on rare occasions, sell the same seat to two people.

Passengers can be eligible for compensation in cash when this happens.

In 2013, Delta was fined more than $1 million for, among other bumping violations, not informing passengers that they’re entitled to cash compensation rather than a travel voucher, and last year American Airlines paid a fine for similar infractions.

Again, this is up to cabin crew, but if you wear a T-shirt with offensive wording, are exposing too much flesh, or are otherwise provocatively dressed, flight attendants and cockpit crew have been known to kick people off the plane or refuse to let them board.

Spirit Airlines once deplaned a passenger for refusing to pull up his baggy, underwear-revealing pants, and Southwest has been known to refuse passage to passengers whose clothes reveal too much cleavage or other body parts.

Thankfully, airlines no longer require employees to wear suits and ties when flying on company passes, but they’ll take it out on you if they don’t approve of your fashion sense.

If you’re obviously inebriated or otherwise impaired, don’t expect to fly. You won’t be breathalyzed so it’s entirely up to crewmember discretion.

Weekly_ArticleJuly 21, 2016
[Sports ★★★] (P1) After an epic duel at the British Open, Henrik Stenson has claimed his first major title, the AP reports. Stenson shot an 8-under 63 on Sunday to beat Phil Mickelson by three strokes, becoming the first man from Sweden to …
END_OF_DOCUMENT_TOKEN_TO_BE_REPLACED 1

Weekly_ArticleMay 14, 2015
[WORLD NEWS★] FALLING TO EARTH: UNMANNED RUSSIAN SPACECRAFT ‘HAS NOWHERE ELSE TO GO’ (P1) An unmanned Russian cargo spacecraft ferrying supplies to the International Space Station is plunging back to Earth and apparently out of control. (P2) The Russian space agency is trying …
END_OF_DOCUMENT_TOKEN_TO_BE_REPLACED 1

Weekly_ArticleFebruary 21, 2016
[TRAVEL ★★] WOMAN KEEPS TRYING TO FLY WITHOUT A TICKET [BUSINESS ★] COLOMBIA SENDS FLOWERS TO THE WORLD [WORLD NEWS ★★] CANADIAN ISLAND OFFERS REFUGE TO HATERS OF DONALD TRUMP [LIFE ★] A LETTER FROM A DAUGHTER TO A MOTHER [BUSINESS ★★] WAL-MART IS NOT DOING WELL IN BRAZIL [WORLD …
END_OF_DOCUMENT_TOKEN_TO_BE_REPLACED

MICROBEADS SOUND HARMLESS, BUT ARE DANGEROUS

Technology, Weekly_ArticleDecember 13, 2015
[TECHNOLOGY ★] MICROBEADS SOUND HARMLESS, BUT ARE DANGEROUS (P1) The US is set to ban personal care products that contain microbeads after the House of Representatives approved a bill that would PHASE THEM OUT. (P2) The bill will now go to the …
END_OF_DOCUMENT_TOKEN_TO_BE_REPLACED 1