Yahoo: Still no buyer as losses widen to $440m 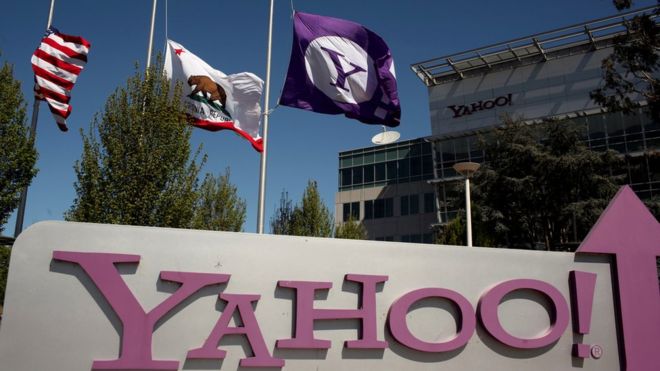 (P1) Yahoo gave no update on attempts to sell its core internet business as the firm slumped to a $440m (£332m) loss in the second quarter.

(P2) Investors are likely to be disappointed by the lack of an update on the sale of its search and advertising operations.

(P3) Chief executive Marissa Mayer said only that the board had made “great progress on strategic alternatives”.

(P4) Yahoo reported a $60m rise in revenue to $1.3bn for the three months to June. The increase was mainly generated by its core internet business, although mobile revenue jumped from $252m to $378m.

(p5) Much of the speculation about Yahoo’s future is centered on Verizon, the telecoms giant that recently bought AOL, another faded internet star.

(P6) AT&T and a partnership between Quicken Loans founder Dan Gilbert and billionaire Warren Buffett were also thought to be in contention.

(P7) Yahoo could announce a buyer by the end of the month, according to some reports. It remained unclear how much Yahoo might fetch, with estimates ranging from $5bn to $8bn.

(P8) In a recent note, BGC analyst Colin Gillis wrote: “We expect any offer in the range of $5-plus billion should be accepted by the Yahoo board to bring the process to a close.”

(P10) The future of Yahoo has been in question for several years and Ms. Mayer has made little progress in returning the company to profit.

(P11) Her plan to spin-off Yahoo’s stake in Alibaba was scrapped last year in favor of selling the search and advertising business.

(P12) Ms. Mayer said despite the impending sale, she was still focused on increasing growth and cutting costs: “It is important to maximize the value of Yahoo in any scenario.”

(P14) The company faced another hurdle last week after a report alleged many of the company’s technology patents were flawed, lowering their value.

★★★★, Weekly_ArticleJuly 21, 2016
[Travel ★★★★] 1) THE SKY MARSHALL NEEDS YOUR SEAT These guys still fly to protect you, and they’re sometimes seated without prior warning. If one of them shows up and needs your seat, you’ll either be bumped off the flight entirely …
END_OF_DOCUMENT_TOKEN_TO_BE_REPLACED 1

Best passports in the world revealed in new index

★★★★, Weekly_ArticleAugust 17, 2016
[Travel ★★★★) (P1) UAE nationals have the most powerful passport in the Gulf Cooperation Council (GCC) region, with swift entry to 120 countries around the globe, according to the latest power rankings by a financial consultancy firm. (P2) Arton Capital’s …
END_OF_DOCUMENT_TOKEN_TO_BE_REPLACED 1

Technology, Weekly_ArticleAugust 29, 2015
[TECHNOLOGY ★★] MUTILATED TOUCAN GETS 3D-PRINTED BEAK PROSTHESIS (P1) In a GROUND-BREAKING project, a Brazilian toucan which lost the upper part of its BEAK while being TRAFFICKED has been fitted with a PROSTHESIS made with a 3D printer. (P2) The female …
END_OF_DOCUMENT_TOKEN_TO_BE_REPLACED 1