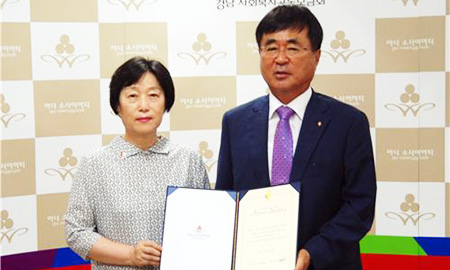 (P1) Retiring policewoman Park Soon-ja has joined the “Honor Society” for donating 100 million won ($87,000) to a local welfare center in Changwon, South Gyeongsang Province. The honor is bestowed upon those whose donations surpass 100 million won by the Community Chest of Korea, the largest nonprofit welfare institution in Korea.

(P2) The 61-year old outgoing superintendent said she owes a debt of gratitude to society.
“For nearly 40 years while serving as a police officer, I have received many honors from the country,” said Park. “As I leave the force I feel strongly that it’s time for me to help the needy neighborhoods where I have served.”

(P3) Park served as a police officer for 37 years. She first joined the Masan Jungbu Police Station as a constable in 1979, one of the few female police officers at the time.

(P4) Having served various posts including the 112 emergency control center and the female and juvenile divisions, she has spent most of her career dealing with people’s requests.

(P6) While serving as a police officer, she regularly visited local senior welfare centers to perform various volunteer efforts such as bathing those with serious illnesses and washing their clothes.

(P7) “It was not an easy decision to donate her severance pay,” said the head manager of the beneficiary local welfare community. “The donation will be used to help needy people in the community.”

Health, Weekly_ArticleJuly 27, 2016
[Health ★★★] (P1) Dubai Health Authority (DHA) held a smart clinic to raise awareness about childhood obesity and its related health problems. (P2) Obesity is a risk factor for a number of chronic diseases and experts at the smart clinic …
END_OF_DOCUMENT_TOKEN_TO_BE_REPLACED 1

★★★★, Life, Weekly_ArticleJune 16, 2016
[Life ★★★★] Ambitions. Dreams. Plans. If these words drive and motivate you, then you definitely aspire to be successful. Being aspirational is one of the most positive qualities one can possess because it pushes you forward to become a better-equipped individual. …
END_OF_DOCUMENT_TOKEN_TO_BE_REPLACED

Weekly_ArticleApril 23, 2016
[Animals ★★] People in Los Angeles, California, can have a cup of coffee and play with dogs at the same time at a dog café. Every single one of the dogs has been rescued from shelters. Now they are being …
END_OF_DOCUMENT_TOKEN_TO_BE_REPLACED 1